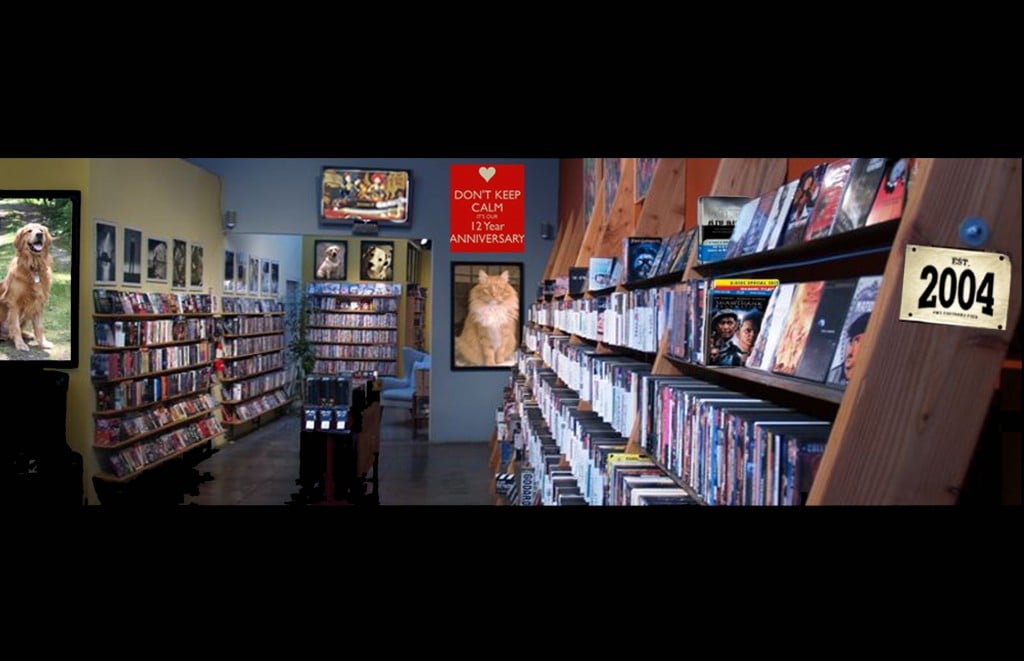 Philadelphia Story for me. I think that's it for this week.

And rest up! November gets busier and busier.
Reactions: Jake Lipson

I'll be getting The Philadelphia Story for sure. May pick up Cars 3 and I'm interested in the UHDs of Westworld and A Few Good Men.

Thank you, Mike for all your work.

It's early November, which must mean it's time to buy another new Pixar title -- oh, wait, no, sorry, that was reflexive. Actually, I thought Cars 3 was bad, so I'll break that tradition unfortunately. At least the Amazon/Disney feud is no sweat off my back this particular week.

For once, I am actually buying a title that is not covered in Mike's already extensive post, so I'm going to talk about that for the benefit of any of the rest of you who may be interested.

This week, I'm getting Funimation's release of YOUR NAME, a terrific animated film from Japan. I saw this at my arthouse this past April after it came out in Japan last year and was completely bowled over by it. It starts out as a body-switch comedy, which is how the trailer sells it, as two teenagers from opposite backgrounds (a boy from Tokyo and a girl from a smaller, close-knit rural town) who have never met start having dreams about each other's lives and come to realize that in their "dream" states, they are actually switching places with each other. It seems like it's going to be sort of a gender-swap Big or Freaky Friday kind of thing, which is good enough since the characters are fun to watch, richly developed and easy to invest in.

But there's something else at play here which takes the movie to a whole other level once it's revealed, and I don't want to say what it is for fear of spoilers, but I will say that the pivot in the middle of the movie is one of the best twists I have ever seen -- thoroughly unexpected but equally wonderful and really earned and executed really well. My jaw dropped in the theater when it happened, and the second half post-twist is just as good, if not better, than the first half when it was playing by more traditional body switch rules.

By the end of the film you've been on a real emotional journey, and I was very deeply moved, and I just loved it. I could feel the electricity in the room because the whole sold-out audience was really engaged and into it and responsive, and when it was over, sure enough, everybody burst into applause.

I went back to see it again less than two weeks later and was delighted to find that, even though I now knew the twist, it still held up amazingly well as a piece of storytelling and I was no less thrilled the second time. And boy, the animation is drop-dead gorgeous throughout.

It has had an unusually long (for 2017) theater-to-Blu window of seven months rather than three, and I'm really looking forward to getting it in the mail this week and being able to see it again. (The Japanese Blu came out a couple months ago, but I knew the U.S. one would be along sooner than later and didn't bother importing.) And now, here it is.

The theatrical gross was $5 million here, but worldwide it has been much more of a phenomenon, and broke Spirited Away's 16-year-old all-time gross record for an anime film. Paramount just won the rights for J.J. Abrams and Bad Robot to produce a live-action Hollywood version, because of course they did, and Eric Heisserer, who wrote Arrival, is writing that version. Putting aside any debate on the Hollywood version for now, since that's more appropriate for another thread and another time, the Japanese version is just sensational, and if you think this sounds interesting, I would recommend a blind purchase on this (especially in order to see it before anyone ruins the twist for you, which I won't but someone else might.) Funimation is releasing two different Blu-ray editions, plus of course the standalone DVD. The basic one I've pictured above is the Blu-ray+DVD combo. Amazon has been price-change-happy on this for a while. Right now it's $19.99, but a couple days ago it shot up to $24.99 after already having been priced at $19.99 before that. I of course have no idea how long Amazon intends to keep it at $19.99, but if you're interested, I'd go ahead and grab it before they change it. That one is here: https://www.amazon.com/gp/product/B...9-399c-49e1-901a-7b8786e59436&pf_rd_i=desktop.

It's also available in a higher-end gift set, which appears to include the same movie discs as the standard version, plus the soundtrack and an art book and what looks like digipack packinging. That one is $61.49. I actually got the soundtrack on its own back in April since I really loved it after seeing the film, and while the art book would be nice to have, I can do without. So I'm just getting the standard release, but if you're like me and you've already love the film, but don't have the soundtrack, then it does look like a pretty sweet box if you've got that kind of money to spend.

Anyway, that's my long report for this week. Hopefully it helped some of you. Since this does not appear to be coming with a digital copy and isn't even listed at Vudu, I would suspect it may be hard to find for rent, which is another reason I would recommend a blind purchase if you find it interesting. It really is one of my very favorites of the year an I expect to play it a lot. I saw it in theaters in Japanese, but there was also an English dub produced and released if you prefer that, and the Blu-ray will of course include both audio tracks.

On another note, Best Buy has a listing for a new Blu-ray reissue of Pixar's Brave this week for $22.99 on the website here: https://www.bestbuy.com/site/brave-blu-ray-2012/6076301.p?skuId=6076301. Details are sketchy and there's no cover artwork, but if I had to guess, I would think this is similar to Disney's other recent reissues of the Pixar catalog films, which drop the DVDs from previous combo packs and replace it with a digital copy code, essentially making them a Blu-ray single instead of a combo pack. Most of the others have ugly new cover artwork with the giant floating head of a single character taking up the entire front of the box against a solid color background, so if that pattern continues here I would suspect Merida has to be the one with the giant head this time. All of this is just conjecture on my part, but the only Pixar films which are not currently being sold like this are Inside Out, Good Dinosaur, Finding Dory and, until now, Brave, so it seem like they are turning to this release model for all of their older titles and phasing out the combo packs except for new releases.
Reactions: bujaki

Thanks once again for the Round Up Mike

Barnes & Noble should be sending The Philadelphia Story to me ...

For those that are interested, Death Rides a Horse and The Mercenary blurays are $12.99 each at the Kino sale (free shipping in the US at $50.00 or more in purchases...) Kino sale ends November 14 ...

So no Brick and Mortar stores has the Potter films in UHD? Amazon has yet to provide a delivery date for Sorcerer's Stone and Chamber of Secrets so I was hoping I could cancel that order and buy it in a store.

Thanks again for another fine RoundUp!

I'll have the review up for He Walked by Night later today. It only came in on Friday, and I had another Tuesday release (not in your listing) already on tap to review Saturday. Todd will be handling the Disney company's offerings from Cars 3 onward.

I'll pick up Cars 3 and The Philadelphia Story this week.

Apropos of nothing: Cars 3 is listed as being available for sale on bluray at Costco per the Costco Connection .. http://www.costcoconnection.com/connection/201711?pg=64#pg64

So...Cartwheel (Target) has a bunch of titles available with coupon: everything from Spider-Man Homecoming straight through The Tooth Fairy (BD, DVD and 4k are all on the list).

Last week's iBotta over for $3 cash back on Spider-Man Homecoming is still active. Ebates 1% cash back at BB is still active as well. The offer says "today only," but it's been saying that for over a month now.

I will be getting Cars 3...just don't know when yet. We're heading to the happiest place on Earth this week and I won't be able to watch until we get home. But Disney Pixar titles don't go on sale enough for me to wait. I've had a hankering over the last three weeks or so to see the movie again. So I'll likely just bite and get it.

I've heard nothing but good things about Westworld, but I'm wary of just buying "because."

Maybe LaLaLand and Mummy for $30 at BB?

Just The Philadelphia Story for me. I'm leaning toward actually going to Barnes & Noble, since I'll at least get the 10 percent member discount if my 20 percent off coupon doesn't work, but it's election day and I'm not sure how long of an evening I want to make it if I go shopping and get dinner before I vote.

Three new and one from a couple of months ago for me this week.

Most anticipated: He Walked By Night (this is a favorite of mine)
B&N Purchases: The Philadelphia Story (along with Rebecca)
Pre-ordered: Into the Night (though RAH's review has me a bit concerned)

Mike Frezon said:
Philadelphia Story for me.
Click to expand...

I thought you were going to get The Phil-a-dell-ee-uh Girl instead?

Wayne_j said:
So no Brick and Mortar stores has the Potter films in UHD? Amazon has yet to provide a delivery date for Sorcerer's Stone and Chamber of Secrets so I was hoping I could cancel that order and buy it in a store.
Click to expand...

Best Buy will have the individual 1-4 4K in store. I'm trying to find out about the Boxset, but I think I've read it will be instock.

I will check Best Buy's stock Tuesday morning and then cancel my Amazon order if it hasn't shipped yet. No need to get the box set since I got 5-8 when they were released earlier this year.

I'll likely pick up Cars 3 at some point, but it will be the 3D version from the UK.

I'm intrigued by Mother Krampus, but will wait for a few reviews first.

Wayne_j said:
I will check Best Buy's stock Tuesday morning and then cancel my Amazon order if it hasn't shipped yet. No need to get the box set since I got 5-8 when they were released earlier this year.
Click to expand...

Not really on my radar in general. I have the Hogwarts set with the Blurays and Bonus discs so while I do need the 4K discs, but I'm not paying $18-20 ea for the 8 discs I need. The UK 4K only 8 disc set is around $100 and surely will drop to $60-70 soon enough and possibly $50 given their boxset history so I can wait for now unless there is something massive improved in the transfer -- early reports have not reported spectacular improvements
Reactions: sidburyjr

Jeff Cooper said:
So is Cars 3 not being released in 3D in the US? The last 8 Pixar movies were....
Click to expand...

Apparently not. Disappointing, as I'd hoped maybe Pixar and Marvel titles might still be some of the few 3D releases that continued in the US. I think this is the first Pixar 4K release, so it looks like they've dropped 3D for 4K.

But you can order the region-free 3D from Amazon.co.uk for roughly $24 (plus shipping, possibly).