Another really nice week of new releases! AND...there are even some really nice EXCLUSIVES to report!

So, I hope there's something for you in this week's releases.

V for Vendetta for me, perfect release date just in time for the 5th of November, I might have gotten Game of Thrones if I didn't already have seasons 1 and 8 in UHD.

Thank you for your work, Mike! Nothing for me next week...at least from the United States.

Last year's Staged Concert version of Les Miserables with Alfie Boe and Michael Ball is finally receiving a physical disc release next week, but not here. America got a streaming release back in August and will get a physical CD release of the audio as a live album on November 24. But for some inexplicable reason, the physical Blu-ray is only being released across the pond. So this is one of those rare cases where I need to import from Amazon UK. Fortunately I can do that because the disc is listed as being region free. 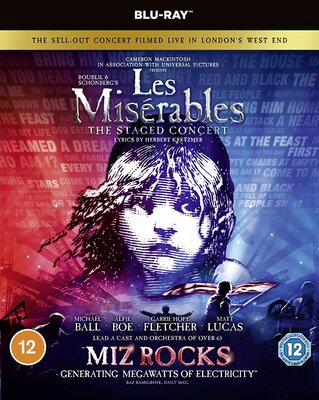 Release date is Monday, November 2. Given the cost associated with importing, I chose the slow shipping speed to save money, so Amazon is currently estimating that I will actually receive it somewhere between November 13-24. That's fine.

Also, over here in America, Back to the Future: The Ultimate Visual History is being re-released in an updated version. This is a coffee-table book that originally came out in (of course) 2015. For some reason, I never got the original edition, even though it would obviously interest me because I love those films. So I've had the new one pre-ordered for a while. Unfortunately, I recently came to the decision to cancel it because the price tag just won't budge from its $50 list price. It will go on my wish list and I'll monitor it for a while to see if it goes down before I get it. Hopefully that happens.

Two from The Duke for me.

Hey guys, I just watched Antebellum last night, my review will be posted tonight. Don't sleep on this one, it's one of the most original films I have seen in years, the video quality is top notch, and the extras are insightful. It's going to get at least a recommended, if not highly recommended from me. And if there is an Oscars this year if Monae is not nominated I will be shocked.

My review is now posted too. And I’m genuinely surprised at how many critics panned it. Go in blind and I believe you will enjoy it! Don’t watch the trailer!

I picked up the UHD V For Vendetta from Best Buy today. I will watch on Thursday (November 5th)