I just realized I missed marking my 20th anniversary on the forum this past October! Where DOES the time go?

So thank you for all your support over all these years…along with all the “likes”, all the corrections and all the friendship. And thanks for sticking around and checking in each week! Now let’s start year #19.

Thank you, Mike, for all the service you have done for us and continue to do for us week after week. Happy New Year to you and the rest of the HTF membership.

I'll be picking up the new Dune: Part One this week. It is Part One on screen, even though they didn't include that subtitle on any of the packaging.

Ideally speaking, I would like to get the steelbook, which is a Best Buy exclusive, but it isn't currently available for pre-order. The last time I was able to pre-order a steelbook for store pickup was Raya and the Last Dragon, which came out back n May 2021. With Dune, it was only available for pre-order for a very brief time and only for shipping. So I'm just going to have to see if copies come in at my local store or not. You would think they would make it easier to reserve these things in advance. Anyway, i I don't manage to get one, I'll get the regular version from Amazon instead. I'm not interested in giving Best Buy my business on this title unless I can get the steelbook.

There is also a Wal-Mart exclusive which comes with a recreation of the pain box from the film. I'm not sure why the forum is turning the Wal-Mart link into a text phrase, but here it is for anybody who wants to look at that edition.

The Target one that you mentioned in the Roundup looks to me as if it might be a digipack. I assume the regular release is a keepcase. 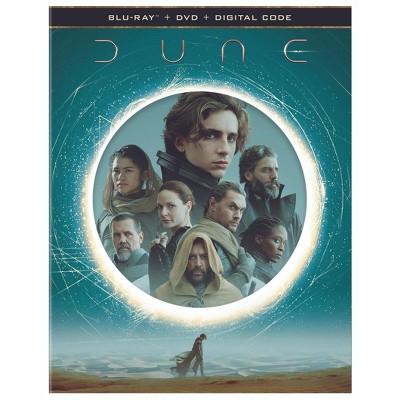 At least from what I am seeing, the Wal-Mart and Target exclusives look to be available only with the Blu-ray+DVD version of the film. So if anyone wants the 4K disc, those exclusives don't seem to be for you.

As is typical, the steelbook appears to be the 4K+standard Blu-ray edition only without a DVD.

I really enjoyed Dune, but now that I know Part Two is going to get made, I'm going to hold off and wait for the inevitable bundle release of both parts. Hopefully physical media will still be a thing by then.

I don't express it every week, but I certainly appreciate all of your hard work with the RoundUp every week. There's never a week that I don't look through the list.

Adam Lenhardt said:
I really enjoyed Dune, but now that I know Part Two is going to get made, I'm going to hold off and wait for the inevitable bundle release of both parts. Hopefully physical media will still be a thing by then.
Click to expand...

I've surprised how many people have said this. I even have a friend who is a big fan of the book and refused to watch the first film at all. He wants to wait and see both parts back-to-back for the first time. I had no experience with Dune at all before I went to see the movie, and I have no idea where it goes from here. I would have appreciated, perhaps, a little more of an endpoint on the movie rather than the abrupt ending that we got. But I enjoyed the film so much that I'm really glad I went to see it in the theater even if there is a long wait until we get the next one.

If both movies were shot at the same time and the two parts were separated by a few months, I would probably wait to buy the set too. But the next film isn't scheduled until October 2023 and I'm not that patient. I know I will enjoy revisiting the film enough in the meantime to make it worth buying now. I'm not really much for delayed gratification.
Last edited: Jan 8, 2022

I'll pick up Halloween Kills this week. I may get Dune but obviously, there will be a great sale on that at some point between now and when the next one comes out.

Some good releases this week. I hope to review Gambit some time this month.

@Mike Frezon - Just posted my review of Dune in 4K!

And the link has been added to the grid, @Todd Erwin !

I have been hovering over Best Buy's website constantly over the last couple of days waiting to see when the Dune steelbook would go from "Coming Soon" to active for ordering.

This finally happened a few hours ago...but only for shipping. They did not offer store pickup options at all. I like to get them in-store in order to inspect the case before I accept it in case of damage, and because store pickup allows me to save the shipping fees. But I really want the steelbook (I don't like the artwork on the regular editions), so I swallowed hard and bought it. I hope (fingers crossed) it arrives without damage.

Since I completed my order, the status of additional copies has changed again. It isn't "coming soon," and it isn't available now either. It is "sold out" altogether, within only a few hours. Either WB didn't manufacture enough steelbooks to meet demand or this is an incredibly highly sought-after title, or both. I was hoping this post would alert some of you to its availability, but it has disappeared really fast.

For anyone who is interested in the Wal-Mart exclusive Pain Box edition, here's a YouTube video that I found (not mine) showing what is included. It looks like it is just cardboard around the regular Blu-ray edition.

As of yet, I haven't seen anyone upload a look at the Target edition. As Mike noted in the Roundup, the Target website is not specific about what their exclusive entails, so we'll have to wait for somebody to buy it in order to see what comes with it.

We do know that neither the Wal-Mart exclusive nor the Target one comes with the 4K version of the disc.

There are some YouTube unboxing videos showing what you get with the Target exclusive version of Dune. It contains the regular Blu-ray in the standard keepcase in addition to some character cards. This isn't my video, but it shows you what you get. I sometimes like looking at these in order to look at other editions. Based on this, I think I made the best choice for me with the steelbook.

The Walmart pain box edition also looks like cardboard and has the regular Blu-ray case with it.

While I was looking to see what was in the Target edition, I also found this video from a guy who got an empty steelbook with no discs.

Hopefully this problem does not affect a whole bunch of copies. That would be a very big issue if they've got a batch of steelbooks arriving without the actual discs. I placed my order late last night when Best Buy began accepting orders again, so it won't actually arrive for another week. Here's another YouTuber who did get a copy with discs, so it's definitely not an issue with all copies. But there are multiple complaints about it on the Best Buy product page.

TravisR said:
I may get Dune but obviously, there will be a great sale on that at some point between now and when the next one comes out.
Click to expand...

And so I did buy it because I have no patience. On the plus side, I can feel by the weight that mine isn't empty.

Well, I got lucky. My copy of the Dune steelbook came today from Best Buy. It was well-packaged including packing material and in good condition and it had the discs in there. This is a great looking steelbook and I'm sorry that more people weren't able to get ahold of one.
You must log in or register to reply here.