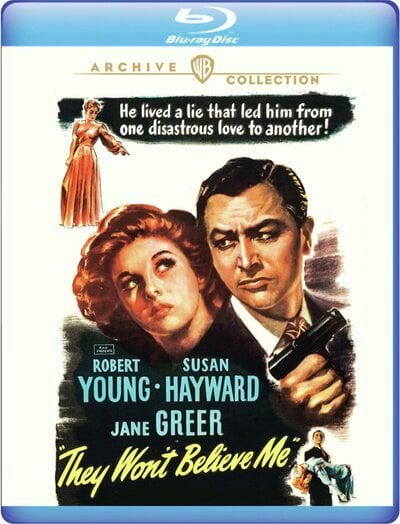 Robert Young stars in They Won’t Believe Me, an absorbing film noir melodrama. The original RKO publicity tells the story: “When a man goes to the devil he usually takes a woman with him...this man took THREE!” Young plays a dirty rotten scoundrel who sponges off his wealthy wife (Rita Johnson), seduces and abandons another woman (Jane Greer) and runs off with a third (Susan Hayward). Returning home, Young plots to murder his wife and get away with her money, but a series of ironic plot twists leaves him battling for his life. The role of faithless cad was a startling change of pace for Young, and he pulls it off brilliantly. Irving Pichel directed Jonathan Latimer’s uncompromising script.

No hesitation on this BD purchase.

Never saw this one but I love almost all of the noir's that the WA has released, so this seems like a safe bet.

Really looking forward to owning this film after seeing the recently posted clips.

If it looks like another 1947 RKO release "Crossfire" on BD, I'll be extremely happy.

Robert Crawford said:
If it looks like another 1947 RKO release "Crossfire" on BD, I'll be extremely happy.
Click to expand...

I'll be happy if it looks like this publicity shot: I haven't seen this film for a long time and I'm impatient for Warner's Blu-ray disc to arrive!

This is great. I’ve wanted to see this but it hasn’t been available in the US

Good film, will be interesting to see the extra few minutes (mine runs at 1.19). Jane Greer on blu ray is a purchase from me.

I've only seen the truncated reissue version, so this will be a major revelation.
R

Per Eddie Muller’s Twitter page, TCM will be premiering the restoration during this year’s Classic Film Festival.

I just added the Amazon Link that hasn't gone live yet to our Pre-Order Listing for a May 11th release date.

As part of the TCM Virtual Festival TCM will be showing the 4K Restoration.

THEY WON’T BELIEVE ME
19471HR 35MTV-PG
World premiere of a recent 4K restoration from the nitrate film. This restoration returns the film to its original 95 minutes thanks to the return of 15 minutes of original footage cut by RKO at the film’s reissue in the 1950s. A philandering playboy with a wealthy wife and two girlfriends ends up on trial for murder when two of the ladies turn up dead, and he’s the most likely suspect.
You must log in or register to reply here.