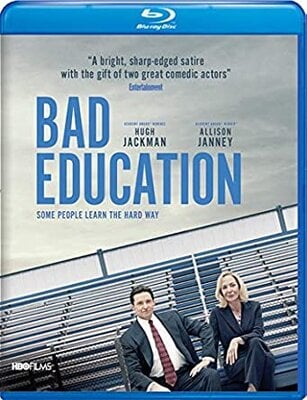 Blu-rayTM Available via Warner Archive Collection​
BURBANK, CA (July 22, 2020) –The fascinating true story of one of the largest public-school embezzlement scandals in America, is chronicled in Bad Education. This compelling original film from HBO will be released on DVD by Warner Bros. Home Entertainment on September 8, 2020. Now fans have the opportunity to own this powerful film on DVD, including bonus content, which will retail for $19.98 SRP ($24.98 Canada). Bad Education is also available to own on Digital via purchase from digital retailers.

Additionally, Bad Education will be available on Blu-rayTM courtesy of Warner Archive Collection. The Blu-ray release includes all the bonus features on the DVD and is also arriving September 8, 2020. Warner Archive Blu-ray™ releases are found at wb.com/warnerarchive and your favorite online retailer.

Inspired by the true story that rocked the town of Roslyn, NY in 2004 and garnered attention nationwide, Bad Education centers on the stunning impact and aftermath of a multi-million dollar embezzlement scheme. The darkly comical film highlights the deficiencies of the public education system in the U.S. while examining the broader forces that foster greed, corruption and lack of accountability in our institutions.

Bad Education follows Frank Tassone (Jackman) and Pam Gluckin (Janney), who reign over a popular Long Island school district on the verge of the nation’s top spot, spurring record college admissions and soaring property values. Between them, they racked up over $11.2 million dollars in extravagant personal expenses.

“Bad Education is a fascinating tale of greed and corruption that’s superbly written and directed, with stellar performances by Hugh Jackman and Allison Janney,” said Rosemary Markson, WBHE Senior Vice President, TV Marketing. She added, “It’s a truly exceptional film that has resonated with critics and viewers, and we are delighted to make it available to own on Digital, DVD and Blu-ray. Fans won’t want to miss the opportunity to add this outstanding film to their home entertainment collections.”

Digital
​
Bad Education is currently available to own on Digital and will be available to rent on Digital on July 6, 2020. Digital ownership allows consumers to instantly stream and download all episodes to watch anywhere and anytime on their favorite devices. Digital is available from various retailers including Apple TV, Amazon Video, Google Play, Vudu, PlayStation, Xbox and others.

Is this the first such new (non-catalog) BD release straight to Warner Archive?

Granted, it never had a wide theatrical release, and HBO probably never intended that even w/out this pandemic...

ManW_TheUncool said:
Is this the first such new (non-catalog) BD release straight to Warner Archive?

Granted, it never had a wide theatrical release, and HBO probably never intended that even w/out this pandemic...

No, it’s been standard practice for some time for Warner Archive to handle the BD release of made-for-TV content that the main branch of the company handles the DVDs for. That’s just a reflection on the sales disparity between how many copies a thing will sell on DVD vs on BD.

WAC continuing its string of titles that nobody , or hardly anyone requested.

I'll probably just buy the iTunes digital whenever it eventually gets down to $5... unless I end up catching it next time I re-up my subscription of HBO Now/Max (and don't like it enough).

TheSteig said:
WAC continuing its string of titles that nobody , or hardly anyone requested.
Click to expand...

I didn't, at least.
You must log in or register to reply here.

Thursday at 4:25 AM
Ronald Epstein