don't think that I have seen either of these uplifting films mentioned yet, but they would be welcomed.

Does Warner Bros even own the Goldwyn library?

I only noticed one mention of this film, tucked away among other titles, and feel it has been sadly overlooked...a great comedy-adventure: Right up there with Woman Of The Year as their 2 best ones together.

Dick said:
Does Warner Bros even own the Goldwyn library?
Click to expand...


and that's why some of us have wondered why certain films got a DVD release, when a beautiful blu could have been released, but when you have so very, very much to choose from WB/RKO/MGM/Monogram/Allied Artist/Goldwyn , it's hard to decide. Anyone would think you're a John Wayne fan!

Robin9 said:
Anyone would think you're a John Wayne fan!
Click to expand...

I'll repete three 1943 titles from earlier in the thread:

I just hope we get some more war movies.

I just hope we get some more war movies.
Click to expand...

I would die a happy man if WA would release the following on Blu-ray:

If the original three-strip Technicolor negative survives I'd also like to see the surreal musical from 1945 called Yolanda and the Thief. Great write-up, Beckford. A ton of fascinating insights to chew on. It always did seem amazing in that time at just how reflective the world of entertainment had become towards itself and its origins, seemingly compelled by both nostalgia and a sense of finally imbuing an aura of historic respect and 'legitimacy' that it didn't exactly maintain in its early days. The only clunker note indeed being the dogged embrace of minstrel fare, which the old show-biz stalwarts still included in their romantic canopy despite modern 1940s audiences having pretty much moved on. These musical period-pieces and biopics usually pull me in competing directions. I have an innate nostalgia gene and seem to vicariously groove on it, but the cliched storytelling and the glossy artificiality of the eras they purport to evoke invariably undermines things for me.

I've always found that early era of entertainment intriguing, with its more grassroots, more organic ties. That mix of small touring companies, nickelodeons, vaudeville, 10-20-30 melodramas, riverboat jazz bands, regional opera houses, Chautauqua, medicine shows, and even early Tin Pan Alley stuff. Although a hard-scrabble backdrop, the 'bottom-up' connection the entertainment world had to the culture at large always interested me more than the 'top-down' transition ultimately created by mass media. In fact, any interest I have in the stage/theatrical milieu tends to drop like a rock in the postwar years. Hit a similar brick wall with musicals not too long after the Universal mixture of Ryan/O'Connor teen-fests with the Jivin' Jacks and Jills, or Ann Miller's tapping in Paramount's "Priorities on Parade" as Jerry Colonna is croaking out the immortal tune "Cooperate with Your Air-Raid Warden."

Hard to pick a winner there - though It might be nice to picture that Oscar under little Natalie’s Christmas tree. And to imagine the other four raising an egg nog toast to her. But you can bet if Esther Howard’s Mrs. Kraft had anything to say about it, that libation would be heavily and heartily spiked.
Last edited: Jan 16, 2022

Depending on the quality of the film elements, I believe Born to Kill would be a very strong candidate for Blu-ray treatment. Excellent movie! It's probably been mentioned here before, but I'd like to see a properly restored version of John Huston's Moby Dick 1956. 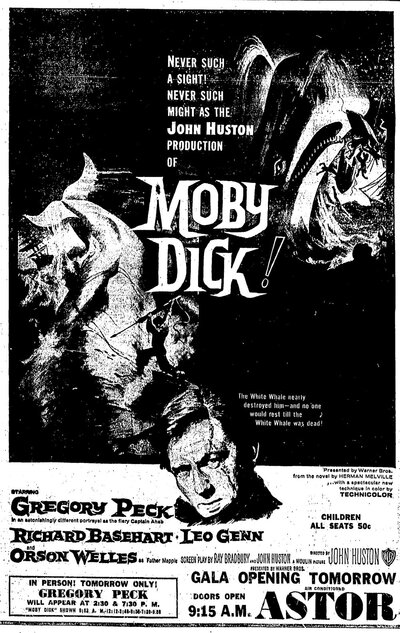 Blu-ray Review A Few Words About A few words about...™ Stage Fright -- in Blu-ray