During the earlier years of the Academy Awards when the group finally began recognizing the year’s best animated short subject, Walt Disney’s studio won the first eight Oscars in a row, being recognized for such classics as The Three Little Pigs, The Old Mill, and The Ugly Duckling. During the 21st century, Disney has once again begun to concentrate on animated shorts producing them to accompany the studio’s animated feature films and having such success that in the last fifteen years, the Disney shorts (not to be confused with the Pixar shorts which are another branch of the company) have collected five Academy Award nominations and two Oscars for their achievements. In this set of new millennial short films, a dozen superb efforts from the studio are offered in pristine high definition introduced by members of each film’s creative team and offering a wonderful cross section of material on the cutting edge of animation that we are all currently lucky enough to be able to watch and savor. 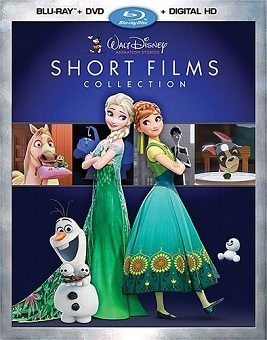 The amazing variety of the types of animation available to filmmakers (in the case of these films: traditional line work, CG animation, combinations of the two or the use of one type to mimic the other) are on full display beginning with 2000’s traditionally animated legend of John Henry (though it does quite often used stylized backgrounds rather than traditional drawings), the touching story of The Ballad of Nessie (2011) with a score by Oscar-winner Michael Giacchino telling the story of the origin of the Loch Ness monster through to 2015’s Frozen Fever, a follow-up to the studio’s most successful feature animated film Frozen as an under-the-weather Elsa (who sneezes snowmen) tries to give sister Anna a wonderful birthday party. Coincidentally, all three of these shorts rely heavily on song motifs with the Oscar-winning song writing team of Robert and Kristen Lopez providing the tune “Making Today a Perfect Day” for the latter film.

Another similarity that several of these shorts share is their lack of dialogue making background music scores of primary importance to the filmmakers to set the tone and mood of the piece correctly. The tragic tale of The Little Matchgirl (2006) uses the poignant music of Alexander Borodin to aid in weaving the classic story while more modern pieces are used as deliriously effective background music to accompany the lyrical tales of Lorenzo (2004), a cat whose enchanted tale takes over his body, 2010’s Tick Tock Tale where an outcast clock helps save a clock store from a vicious burglar, and the Oscar-winning Paperman (2012) and Feast (2014), both tales so delicately wrought and tremendously effective that they must be seen to be truly appreciated.

And then there are the slapstick comedies, and there are several of them represented here: How to Hook Up Your Home Theater (2007) which will bring many a smile to the lips of any home theater enthusiast and which continues the long line of Goofy “How-To” shorts, Prep & Landing: Operation Secret Santa (2010), a short subject continuation of the very popular holiday television special, Tangled Ever After, a wedding follow-up to the most successful 2010 feature film, and the dazzling Get a Horse! which masquerades as a vintage Mickey Mouse short but which comes bursting into 21st century life midway through the adventure.

If there is one complaint about these films, it’s that several of them were produced in 3D, but they are only offered in 2D here. In the case of Get a Horse! there has been no 3D release for this short in this region (it accompanied Frozen in theaters and on Blu-ray disc which wasn’t released in 3D in Region A.) Once again, Disney has lost a prime opportunity to present prime 3D material to an audience craving such projects.

Here are the twelve shorts present in this Blu-ray package. Names following the titles refer to the members of the creative team who introduce their work before it screens:

Apart from a small amount of line twitter in John Henry (which could very well be part of the animation technique) and some very slight banding in Lorenzo, these transfers (some framed at 1.66:1 and others at 1.78:1 or 2.35:1, all in 1080p using the AVC codec) are dazzling to behold with expert sharpness, rich, eye-popping color (when they’re in color), and perfectly executed contrast.

The DTS-HD Master Audio 5.1 sound mixes which accompany the shorts are all quite wonderful with music in all of them weaving expertly through the front and rear channels and split atmospheric effects peerless where appropriate (lots of sound gags with How to Hook Up Your Home Theater and wonderful dexterity in the sound mix with Tick Tock Tale and Get a Horse!). Dialogue in those shorts which contain it has been superbly recorded and has been placed in the center channel.

Filmmakers’ Introductions: the brief intros to each short may be omitted by choosing the proper selection from the main menu. You may also choose to watch all the shorts at once or choose each of them separately.

@DisneyAnimation: A Short Story on Shorts (7:18, HD): hosted by T.J. Miller (who voiced Fred in Big Hero 6), Disney filmmakers Lauren MacMullan, Mike Gabriel, Kristina Reed, Stevie Wermers-Skelton, and Kevin Deters have a roundtable discussion on Disney’s recommitment to making animated shorts and the process by which each short is chosen to be produced.

With Pixar having previously released two volumes of their short subjects, the time was certainly ripe for the Disney Animation Studios’ arm of the company to have its own release of animated short subjects. It’s a dazzling collection spoiled only a bit due to a lack of providing 3D versions of the 3D shorts which were produced. Otherwise, highly recommended.


I have had this on pre-order since it was announced. The price was sky-high...but has now dropped to a most-palatable $19.99 on Amazon.


This is going to be a mighty fun watch! Glad to hear they did a great presentation.


Thanks for the review.

Yup, I've had mine on preorder for a while, too. These shorts are super easy to make time to watch compared to a feature length movie and the price is right.

Aren't Get a Horse and Feast in 2.35:1? Or have they been reframed for this release?

Mark-P said:
Aren't Get a Horse and Feast in 2.35:1? Or have they been reframed for this release?
Click to expand...

I believe they are. I just neglected to note it in the review. I'll fix.

No 3D? That was expected, wasn't it? No surprise to me.

Johnny Angell said:
No 3D? That was expected, wasn't it? No surprise to me.
Click to expand...

No, it wasn't announced or expected, but it should have been there nonetheless.


Was this short released on another Disney Blu-Ray? I can't remember the title of the movie it was released with??? I know it wasn't in 3D on the blu-ray release and it wasn't with "Tangled".

I wish they would release a 3D version of the Animated Short Films release.

I don't remember ever having seen Tangled Ever After until I watched this disc, but that doesn't mean I haven't. The press notes said it was presented in 2012 which was the year of Wreck-It Ralph, but that had Paperman with it.


Anybody else have a clue?

There's this about Tangled Ever After at wiki.


"It premiered in theaters on January 13, 2012, before the 3D theatrical re-release of Beauty and the Beast[2] and on Disney Channel followed by the premiere of The Princess and the Frog on March 23, 2012.[3] The short was later included as a bonus feature on the Diamond Edition of Cinderella.[4][5] The short is also available as a stand-alone download on iTunes."

Thanks so much , Mark.


Checking my review for Cinderella's Diamond Edition, I find that I have indeed seen it before and reviewed it as part of that release. That review is here.

Thank You for the "Tangled Ever After" information, I knew I had it but I thought it was on a later release. I did see it in 3D with "Beauty and the beast".

Might this collection, if released abroad, have the 3D shorts in 3D?....It would be great to have them in 3D and all together.

FYI - If you redeem the included digital copy via "Disney Movies Anywhere". There is a bonus additional short available to watch via the DMA app/site: "Runaway Brain".
You must log in or register to reply here.