Sometimes made-on-demand programs like Fox Cinema Archives allow a movie fan to discover a mystery or a western or a musical that is a hidden gem, relatively unknown to the general movie population and just waiting to be discovered. Maury Dexter's Walk Tall is sadly not one of those undiscovered gems. It’s a perfectly entertaining little second-tier western that runs just an hour but with the added benefit of Cinemascope and DeLuxe color. Fox has put its best foot forward with this release offering a lovely widescreen transfer with strong mono-era sound. 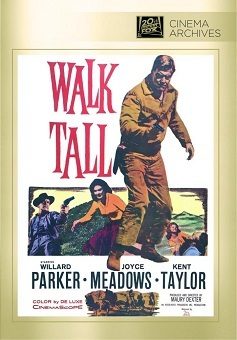 Disgraced ex-soldier Frank Carter (Kent Taylor) makes his money now as a bounty hunter massacring Indians for scalps that bring $40 apiece. After he and his three compatriots (Ron Soble, Bill Mims, Alberto Monte) attack a Shoshone reservation and kill numerous women, children, and old people, the Shoshones are on the warpath for having the peace treaty broken. Colonel Stanton (Russ Bender) sends his best officer Captain Ed Trask (Willard Parker) out of the jurisdiction to the Black Hills of Dakota to bring back Carter to face trial for the slaughter. He catches him easily enough, but getting him back to the fort before the Indians take matters into their own hands or Carter’s own band rescues him is going to prove to be a problem.

With only an hour’s running time in which to establish character and get the plot moving, the tight script by Joseph Fritz and the economical direction by Maury Dexter do rather masterful jobs in getting viewers fully immersed in the story in a brief amount of time. During the hazardous trek back to the fort with his prey, Trask must deal with a fiery runaway covered wagon attacked by Indians (which happens to contain a lovely female survivor - Joyce Meadows as Sally Medford who has her own grievances against the Shoshone) as well as a deadly rattlesnake and crafty adversaries slowly closing in on the captain and his quarry. Dexter might not use the Cinemascope frame very imaginatively, but the western landscapes do look immense and daunting to a man with two rather ornery people under his watch. The plotting loses some points for its abuse of dramatic license, however, after Dexter gets shot in the lower side, struggles for only a bit, and then completes the film with a minimum of discomfort and showing no signs of the wound’s hindering his ability to do his duty.

Willard Parker and Kent Taylor, two acting veterans with many years of filmmaking experience, have the movie pretty much to themselves for a goodly portion of the running time, and the cat-and-mouse switches between the two are entertaining and completely secure in their capable hands. Joyce Meadows gets only a few moments to establish her character’s personality in a rather underwritten, stereotypical role. Ron Soble as Carter’s second-in-command makes a firm impression with only a few words while Bill Mims as the female-crazy Jake likewise establishes his very familiar cowboy character without much effort. Russ Bender is a solid Colonel Stanton, and Felix Locher, while a trifle stiff as Chief Black Feather, certainly adds a most colorful presence once his multi-hued headdress enters the frame.

The film’s 2.35:1 Cinemascope theatrical aspect ratio is faithfully reproduced in this transfer that’s anamorphically enhanced for widescreen televisions. Apart from a few soft long shots, the transfer’s standard definition sharpness is excellent with details in tree bark and facial features easily seen when upconverted by a good quality Blu-ray player. Color is rich and rewarding throughout with realistic skin tones apart from a couple of shady sequences where skin tones appear chalkier in texture. There are only a few stray dust specks present and no age-related scratches or reel change cues on display. The movie has been divided into chapters every ten minutes, so this film contains 7 chapters.

The Dolby Digital 2.0 sound mix is decoded by Dolby Prologic into the center channel. Perhaps a bit too loud in its encode on this made-on-demand disc, a quick adjustment proves the sound to be typical mono for its era with strong dialogue recording and a secure mix with Richard D. Aurandt’s score and the atmospheric sound effects present. Perhaps the slightest bit of hiss in a quiet moment or two is the only anomaly in an otherwise first-rate lossy encode.

There are no bonus features for this made-on-demand disc.

Well, it sounds like a very routine film, but if the transfer is as good as this, I'llsupport Fox and buy the disc.
You must log in or register to reply here.