For a decade, Betty Grable ranked as one of the top box-office stars in the country and certainly Twentieth Century Fox's highest placing member of the movie star elite outdistancing other Fox stars like Tyrone Power, Clifton Webb, Linda Darnell, and Gene Tierney. The three films presented in this Fox Cinema Archive repackaging of top Betty Grable movies all helped the star place high on the Quigley list of top stars: 1950's Wabash Avenue (where Grable landed 4th on the list), 1948's That Lady in Ermine (2nd), and 1943's Sweet Rosie O'Grady (1st, her only time ranking as the top star in America). Fox hasn't exerted much effort to bring these three musical pleasures up to speed for the new millennium, but at least they're available for purchase for fans of the star. 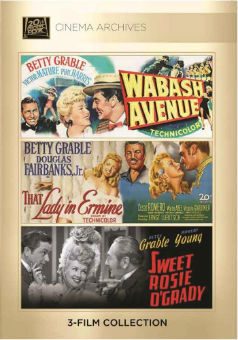 Former business partners Andy Clark (Victor Mature) and Mike Stanley (Phil Harris) are constantly double-crossing one another attempting to claim a piece of the other guy’s good fortune. Mike’s Loop Café in Chicago is doing fantastic business, and one of his prime assets is showgirl Ruby Summers (Betty Grable) who has a dynamite figure but makes poor choices in material with her rather gauche presentation skills. Andy tricks his way into another partnership with Mike and begins working on Ruby’s act turning her from a peroxided chippie into a chanteuse who can really sell a ballad. Along the way, the two fall in love making Mike regret ever bringing Andy into the business. But he has his own double-cross to thwart their marriage plans and to keep Ruby close to him even as she accepts an invitation to play on Broadway in Oscar Hammerstein’s new show.

With basically the same story used for the 1943 hit Coney Island, the success of this remake boils down to the quality of its new elements, and despite pleasing direction by Henry Koster, the other rudiments here don’t quite match the material in the earlier film. The songs and dances are somewhat weaker in the new score (new music provided by Mack Gordon and Josef Myrow producing the pretty “Baby, Won’t You Say You Love Me” and the baffling Oscar-nominated “Wilhemina”), and there is far less reliance on old standards (“I Wish I Could Shimmy” and “Harrigan” are really the only two oldies that stand out). Miss Grable is partnered in several numbers by the man who did the choreography for the film (this time it’s Billy Daniel), but her dancing takes on a bit of stiffness here that wasn’t evident seven years earlier. Her two leading men – Victor Mature and Phil Harris – aren’t patches on her earlier co-stars George Montgomery and Cesar Romero (Mature in particular incompetently mimes playing the piano, and both men engage in too much forced grinning) though there are a couple of pluses: this new movie boasts Margaret Hamilton as a feisty temperance league protestor who steals the show in her one major appearance and the sloppy drunk played here by James Barton (Charles Winninger in the original) who does a superb tap dance early in the movie that puts most of the rest of the film’s dancing to shame. Betty Grable was still queen of the Fox lot (though her star was fading; she had only one more year in the box-office top ten to come, and she’d soon be eclipsed by Marilyn Monroe), and while she could still pull off her brand of wholesome cheekiness as a showgirl, those years were ending, too. Neither Victor Mature nor Phil Harris sings a note in this musical (odd since Harris was famous as a singing bandleader at the time), and while they play their parts effectively enough, there’s not quite the spark or freshness that their 1943 counterparts demonstrated. Reginald Gardiner isn’t given much to do as Andy’s right-hand man Eddie, and he, too, doesn’t do any crooning.

In 1861, the Hungarian army led by dashing Colonel Teglash (Douglas Fairbanks Jr., singing voice by Ric Ricardi) invades the duchy of Bergamo whose men lay down their arms without firing a shot. Ruler Countess Angelina (Betty Grable) has just married Baron Mario (Cesar Romero) who rather than face possible execution hides in the countryside vowing to return to his beloved. Teglash notices a painting of Angelina’s kinswoman Countess Francesca (also Grable) who had faced a similar Hungarian invasion three centuries before and had killed her enemy thus thwarting the invasion. Little does he know that the painting is enchanted allowing Francesca to leave it at night to woo the sleeping colonel into treating his captives with kindness and understanding until Angelina and her subjects can defend their country themselves.

The movie holds strong reminders of the frothy, sophisticated romantic musicals Ernst Lubitsch made during the late 1920s and early 1930s though this film isn’t blessed with musical performers like Jeannette MacDonald and Maurice Chevalier who were expert at playing such frippery. Though Lubitsch is solely credited with the producing and directing chores of the movie, he actually died eight days into filming with the movie completed by Otto Preminger (who magnanimously took no screen credit). But it isn’t Preminger’s strong hand that thwarts the movie's working better than it does but rather the miscasting of its star whose all-American pluck and steadfastness don’t really work in such a lighter-than-air confection (script by Samson Raphaelson). The score by Leo Robin and Frederick Hollander contains some of the same chanted, rhymed dialogue than one might have found almost two decades previously in early sound musicals (“What a Crisis!”) along with solos for the star (the upbeat “Oooooh, What I’ll Do,” the slower “The Melody Must Be Right”) and one duet for the couple (the Oscar-nominated “This Is the Moment” which does allow co-star Douglas Fairbanks, Jr. a chance to shine in some ballroom steps with Grable, her only real dancing in the movie). Cesar Romero is relatively wasted as he pops in and out of the boudoir to check on his bride and eventually masquerades (rather unsuccessfully) as a gypsy, and once again Reginald Gardiner appears in a role far beneath his talent, but there is an amusing running gag with Walter Abel playing the Colonel’s second-in-command in both time periods of the story who always gets bellowed at to appear before his master.

When American-born entertainer Madeleine Marlowe (Betty Grable) who’s made a smashing success in London is exposed as a former beer garden entertainer named Rosie O’Grady by Police Gazette reporter Samuel A. Magee (Robert Young), Rosie vows to take her revenge. She concocts a phony engagement story between her and Magee for release to all of the other New York newspapers thus embarrassing him utterly. Though the two initially agree to call a truce to their feud, matters beyond their control continue to drive them to attempt to one-up each other in an on-going effort to bring the other down.

This is the type of colorful showgirl saga (set this time in the 1880s instead of the Gay Nineties) that brought huge wartime stardom to Betty Grable and was a genre she returned to continuously throughout her career even though she made concerted efforts to find other showcases (like That Lady in Ermine or The Shocking Miss Pilgrim) for her singing and dancing talents. The song and dance here is rather routine in nature though there is one lovely ballad by Harry Warren and Mack Gordon “My Heart Tells Me” (even though it’s typically overused in the movie – performed four times in a variety of situations) and a showy dance duet between Grable and choreographer Hermes Pan to “The Wishing Waltz.” But you’ll get very tired of the title number during its half dozen renditions during such a brief (76 minutes) movie. Reginald Gardiner is on hand once more, this time as a duke after Grable’s hand, and Robert Young sings better than one might expect in a couple of brief moments, doing especially well in a capella renditions of songs with Grable and Gardiner.

All three films are presented in their original 1.37:1 theatrical aspect ratio. Because Technicolor masters were discarded, Fox is working off Eastmancolor elements which simply don’t look anything like real Technicolor that must have been dazzling with these films in their original releases. Both Wabash Avenue and That Lady in Ermine have been color timed much too dark throwing the other colors (especially skin tones) way off from their original hues and leaving us with color that is heavily pasty and too saturated. Wabash is fairly dirty with plenty of specks and debris along with reel change markers, but That Lady in Ermine has obviously had some work done on it as it’s spotless in appearance with no reel cues. The timing is a bit too dark in Sweet Rosie O’Grady, too, though for some reason it comes closer to the look of Technicolor than the other two, and flesh tones are much truer with less brackish color on this one. It does have a few random dust specks but no reel change markers. Sharpness is excellent throughout all three of these films. Chapters have been placed every ten minutes so Wabash has 10 chapters, Ermine has 9, and Rosie has 8.

The Dolby Digital 2.0 sound mix provided for all three films is decoded by Dolby Prologic into the center channel. Once again, the volume level on each disc has been set uncomfortably high and will require some adjustment on the part of the user if he doesn’t wish to listen to a track riddled with distortion. There is some consistent light hiss to be heard in quieter moments of the films and occasional crackling distortion in the upper fidelity registers though Sweet Rosie O’Grady is the best of the three soundtracks. But dialogue, music, and sound effects have been mixed together well in all of them making for a pleasurable listening experience once adjustments have been made to your equipment.

There are no bonus materials on any of the discs in this set.

Betty Grable fans will likely be glad to have a chance to add these three discs to their collections even if the transfers don’t always do justice to the original films’ photography.

It's a shame.
You must log in or register to reply here.