Those who have fond memories of Richard Fleischer’s 1958 epic The Vikings will find much in common with the new History Channel hit series Vikings in its first season on the air. No, you won’t be getting that fantastic and stirring Mario Nascimbene score or the all-star cast wattage from the likes of Kirk Douglas, Tony Curtis, Janet Leigh, and Ernest Borgnine, but what you will get is some of the same kind of melodramatic storytelling (brothers pitted against one another, romantic entanglements) and scores of fight scenes showing the intense, unfettered ferociousness these people displayed when confronted by their enemies. 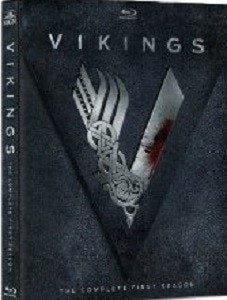 keep case with leaves in a box with plastic slipcover

The series begins in 793 A.D. when one Viking warrior Ragnar Lothbrok (Travis Fimmel) is tiring of continual raids to the east and longs to travel west to see what might be on the other side of their world. Tribal head Earl Haraldson (Gabriel Byrne) forbids Ragnar’s mission being excessively wary of his rival's thirst for knowledge beyond what they already know. Determined to set his own life’s course, Ragnar uses all of the money he has to enlist an expert ship builder Floki (Gustaf Skarsgård) to construct a worthy vessel for himself and a group of fellow Viking comrades including his warrior brother Rollo (Clive Standen). Outfitted with a primitive style of sundial compass, the Vikings land on the shores of England in Northumbria and raid a monastery plundering it for the gold relics, butchering many priests but bringing some back as slaves. One priest, Athelstan (George Blagden), had been a missionary and knows some Nordic, enough to impress Ragnar with his knowledge and piety (he resists the offer of a threesome) and trustworthy enough to use as someone who can tutor him in the Anglo-Saxon language and the customs of this strange land once they return for further exploration and plunder.The remaining eight episodes of the series map out the rise of Ragnar Lothbrok as he commands successful raids against the English confounding them with his knowledge of their language and behaviors and his ongoing rivalry with, first, his ruler Earl Haraldson and later on in serving as the right hand man to King Horik (Donal Logue). There are personal stories concerning his relationship with his warrior wife Lagertha (Katheryn Winnick) and his adolescent children (Nathan O'Toole, Ruby O'Leary), the rising resentment of his brother Rollo as his mighty efforts are continually downplayed in Ragnar’s favor, and the Norse gods which they faithfully serve. The actors are good ones with Travis Fimmel certainly charismatic enough to pull off the leading role and excellent work from Clive Standen as his brother, George Blagden as the priest struggling to adjust in a strange land, John Kavanagh as a creepy seer who does an accurate job of foretelling potential disaster, and Gustaf Skarsgård as the flaky Floki. The two primary women of the cast, Katheryn Winnick as Ragnar’s wife and Jessalyn Gilsig as the Earl’s wife are adequate in roles which are decidedly secondary to most of the series’ action (thus far). There is effort made to make Winnick’s Lagertha a fighter worthy of her male counterparts (she fights off two rapists in the pilot and later slays another with ease later on in the season), but her hair styles and dialogue readings reek a bit of Valley Girl (even though she’s actually a Canadian).Series creator Michael Hirst isn’t a slave to the actual history of the Vikings any more than he was to the true story of King Henry VIII during the four season run of The Tudors. There is enough history here to qualify the show as a candidate for the History Channel’s line-up, but the emphasis of the series is on typical melodramatic plotting (love affairs, jealousy, and broken allegiances) and the brutal way of life both in warfare and in sexual relations that the people are portraying. Cable’s laxer standards of what can be shown means there are vicious rapes and extended battle scenes with slashings and blood sprays galore (though, to be fair, it’s certainly more subdued than those present in Starz’s Spartacus series). There are also sequences of pagan rituals of human and animal sacrifice, a madcap funeral wake, and even a hallucinogenic episode after the priest consumes some squirrelly mushrooms.Here are the nine episodes contained on three discs in this first season Blu-ray set. The names in parentheses are the participants in that episode’s audio commentary:1 – Rites of Passage (creator Michael Hirst, co-star Jessalyn Gilsig)2 – Wrath of the Norsemen3 – Dispossessed4 – Trial5 – Raid6 – Burial of the Dead7 – A King’s Ransom8 – Sacrifice9 – All Change (co-stars Katheryn Winnick and Clive Standen)

The transfers are formatted in the widescreen television aspect ratio of 1.78:1 and are presented in 1080p using the AVC codec. Filmed in Ireland, the series has colors that have been slightly desaturated to give a colder, bleaker, and more aged look to the show. This timing is consistent over the show’s nine episodes though there is some adjustment when the Vikings go east to Sweden and other locales. Sharpness is excellent, enough to aid viewers in noticing the less than sterling effects work in some of the sea storm sequences. Black levels are acceptable but not the darkest they could have been. Subtitles when they’re used are in white and are very easy to read. Each episode has been divided into 12 chapters.

The DTS-HD Master Audio 5.1 sound mix offers excellent fidelity and sophisticated use of the surrounds for a cable action series. The music score by Trevor Morris gets the full treatment into the fronts and rears, and there are split effects through the soundstage that aid immeasurably in establishing wonderful ambiance. The LFE channel is also used to great effect during the battle scenes with the heavy blows and the thundering music. Dialogue is always easily discernible and has been placed in the center channel.

Audio Commentaries: neither of the commentaries (see above episode list for participants) goes deeply into production history and experiences. The Michael Hirst-Jessalyn Gilsig commentary is perhaps the better of the two as he does discuss some of the ideas behind the series’ conception and execution.Deleted Scenes (3:39, HD): four scenes total on discs one and threeExpanded Episodes (HD): every episode offers a longer (by a few minutes) cut than the televised version.Conquest and Discovery (HD): an interactive map which features the six primary locations for the action in season one. History professor Dr. Jochen Burgtorf offers information of each of the locales.The Armory of the Vikings (HD): an interactive gallery of eight pieces of equipment used by the Norsemen in the series. Again, Dr. Jochen Burgtorf discusses the ax, the sword, the shield, the dagger, the spear, armor, bow and arrow, and the ship.A Warrior Society (20:48, HD): creator Michael Hirst, actors Jessalyn Gilsig, Clive Standen, Katheryn Winnick, George Blagden, and Travis Fimmel talk the culture of the era and the way it’s incorporated into the series and their characters.Birth of Vikings (17:09, HD): creator Michael Hirst, the same stars mentioned above, historian Justin Pollard, director Johan Renck, production designer Tom Conroy, and others present a behind-the-scenes look at the creation of the series.Forging the Viking Army (12:11, HD): sword master Richard Ryan and stunt coordinator Mark Henson discuss the individual training for stars Travis Fimmel, Katheryn Winnick, and Clive Standen and also talk about the fight choreography they utilized for the battle scenes in the series.Promo Trailers (HD): Paranoia, The Family, The Wolverine, The East.

Vikings is a fairly routine action-adventure series that was an unexpected hit on the History Channel earlier this year and one that has been renewed for a second season (a good thing since the last episode was loaded with cliffhangers). Superb video and audio transfers support a series that many will find appealing.