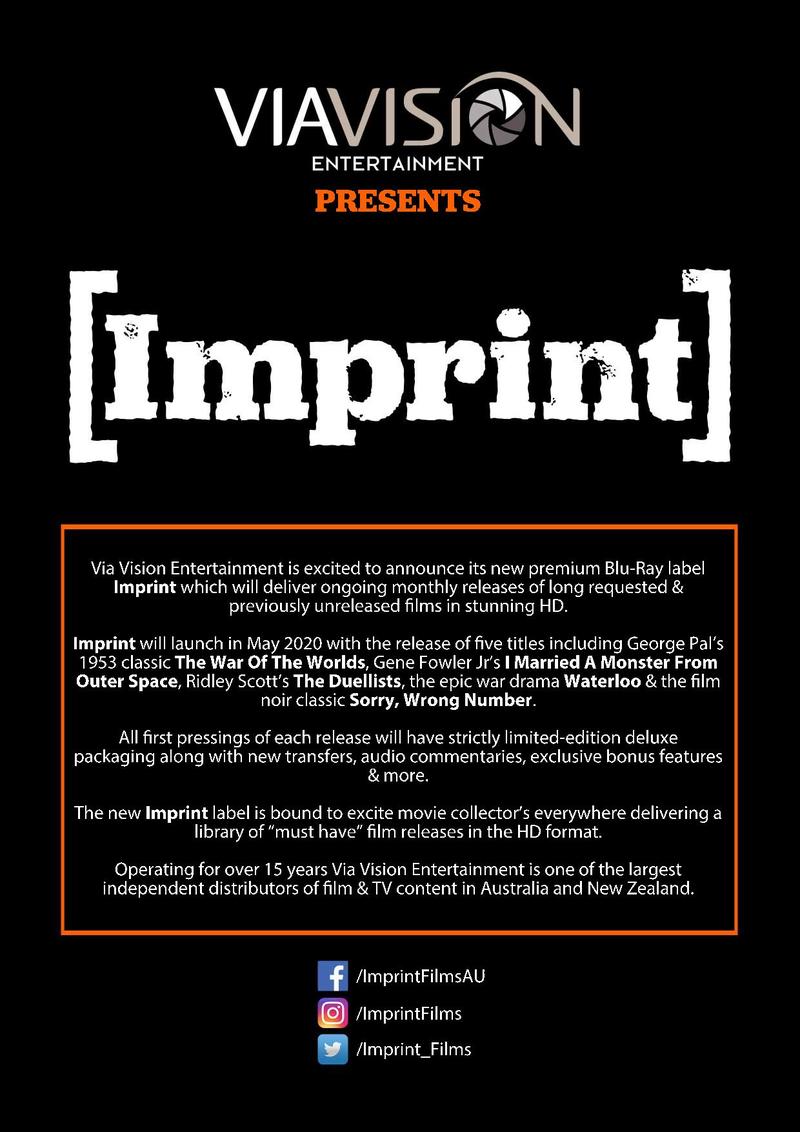 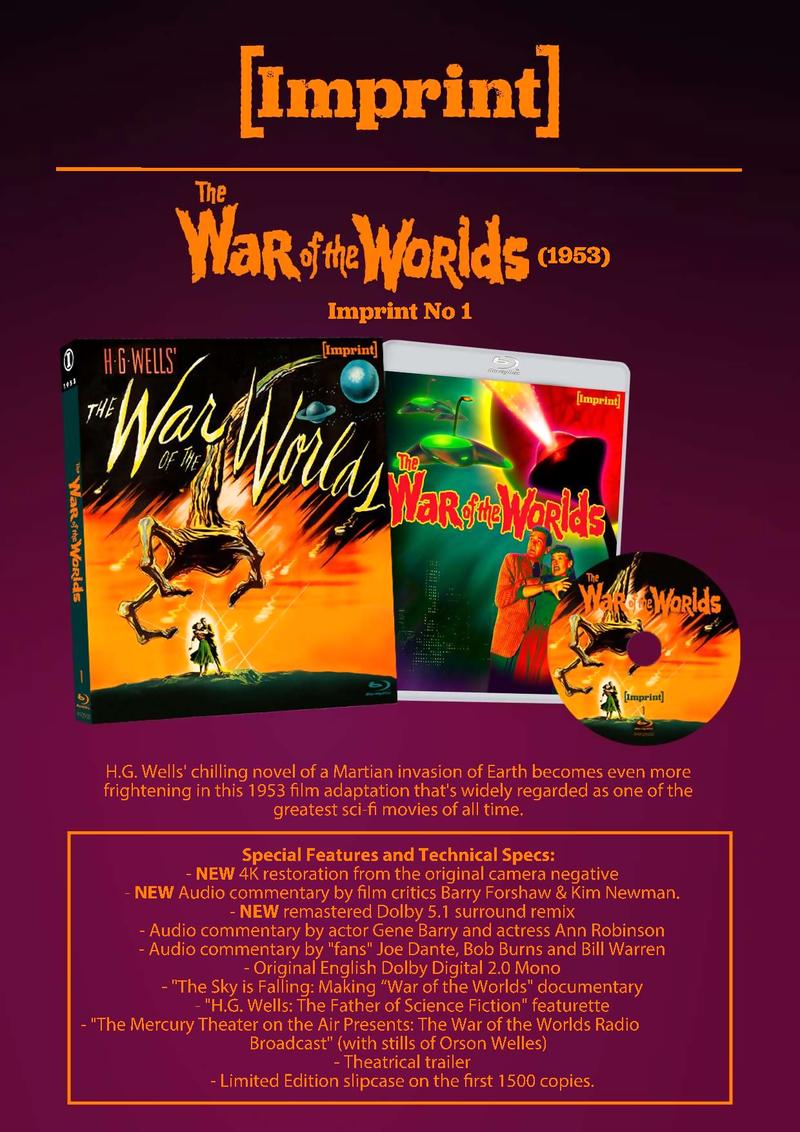 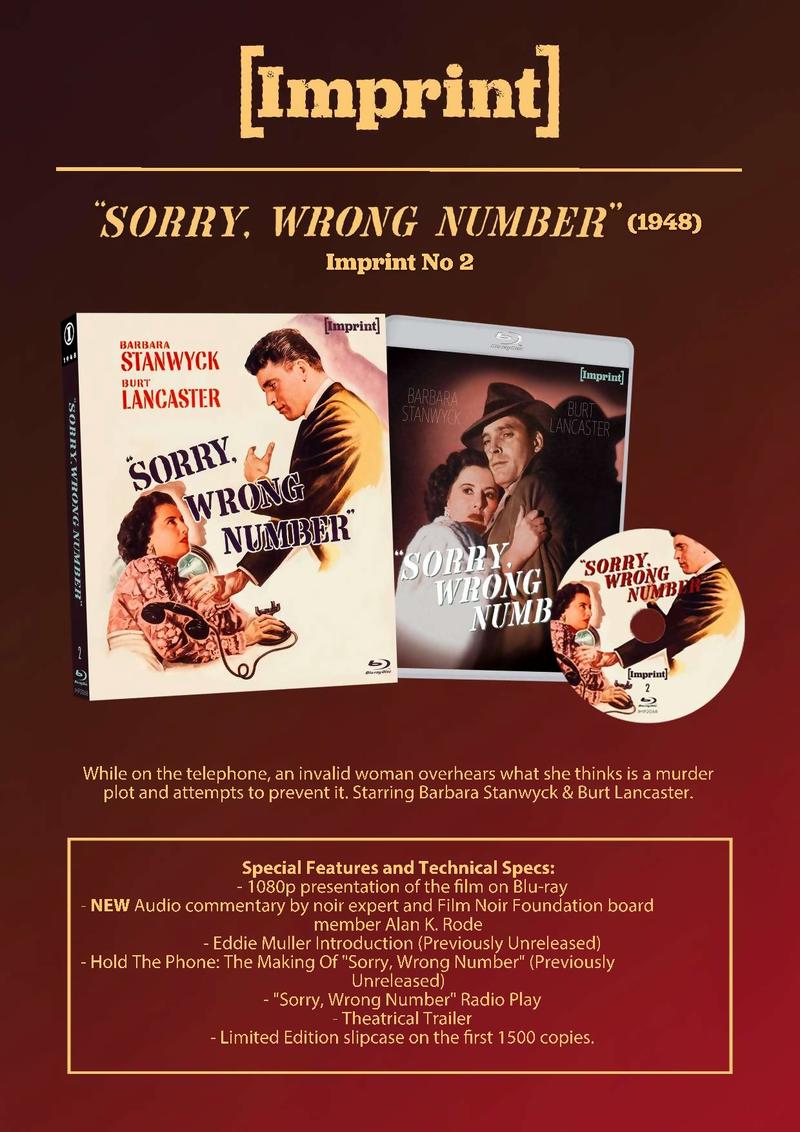 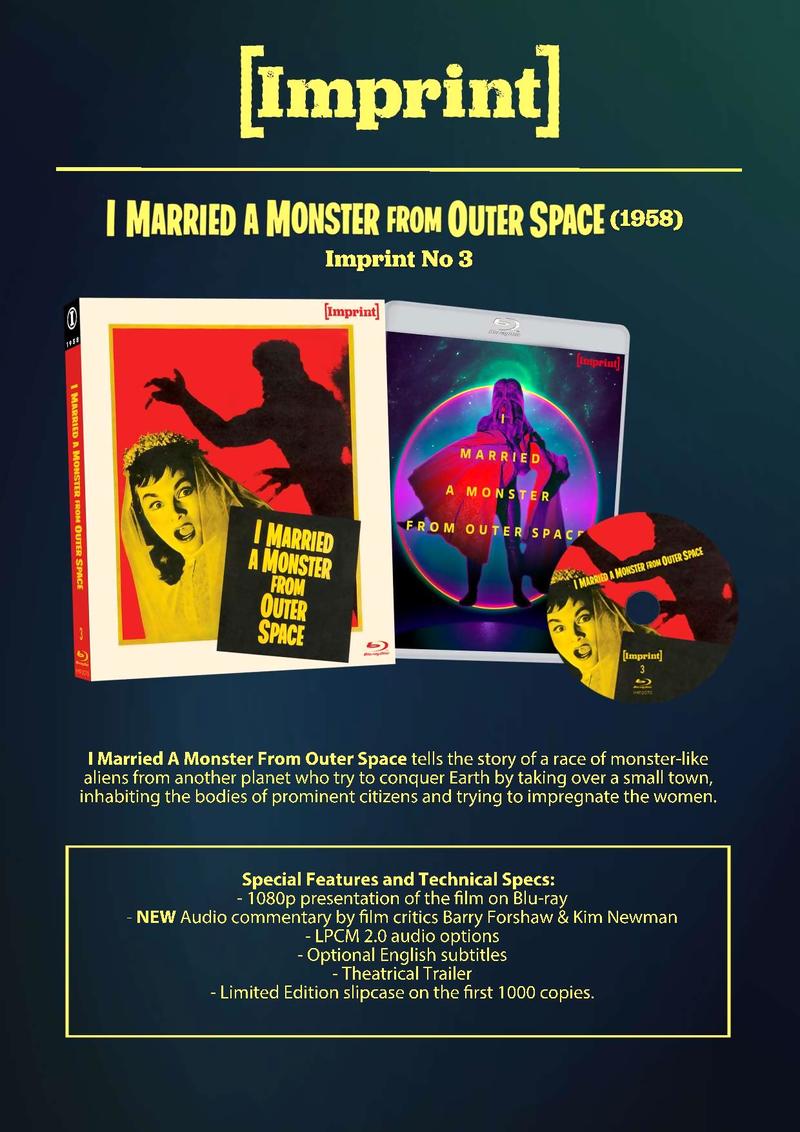 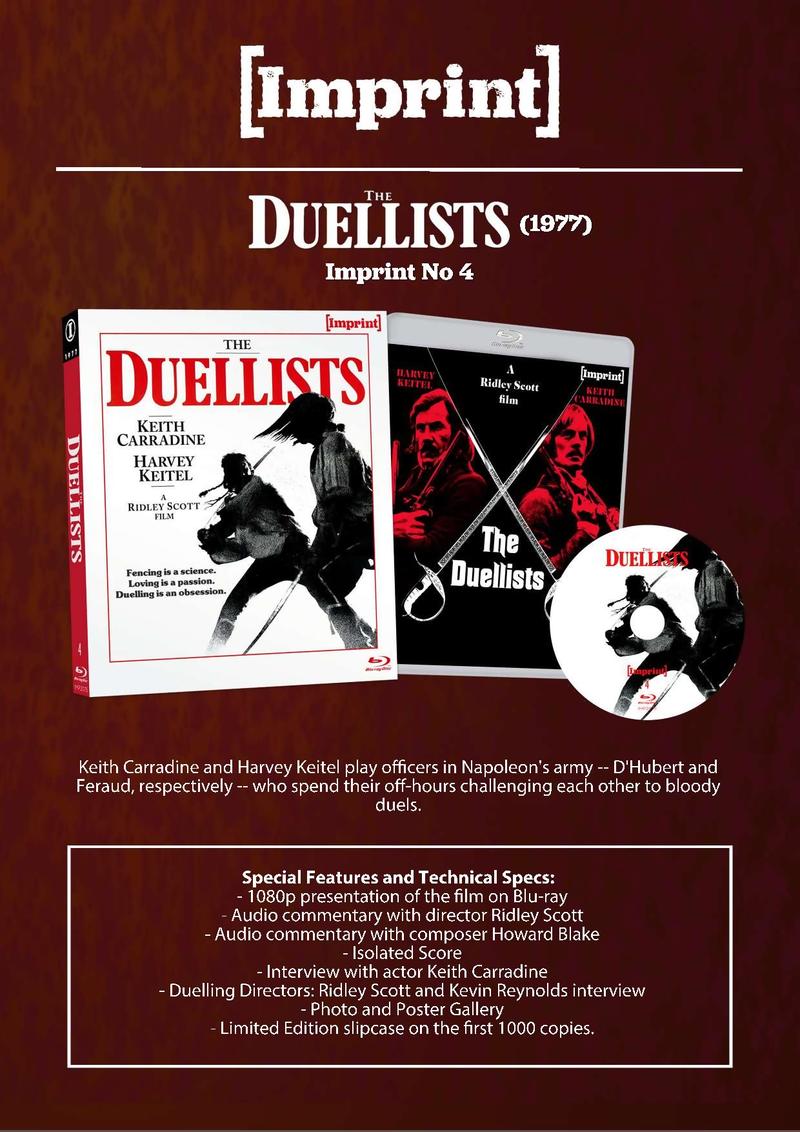 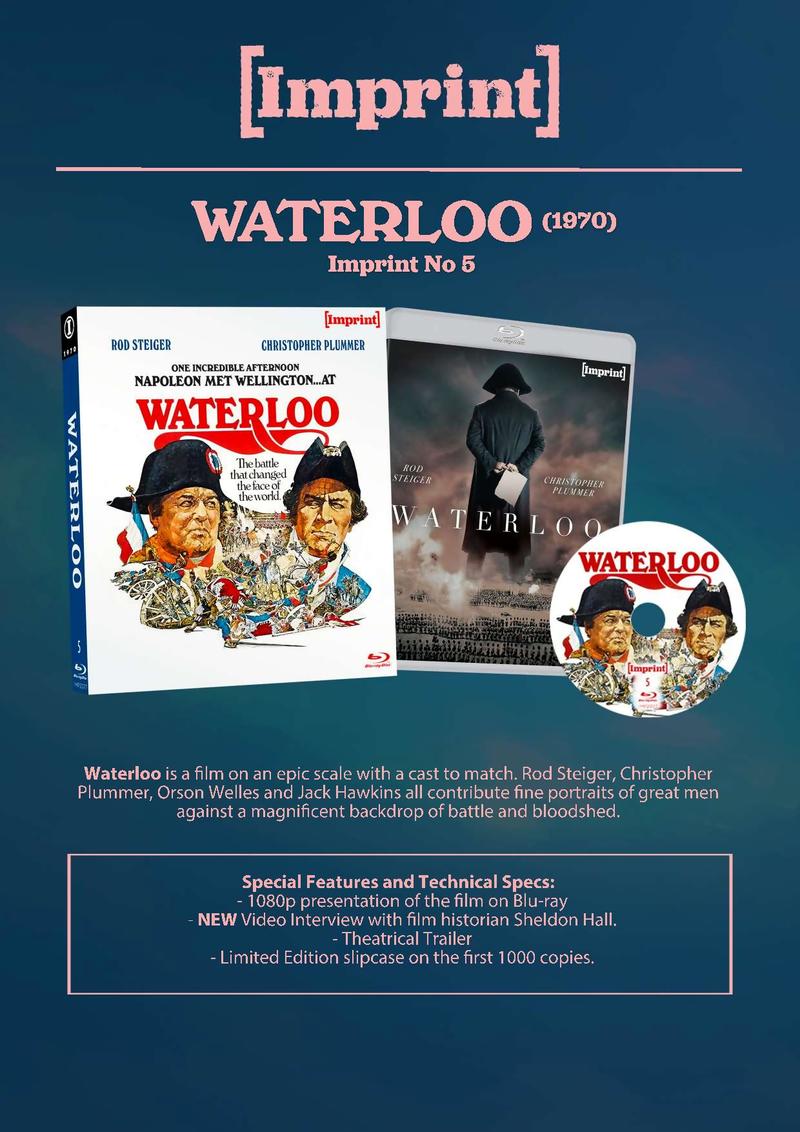 Excellent news that Paramount is opening up its vaults! But is it exclusive to Australia (where the company is based) or will these titles be readily available in R1? With the (unofficial) demise of Twilight Time, it looks like Imprint will pick up the slack. No word on an MSRP yet. Hopefully other requested Paramount titles will follow: Murder On The Orient Express, Ordinary People, The Court Jester etc.

Yup, nice to read a bit of good news in this tired old world.

As an Aussie This is good news

I have a few via vision titles

hope they aim for the fences with their encoding this time

Very excited for this new line. Waterloo and The Duellists from this first batch for me.

An impressive debut for the line with a little something for everyone. I hope they will be available here without too much bother.

Received an email from someone named Grant Taylor at ViaVision who has assured me all imprint titles will play in 'Canadian' Blu-ray players. I'm from Canada, so I have no doubt if they play here, they'll play on U.S. blu-ray players too. One thing everyone should be made aware of. If you pre-order these titles from ViaVision your credit card will be charged immediately, even though the titles do not ship until May. However, if you want these with their collective slipcovers, then I suppose its' time to suck it up and pony up for these great Paramount releases. Finally, ViaVision is offering a bundle pack, to include all 5 titles for a minor discount price. It's definitely the way to go if you're planning on collecting all of these eventually. Save a few bucks. One other word of caution - shipping rates to the US are $20 but to Canada, $60!!! Judge and buy accordingly.

One other thing to consider. Having bought a considerable amount of ViaVision stuff on both DVD and Blu-ray in the past, I can vouch for the fact that their region encode - at least on all those titles - was region free. And let's not forget that when Paramount has made titles like Zulu and The Italian Job available in the U.K. these too were region free offerings. So, I cannot see them pulling the chicken switch on these with a region lock. But again, we'll have to wait and see. Blu-ray.com presently has them listed as region B only releases. Personally, I'm more willing to take the word of someone who contacted me directly from the company than an autonomous third-party website. But again, wait and see.

As Nick noted, they charge your credit card immediately upon placing your order even if those titles are shipping out until late May.

Ill wait. 35.00 a pop, as much as I love the films, that's a bit steep, plus Shout Factory has a deal with Paramount so they actually might have the same films. I feel it is entirely possible!

TheSteig said:
Ill wait. 35.00 a pop, as much as I love the films, that's a bit steep, plus Shout Factory has a deal with Paramount so they actually might have the same films. I feel it is entirely possible!
Click to expand...

I think some if not all of these titles will be released in the States before this year is done.

Not trying to drum up business for Via Vision, but just so members make an informed choice about any purchase from Down Under, please take the exchange rate into consideration.

I'd recommend getting Australian discs from JB Hi-Fi - they're shipping rates are much more reasonable.

I want to be very careful saying this...

I have heard some "rumblings" about decisions being made about Paramount catalog product this Summer.

Some titles *could* make their way to Blu but I am guessing more digital.

Again, take this with caution. I got it from a good source but nothing has been decided yet.
C

Robert Crawford said:
I think some if not all of these titles will be released in the States before this year is done.
Click to expand...

I am sure you are correct and have you noticed only 1 of the 5 has any mention of English sub-titles which are important for many people. Via Vision have a bad record of including sub-titles on BD releases.

Nick*Z said:
One other word of caution - shipping rates to the US are $20 but to Canada, $60!!! Judge and buy accordingly.

I just tried a Bundle of 5 to US and I'm getting $45 estimated which is the same shipping cost I'm seeing using my Inlaw's New Brunswick address/Post Code. (Single item $20 shipping to US or Canada)

I'm not sure is shipping charges are in flux on the website or if I'm looking at a different location or I'm misunderstanding something (I haven't gone past the estimate screen either).

I saw a German complain about $60 shipping, but when I try a UK or German Postal Code I'm also seeing $45AUD shipping for a Bundle
Last edited: Feb 27, 2020

Has anyone seen Waterloo? Did like War and Peace so how is this one by the same director?

If you liked War and Peace, you'll probably like Waterloo. It's a little less arty and a little more "big, historical epic," but it's a good film.

Yes, I have the German Blu-ray and prior to that had the Russian DVD. I'm a fan of Waterloo which is basically a film in two halves. The first half covering Napoleon's fall and first exile, his return and the build-up to the battle of Waterloo. The second half is an absolutely glorious recreation of the battle of Waterloo. Shot with hundreds of extras on location in such a way we will never see again. It does a fantastic job of showing us the battle, the tactics, and how Napoleon and his army first won and then lost the battle. If you have any interest in this period of history or Napoleon and this battle...it is a must own.

I think Steiger makes an excellent Napoleon and the cast is mostly wonderful. The film flopped when it was released with tastes at the time having moved away from these historical epics. It's failure frightened the money people on Kubrick's Napoleon film causing them to pull out and leaving Kubrick highly paranoid about future projects with concerns that if somebody beat him to the cinema with a picture based on a similar topic it could wipe out his project. He would later drop work on his Holocaust film because Spielberg beat him to the punch with Schindler's List.

The Smithsonian Channel has a great documentary "Napoleon's Waterloo" which went into detail why he lost the battle and it was shown on tv recently. Like history and epic films like War and Peace & Abel Gance's Napoleon so I might buy this new release.
You must log in or register to reply here.

International A PLACE IN THE SUN coming to Blu-ray from Imprint Films!
3 4 5 Tags blu-ray