Vengeance Is Mine Blu-ray Review

The story of a charming, murderous psychopath told in flashback forms the plot of Shohei Imamura’s Vengeance Is Mine. It’s a long film with a half dozen fascinating characters, but screenwriter Masaru Baba and director Imamura haven’t provided us with much insight into the killer’s psyche. Rather, one’s enjoyment of the film will pivot not on any psychological observations into a diseased mind but rather on how easily and successfully this smiling cobra strikes at will at so many unassuming victims and yet manages to elude the law for so long. 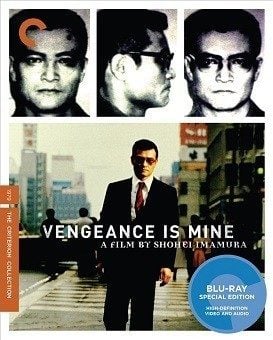 Ken Ogata plays Iwao Enokizu, the inevitably arrested, convicted, and executed felon who staged a sensational two and a half month rampage of deceit and death before he was captured. We see the arrest in 1964 and then travel back in time to pivotal moments of his life: the 1938 scene where he first began hating his father for being spineless in the face of an unfair authority figure, his 1946 spree at the end of World War II when he steals an American jeep and lands in the brig, a 1960 encounter with his wife where, on parole, he breaks things off with her once and for all. And, most importantly, we see three of the five murders in the film up close and personal in all their viciousness and brutality, directed with the same kind of visceral flair that Hitchcock brought to the necktie strangling in Frenzy and the agonizingly slow death of the agent in the kitchen in Torn Curtain.Even with the other two deaths that happen off camera, we see the chilling aftermath of Iwao’s indifference in splendidly staged moments by the director. The kindness the victims have previously shown to him means nothing, and director Imamura studies his implacable face in detail without revealing any real motivations behind his butchery (a suggestion that the murders were psychological substitutes for the one person he truly wanted to kill – his father – is a bit specious). This is the film’s weak link. While it might be impossible to peer fully into his soul to see the depths of his anger and dissatisfaction, the script to Vengeance Is Mine really doesn’t try. And the thing one keeps wondering throughout the entire running time is, “Why is he doing these things?” The film offers no real answers. Nor does the enigmatic ending as the killer’s wife and father attempt to scatter his bones after his execution offer any solution. Does the earth or the universe or some deity not want the bones and dust of so heinous a madman? Who knows? The surreal quality of this ending doesn’t jibe very well with the rest of the movie which is based solely on reality.In addition to Ogata’s compelling portrayal, there are memorable turns by Mayumi Ogawa and Nijiko Kiyokawa as a mother and daughter drawn into his orbit (they’re both actually rather bemused by his depravity once they learn the truth of his identity) and Mitsuko Baisho and Chocho Miyako as the father and wife who cause him such internal misery. The actors do first-rate jobs with the material they have to work with, and their uninhibited approaches to the several sexual scenes in the film are exemplary.

The film has been framed at 1.66:1 and is presented in 1080p using the AVC codec. While the transfer is completely artifact free, sharpness is only above average for much of the movie, and black levels vary from rich and deep to rather milky resulting in expected variance in the shadow detail. Color is realistic with appealing skin tones throughout. The transfer has a very film-like appearance with just enough grain to satisfy any who are looking for it. The white subtitles on the film (which can be turned off if one wishes) are easy to read. The film has been divided into 20 chapters.

The PCM 1.0 (1.1 Mbps) sound mix has decent fidelity and has been cleaned up quite wonderfully resulting in no hiss or crackle at all. But occasional potent explosions of music on the soundtrack do evince a bit of distortion in the upper levels. Otherwise, the mono mix of dialogue, sound effects, and music is smooth and typical of its era.

Audio Commentary: Japanese film scholar Tony Rayns offers one of his typically informative and insightful lectures on the film’s subject matter, technique, and reception.Shohei Imamura Interview (10:17, HD): video interview with the director taken from a 1999 Directors Guild of Japan documentary on Imamura’s career. He speaks briefly about the novel the film was adapted from and the actors he enjoyed working with this time out. But the director is a very low-key, soft spoken man, and what he has to say isn’t especially revelatory.Theatrical Trailer (3:01, HD)Teaser Trailer (3:02, HD)Thirty-Two Page Booklet: features color stills from the film, a brief overview of Vengeance Is Mine penned by the director as well as a brief essay on his approach to making movies, a critique of the film by Village Voice critic Michael Atkinson, and a question-and-answer interview with the director conducted by filmmaker Toichi Nakata.Timeline: can be pulled up from the menu or by pushing the red button on the remote. It shows you your progress on the disc, the title of the chapter you’re now in, and index markers for the commentary that goes along with the film, all of which can be switched on the fly. Additionally, two other buttons on the remote can place or remove bookmarks if you decide to stop viewing before reaching the end of the film or want to mark specific places for later reference.

Vengeance Is Mine is the Japanese equivalent to American films like American Psycho and Henry: Portrait of a Serial Killer. It isn’t as graphic as those more recent movies, but it’s every bit as disturbing to watch an unbalanced individual looking for ways to kill the unpleasantness within himself by attacking others. For thrill seekers, it may not offer enough of what you’re looking for, but for lovers of serious drama in a foreign language, it is certainly something to see.

Since this was shot in VistaVision, you'd expect the transfer to be a bit sharper.
You must log in or register to reply here.