Like all of his feature film historical biographies, Ken Russell's Valentino contains kernels of truth amid the excessive cinematic hyperbole that is the director's stock-in-trade. Strikingly shot with the stunt casting of one of the world's premiere dancers portraying one of cinema's earliest sex symbols, Valentino offers peeks and glimpses of a long ago era without ever really getting under the skins of the people who made it so glamorous and other-worldly, and the film is sometimes unnecessarily garish and ghoulish about a life that is primarily a sad, misbegotten one. Still, for those who are game, it's a movie worth experiencing. 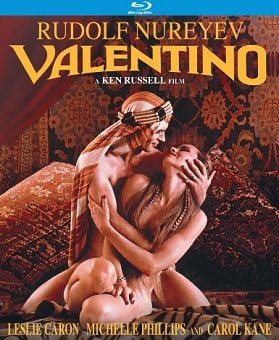 Enmeshed in a feverish love triangle in New York that might cost him his life, Rodolfo Alfonso Raffaello Pierre Filibert Guglielmi di Valentina d'Antonguolla (Rudolf Nureyev) books himself as an exhibition dancer on the West Coast with the drunken, untalented Majorie Tain (Leland Palmer) and gets himself discovered by screenwriter June Mathis (Felicity Kendal) for a prime part in The Four Horsemen of the Apocalypse becoming overnight a sought-after star. Meeting production designer Natasha Rambova (Michelle Phillips) on the set of Camille starring top star Alla Nazimova (Leslie Caron), the two become smitten with one another and are inseparable. But Natasha has her own ambitions for a major Hollywood career, and her off-the-wall suggestions aren’t good for Rudolph’s career getting him suspended from his studio and forcing him into a national tour for Mineralava Beauty Clay with George Ullman (Seymour Cassel) as his new promoter. With the tour drawing major attention, Hollywood mogul Jesse Lasky (Huntz Hall) wants him back and so does United Artists head Joseph Schenck (David de Keyser), but through it all, Valentino must battle continuous conflicts with the women in his life, the unfavorable press, and his disconcerting health problems.

It’s a very ambitious script that director Ken Russell and screenwriter John Byrum have penned with its costly period settings and costumes, but the rather meager $5 million production budget was spent wisely and well in bringing the Roaring 1920s to life. True, Russell’s attempts to reproduce snippets from some of Valentino’s classic films (The Four Horsemen, Camille, Blood and Sand, The Sheik, and Monsieur Beaucaire) don’t really come off – though he achieves one of the chicest moments in his cinematic career when after a passionate private lovemaking session between Rudolph and Natasha mostly in the nude (and with the clarity of this Blu-ray, nothing about Nureyev’s manhood is left to the imagination) on the set of The Sheik, the characters walk out of the tent opening and Rudolph reenters in black and white to perform a scene in The Sheik which is being shown to patrons on the silver screen. The script takes the position that Valentino was basically a weak-willed innocent who let himself be manipulated by strong-minded women or men who could often function as his salvation or his curse, so using his 1926 funeral as the framing device, the movie is basically narrated by a succession of important characters in his life who traverse his relatively brief show business career from New York to Hollywood.

The mood changes with each speaker, of course, as they sell their own importance in the making of the Valentino legend (meaning, by turns, Felicity Kendal, Leslie Caron, Michelle Phillips, and Seymour Cassel tell the story), but don’t expect Ken Russell to give a factual accounting of the man’s sad rise and fall. The film is dotted by Russell’s patented excesses, never more clearly delineated than during Valentino’s arrest for bigamy (marrying Rambova before his divorce from Jean Acker was finalized) where his night in a prison cell finds him tormented, racked, and pillaged by the scab-faced, toothless, leering mob that surrounds him (the camera pushed tightly into the faces of these people to accentuate their weirdness) as he’s jammed into a floor filled with vomit and urine and at the mercy of these grotesques (the visual monstrosities here could have been pulled from a similar scene with Glenda Jackson in the madhouse sequence in The Music Lovers). Russell also makes a delirious mind game of the climactic boxing match in which Rudy has to defend his masculine honor against a Tribune sports reporter Rory O'Neil (Peter Vaughan) where multitudes of couples waltz and tango around the ring between rounds as Rudy is savagely beaten to a pulp and critically injured (which, of course, wasn’t the cause of his death even though the boxing match did occur in real life).

In his first acting role in the movies Rudolf Nureyev isn’t always at ease before the camera, but he does better than anyone would have had the right to expect from an acting novice. Russell also does him the honor of allowing quite a number of dancing scenes (luckily Valentino was a dancer so these moments don’t seem pigeon-holed into the picture) with a simply smashing duet with Vaslav Nijinsky (Anthony Dowell) that comes near the film’s beginning and some terrific tango and flamenco turns as well (the tap dancing is less successful). Michelle Phillips offers an uneven portrait of Natasha Rambova, perhaps too large a role for the inexperienced actress. Leslie Caron is steely perfection as silent screen legend Nazimova while Seymour Cassel displays perhaps the movie’s best performance as Valentino’s manager and friend George Ullman. The great dancer Leland Palmer makes a pitiable no-talent hoofer in the brief role of Marjorie Tain, and other small but key roles are filled by Carol Kane (a starlet on the arm of Fatty Arbuckle), Penelope Milford (as an actress Rambova insists Valentino make love to in order to prove to the crew his lovemaking prowess in one of the film’s more amusing sequences), and Huntz Hall as the unscrupulous, grasping studio head Jesse Lasky.

The film’s original theatrical aspect ratio of 1.85:1 is faithfully presented in this 1080p transfer using the AVC codec. Sharpness is excellent throughout, and color is quite rich with only the occasional too pink flesh tones seeming to be a little off early-on. Contrast has been consistently maintained, and black levels are very good. Only occasional dust specks appear here and there to momentarily spoil the surprising quality of the film element. The movie has been divided into 8 chapters.

The DTS-HD Master Audio 2.0 stereo sound mix has fine fidelity, but the stereo separation of music and sound effects from the dialogue comes and goes, occasionally being only found in the center channel and other times more generously spread across the front soundstage. No age-related artifacts are present to deflect one’s attention from the film.

Audio Commentary: film historian and critic Tim Lucas offers an excellent critique and analysis of the movie. Even with several lengthy quiet passages, he offers very interesting background information on the production and its personnel and a balanced admiration for the movie gained from several viewings. Fans of the film will really enjoy listening to his information and opinions.

Trailers from Hell (3:21, HD): director Bernard Rose offers a brief video essay on the movie also offering more positive than negative things to say about it.

The Silent Years Introduction and Afterward (17:08, SD): director Orson Welles serves as host for the series offering an introduction and concluding commentary for the Valentino film Blood and Sand. He also offers some film clips of Valentino from his pre-star days and a Will Rogers silent parody of The Sheik.

Valentino’s Funeral Procession (3:03, SD): vintage footage showing the thousands of mourners lined up at Campbell’s in New York and for the service in Hollywood after his death.

Photo Gallery (1:08, HD): a montage of black and white behind-the-scenes shots taken during the production of Valentino.

Unless you’re looking for a factual account of the life of silent screen legend Rudolph Valentino, Ken Russell’s Valentino is an entertaining if melancholy fantasia on the silent screen era and the perils of stardom for someone ill-equipped to handle it. The Kino Studio Classics Blu-ray makes the best possible case for this most unusual movie.