FROM THE CREATORS OF HAPPY DEATH DAY,
VINCE VAUGHN AND KATHRYN NEWTON BODY SWAP
IN THE GENRE BENDING SLASHER COMEDY
AVAILABLE TO OWN FOR THE FIRST TIME 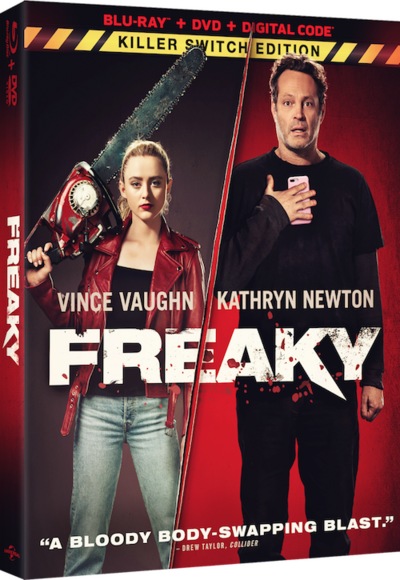 BE THE FIRST TO OWN IT ON DIGITAL JANUARY 26, 2021
BLU-RAYTM AND DVD FEBRUARY 9, 2021
FROM UNIVERSAL PICTURES HOME ENTERTAINMENT


Universal City, California, January 19, 2021 – Prepare for a FREAKY take on the body-swap movie which only Blumhouse, makers of Happy Death Day & The Purge franchise, could bring: a teenage girl switches bodies with a relentless serial killer! From the deliciously debased mind of writer-director Christopher Landon (Happy Death Day, the Paranormal Activity franchise) and prolific horror producer Jason Blum (Halloween, The Purge franchise), comes a horror-comedy about a stalker, a high school senior, and the brutal truth about surviving high school available on Digital on January 26 and on Blu-ray™ and DVD on February 9. FREAKY is “the most purely enjoyable horror movie made in years” (David Sims, THE ATLANTIC). Hailed as “an absolute blast - fun, frantic, horror/comedy mash-up” (Drew Taylor, COLLIDER), the Killer Switch Edition continues the fun and scares with exclusive bonus content including deleted scenes, a behind-the-scenes look at the making of the film and a feature commentary with Co-writer/Director Christopher Landon. With an 83% "fresh" score on Rotten Tomatoes and critical praise for Vaughn and Newton as “the new killer comedy scream team” (Rachel Smith, CELEBRITY PAGE), Vaughn won a Critics Choice Super Award for Best Actor in a Horror Movie.

High school senior Millie (Kathryn Newton, Blockers, HBO’s “Big Little Lies”) is just trying to survive being the unpopular kid when she becomes The Butcher’s (Vince Vaughn, Wedding Crashers, Couples Retreat) next target. Their fateful encounter gets twisted and wake up in each other’s bodies. Now looking like a towering psychopath, Millie learns she only has 24 hours to reverse the curse and get her body back before the switch becomes permanent and she’s trapped in the form of a middle-aged maniac forever. With some help from her friends—ultra-woke Nyla (Celeste O’Connor, Ghostbusters: Afterlife), ultra-fabulous Joshua (Misha Osherovich, The Goldfinch) and her crush Booker (Uriah Shelton, Enter the Warriors Gate)—Millie races against the clock to reverse the curse while The Butcher discovers that having a female teen body is the perfect cover for a little Homecoming killing spree.

BONUS FEATURES on BLU-RAYTM, DVD and Digital:
Deleted Scenes
The Butcher Lends a Hand
Charlene Hears a Rumor
Late for the Party
Split Personalities: Millie vs. The Butcher - Two opposing characters. One killer chemistry! Go behind-the-scenes to see how Vince Vaughn and Kathryn Newton worked together to bring these two very different characters to life and how they created distinct personal traits for both. This piece will focus on the magnetism between Vaughn and Newton, and how that chemistry raised the stakes for two characters stuck in such a strange situation.
Crafting the Kills - This feature will take viewers into the “Wood Shop” set to see how all of the various elements and departments come together to create an extraordinary kill that fans will talk about for years to come. We will also discuss the inspiration behind this bilateral bisection, what makes it both fun and horrifying, and how it is different from anything else you have seen in other horror films.
Christopher Landon's Brand of Horror - Blending horror and comedy is a difficult task that not many can achieve, but Christopher Landon has proven time and time again that he is uniquely skilled at it. FREAKY is no different. Learn how Christopher’s vision brought new energy to the concept and elevated the story, all while creating a fun and proficient working environment. This behind-the-scenes look at how he weaves humor and gore together will give fans an intimate understanding of why a Christopher Landon film is a genre of its own.
Final Girl Reframed - The concept of a "Final Girl" is nothing new in the horror genre. However, Millie isn't your typical Final Girl. We take a closer look at all the ways FREAKY takes your genre expectations and smashes them
Feature Commentary with Co-writer/Director Christopher Landon

FREAKY will be available on Blu-rayTM, DVD and Digital.
Blu-rayTM unleashes the power of your HDTV and is the best way to watch movies at home, featuring 6X the picture resolution of DVD, exclusive extras and theater-quality surround sound.
Digital lets fans watch movies anywhere on their favorite devices. Users can instantly stream or download.
MOVIES ANYWHERE is the digital app that simplifies and enhances the digital movie collection and viewing experience by allowing consumers to access their favorite digital movies in one place when purchased or redeemed through participating digital retailers. Consumers can also redeem digital copy codes found in eligible Blu-rayTM and DVD disc packages from participating studios and stream or download them through Movies Anywhere. MOVIES ANYWHERE is only available in the United States. For more information, visit https://moviesanywhere.com.