One of my favorite Laurel & Hardy shorts is Tit for Tat (1935). Stan and Ollie open an electrical repair shop next to a grocery store and try to make friends with their new neighbors. However, the grocer (played by Charlie Hall) sees Ollie flirting with his wife (Mae Busch) and a hilarious feud punctuated by one-upmanship ensues. I couldn't help but think about Tit for Tat while watching Used Cars, a raucous, profane and extremely funny comedy which has now been released by Twilight Time with a gorgeous transfer courtesy of Sony. 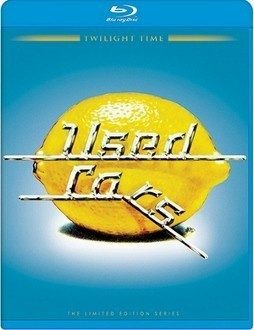 There's an opening for State Senate. The machine's looking for a fresh face, Luke, somebody with style, somebody with flair, somebody with no axes to grind who just wants to tell the people what they want to hear. Luke, they're looking for me! - used car salesman Rudy RussoRudy Russo (Kurt Russell) is a used car salesman at a dilapidated dealership somewhere in Arizona which is owned by Luke Fuchs (Jack Warden). Over the opening credits we get a quick lesson about the tricks of the trade which have given the used car industry a black eye. As we see Rudy working on a high-mileage Chrysler which is being readied for sale, one might think that he is just making some repairs - but in reality he is rolling back the odometer. He uses chewing gum to reattach a rear bumper, pumps up a flat tire with an aerosol tire sealant, and generously sprays the interior of a car with the scent of a brand-new vehicle. He interrupts his work for a moment to call "Good morning" across the street to Luke’s brother, Roy Fuchs (also played by Jack Warden), who owns a much nicer auto dealership called Auto Emporium. Roy acknowledges Rudy's greeting by spitting, to which Rudy chuckles to himself, "Same to you, asshole."Luke and Roy may be brothers, but they have no use for each other. Luke is a good-hearted sort who drinks too much and has a bad heart, and he tries to restrain Rudy and his other salesman, Jeff (Gerrit Graham), from pushing their unethical sales tactics too far. Rudy wants to get into politics, and he has been guaranteed a State Senate seat if makes a large donation to the party, but he is $10,000 short and he needs to sell a lot of cars in a hurry. Luke warns him that any given customer could be an undercover investigator for the Consumer Protection Agency. "We're still on probation for consumer fraud," he reminds Rudy. Roy, an oily type who favors leisure suits, is more ambitious and more crooked than his brother. He has been tipped off that a new freeway is being built, and he has been funneling money to the mayor's slush fund to guarantee that there will be an exit ramp which empties out across the street, on the site of Luke's car lot. However, Roy's lawyer, Sam Slaton (Joe Flaherty), has brought bad news. The mayor has decided to build the exit ramp over Roy's lot in order to counter allegations of conflict of interest. "This country's going to the dogs," snarls Roy. "You know, it used to be when you bought a politician, that son of a bitch stayed bought."Roy knows that Luke will never sell his business, so he hatches a plan to give his brother a heart attack. He instructs a new employee to pretend to be a customer and take Luke out on a harrowing test drive. Roy expects that he will then inherit Luke's business because the only other heir, Luke's daughter, has not been heard from in ten years. In the meantime, Rudy is trying to close a sale with a customer who, at the last minute, has demanded that the agreed-upon price be reduced. "Fifty bucks never killed anyone," is the customer's refrain. Well, maybe it does. When Rudy learns what Roy has done to Luke, the war is on - tit for tat.Complications arise when Luke's daughter Barbara (Deborah Harmon) shows up unannounced. Rudy, Jeff, and mechanic Jim (Frank McRae) want to get her out of town as soon as possible, but those plans go awry when Rudy starts to fall for her. In the meantime, Rudy has been hatching plans to get free advertising by using the talents of two electronics geeks (played by Michael McKean and David L. Landau, better known as Lenny and Squiggy on "Laverne and Shirley") to cut into live television broadcasts with pirate commercials. The most audacious act of pirating occurs when they pre-empt part of a national address by President Jimmy Carter!Used Cars requires more than a little suspension of disbelief, but it is so funny and so original that the viewer does so willingly. My only criticism is that the climactic scene goes on a bit too long, but for the most part the pacing by director Robert Zemeckis (who co-wrote the script with Bob Gale) keeps the action moving along at a pleasing pace. It is certainly a subversive film in that there are no traditionally "good" protagonists. Rudy is charismatic, but he has no qualms about lying to his customers and selling lemons at inflated prices. He shines only in comparison to the ruthless Roy.Kurt Russell is excellent as the handsome, gregarious, and ethically-challenged Rudy, and he is ably supported by Gerrit Graham and Frank McRae. Nevertheless, it is Jack Warder who steals the show in his dual role as Luke and Roy (except that he is sometimes upstaged by Toby, Luke's beagle). Al Lewis, perhaps best known as Grandpa Munster, has a nice cameo as a judge who would rather be golfing. Deborah Harmon is attractive and appealing as Barbara, who is the closest thing Used Cars has to a sympathetic character. Co-produced by Steven Spielberg and John Milius, Used Cars is a very funny film with more than a few laugh-out-loud moments.

The 1080p high definition image is encoded with the AVC codec and appears to be properly framed at 1.85:1. The overall image quality is up to Sony's usual standards, which is to say that it looks superb. The picture is sharp and highly detailed, and an appropriate level of film grain has been retained to provide a pleasing, film-like experience. Colors are accurate and properly saturated. Contrast is strong, shadow detail is very good and black levels are deep. The film elements are in excellent shape and I saw no signs of dirt or damage.

This Blu-ray of Used Cars offers two audio options, English 5.1 DTS-HD MA and English 1.0 DTS-HD MA. Purists will probably want to choose the original mono mix, although I was pleased with the way that the 5.1 mix adds punch to the test drive scene and other scenes of mayhem. Dialogue is clear and understandable throughout, and English SDH subtitles are available for viewers who need them. The score by Patrick Williams (with additional music by Ernest Gold) is given a pleasing soundstage. Bobby Bare sings the film's theme song over the closing credits.

The extras are surprisingly plentiful on this Twilight Time release.There is a very funny audio commentary featuring Robert Zemeckis, Bob Gale and Kurt Russell, who clearly are having a terrific time watching and commenting on the film. "This film is structured on a classic Frank Capra movie, except that everybody lies."There are two isolated score tracks. One is the original film score, and the other is an unused score. You only have to compare the music which plays over the opening credits to realize that they chose the better score for the final cut.Four minutes of outtakes and bloopers are shown in standard definition 4:3.Promotional materials include a television ad which Kurt Russell made for Darner Chrysler-Plymouth, the Mesa, Arizona car dealership which was the location of Roy Fuchs' car lot in the film. There also is a radio interview with Kurt Russell and seven radio spots for the film.There are several photo galleries which show stunts, unused ad concepts, some behind the scenes shots, and a collection of posters and lobby cards.The original theatrical trailer is in very good shape and somewhat surprisingly bleeps out some profanity but includes brief nudity.Also included is an eight-page booklet with an informative and entertaining essay about Used Cars by film historian Julie Kirgo.

Used Cars is a very funny film which comes to Blu-ray in a sparkling presentation courtesy of Sony and Twilight Time. This is a limited edition of 3,000 copies, so readers who are interested in purchasing it should go to the Screen Archives website and confirm that copies are still available.

Very funny movie, an excellent looking disc and all the extras from the DVD are ported over (and TT added the two isolated scores) so any fan should jump on this release.

I hate that these are limited. $30 is so much for one film. But that's the market... definitely one worth that for me. But staying with my DVD for now.

I echo what has been said so far, very funny film. right on the money review. Everybody is hilarious, but for me Graham is the one to watch. Can't see a red car without seeing that scary as hell scene when he's almost hit. he and Toby, what a team! ( I'd love to have his picture from this as my AV. But that looney is not going anywhere... )

I always quote this film when one of my dogs starts barking at me for something. "I hear ya Scooter, g-damnit!"
You must log in or register to reply here.