On the anniversary of their friend’s suicide, a group of friends find themselves being cyber stalked during their Skype conference call in Unfriended, the latest in yet another cheaply made found footage thriller that is neither scary nor interesting. 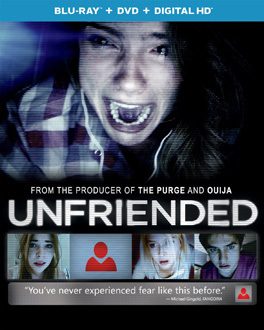 Laura (Heather Sossaman) commits suicide on the high school’s outdoor basketball court after a humiliating video of her taken at a kegger is posted on YouTube, followed by a slew of bullying text messages on her Facebook that urge her to take her own life. One year later, on the anniversary of her death, Blaire (Shelley Hennig) and her boyfriend Mitch (Moses Storm) are having a flirtatious, late night video conference on Skype, which is quickly interrupted when their friends, Jess (Renee Olstead), Adam (Will Peltz), and Ken (Jacob Wysocki) join in the call. They suddenly realize that an unknown caller has joined in, eavesdropping on the call, but the ability to drop him has been greyed out. They try several times to shake the stalker off, including disconnecting from the conference and starting over, but he keeps dropping in. The stalker begins to taunt Blaire by starting up a personal message chat on Facebook, using Laura’s account, eventually leading to the caller threatening to reveal each friend’s innermost secrets, also threatening that if they disconnect from the chat, they will be killed. Is it really Laura, back from the grave to exact revenge on the friends who pushed her to suicide? Or is it a hacker having fun at their expense?

Personally, I couldn't care less. A lot of that has to do with the fact that none of the characters in Unfriended are even remotely likable. The audience has no sympathy to what fates are about to befall each of the characters, as they are clearly deserving of what is so apparently coming to them. To make matters worse, the entire film (if you can call it that) is nothing more than an 80-minute Skype conference call (in real-time), taken from a video feed off of Blaire's laptop, as we watch her iChat with Mitch while the rest are jabbering with each other on Skype, choose various songs from her Spotify library, skim through Facebook, etc. Director Leo Gabriadze fails to bring any suspense or tension to the story, allowing the film’s sound design to dictate when a character is about to be killed whenever a low rumble resembling an air conditioner increases in volume. Unfriended is an all-too-predictable and not at all scary found footage horror cheapie, made for around $1 million and shot in 12 days, that unfortunately grossed over $30 million at the domestic box office, with a sequel already announced for 2016.

The 1080p transfer, using the AVC codec, isn’t likely to win any awards, but it is what it is. Since this is, essentially, a video feed of one of the character’s laptop screens, with streaming video and program windows, any anomalies are intentional. The Skype video feeds are littered with compression artifacts, banding, macroblocking, noise, etc., everything you would expect to see on your own conference call. Detail in the program windows is exceptional, and, frankly, can’t imagine anyone watching this on anything other than Blu-ray (or possibly VUDU HDX or Netflix HD), as the text is almost illegible on the included DVD copy.

The DTS-HD Master Audio 5.1 replicates the cyberworld of the film quite well. As expected, this is a front-heavy track, almost entirely mono with some occasional stereo separation when Blaire is listening to music tracks from her Spotify library, and brief uses of surrounds for atmospheric effects. Dialogue is often thin and tinny, like you would hear during a Skype call, yet it is almost always audible and intelligible (except when it’s not supposed to be).

DVD Copy: The movie in 480p and Dolby Digital 5.1, with trailers for Ouija, Trainwreck, Furious 7, Pitch Perfect 2, and The Man With the Iron Fists 2.

In case you couldn’t tell, I was not a big fan of Unfriended, but to be fair, this movie isn’t for everyone, and there are people out there who really liked it. This reviewer isn’t one of them, but the low-tech of the movie actually benefits from the higher resolution that Blu-ray can offer.

So, how much less could you care??


A well formulated review on a movie not worthy of your prose. Two hours of your life you can never get back, my friend. That's how I always think about a movie that has so abysmally insulted my intelligence.

Alf S said:
So, how much less could you care??
Click to expand...

Thanks. I fixed the typo.
You must log in or register to reply here.