The venerable crime-thriller has become a rarity at the U.S. box office. Gone are the heady days where noir-like and gritty mysteries lay out their plots and twists with compelling, often badge-wearing protagonists pitted against mystery and deceptions that take them into the dark corners of their world.

For decades, intriguing crime-thrillers that elevated mood and patiently unfolded stories, with minimal action, held a respected space among the theatrically released films of the year. In the 1980s it was films like Dressed to Kill, Blow Out, Jagged Edge, and Witness, while the 1990s, arguably the last great decade of crime thrillers, saw films like Ransom, Blink, Presumed Innocent, Dead Again, Jennifer 8, Copycat, and Double Jeopardy. 1996 saw the release of Unforgettable, director John Dahl’s mind-messing mystery, but the film misfired terribly at the box-office and ran afoul of critics’ opinions. Today, nearly twenty-years on, Unforgettable is worthy of another look – perhaps because of its curious blend of solid direction and flawed ideas and not in spite of them. 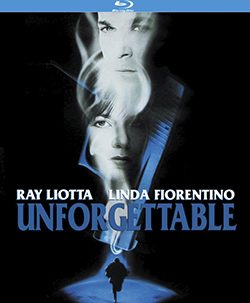 “Okay... okay, I want you in my lab. I need uh, full blood work, an EKG, full respiratory - and a brain scan wouldn't be a bad idea. Make sure you have one.”

City medical examiner, David Krane (Ray Liotta) was the prime suspect in the death of his wife. He’s maintained his innocence while always looking for ways to try and understand who took his wife from him. A chance encounter at a dinner gala allows him to hear of cutting edge medical research allowing the transfer of memory, using spinal fluid, between lab rats. The presentation, given by Dr. Martha Briggs (Linda Fiorentino) draws yawns from the crowd, but Krane is curious. After seeing her work in person, and learning of the process, Krane breaks into her lab to steal the special formula. Using the fluid from his wife’s stored materials (kept in the police department’s lab), Krane performs the first human trial – and it works! But he isn’t able to see, or comprehend, enough of the memories to be certain. When Dr. Briggs learns of his outrageous thievery, and dangerous actions, she is forced to monitor him as he single-mindedly pursues his wife’s killer, and unravels the mysterious plot behind it.

Unforgettable uses exaggerated science as a footway to delivering a novel crime-thriller conceit, the notion that fluid extracted from the spine of a deceased victim, mixed with other elements and injected into someone else will allow that someone to experience their memories. It’s all quite silly when examined, but treated with seriousness and in earnest by director Dahl and actor Ray Liotta – who must writhe and freak-out when gripped by the pain of the experience – the experience becomes oddly compelling.

In many mays, its John Dahl’s direction of Unforgettable, with its brooding sense of time and place, and welcome evocation of the well-established elements of film noir; damp streets, smoky rooms, that gives the film a memorable identity. Coupled with Ray Liotta’s casting as the medical examiner, playing the role of the hard-boiled detective and supplying his David Kane with a natural intensity with which he imbues all his characters, Unforgettable manages to stand out twenty years after failing to connect with audiences or critics. But it should be noted that the film’s flaws have only amplified since its original release too – notably the weak characterization of Dr. Briggs and Linda Fiorentino’s frustratingly poor portrayal of what should have been a formidable and intellectual partner for Liotta’s Kane. Fiorentino is a fine actress, but her clumsy, uncertain character denies the vital chemistry that could have challenged the story more deeply, or at least given for a more satisfying examination of the emotional repercussions and moral implications at hand.

Still, despite all the knocks against the film – the silly science, the shallow examination of Kane’s relationship with his late wife (the backstory is offered merely as a plot point) and Linda Fiorentino’s disappointing character, Unforgettable is unavoidably entertaining. Anchored by an eminently watchable (and likeable) Ray Liotta, and featuring some fine supporting players such as Kim Coates’ slimy bad-guy, Peter Coyote’s cigar chewing Police Inspector, and David Paymer’s weedy but humorous ME technician.

I’ve always enjoyed Unforgettable. Purchasing the DVD back in the day, I was aghast to find the presentation was full-screen (despite the sleeve indicating widescreen). It is, then, with great pleasure to watch the film in its correct 1.85:1 aspect ratio.

The first reel of the picture is smoky, moodier than later scenes, and the level of detail you’ll see will reflect that. As the film progresses, you will appreciate the grain structure and the finer details as they come through, particularly during the brighter daylight scenes (the scene outside the church, for example). Colors are quite pronounced, and the solid cinematography, with well-placed shadows, clever use of light, and well-designed disorienting sequences demonstrating the fractured nature of experiencing the memories of the dead, shine in high definition.

With a 5.1 and 2.0 DTS-HD Master Audio track, Unforgettable has never sounded better. Christopher Young’s wonderful score soaks the speakers with its finely attenuated thriller tones (really, was there anyone better at delivering a score to a thriller than Young?), and dialogue, while a little soft at times, particularly in earlier scenes, is crisp.

The surrounds, and notably the potent low frequency effects, do overwhelm the audio at times, punching into the experience with a delightful energy and surprisingly enveloping power that seems a little at odds with the rest of the audio levels. I found myself adjusting the volume up and down between the strong sound sequences and quieter moments of dialogue.

A short collection of special features, all in standard definition except for the theatrical trailer. The inclusion of the trailer is welcome and the unedited b-roll footage is a nice peek behind the curtains of filmmaking, raw and highly interesting.

In many ways, Unforgettable was emblematic of the shift the crime mystery/thriller took away from traditional concepts, layering in reality-twisting or supernatural tones. Certainly traditional crime-thrillers still made their way to cinemas, but audiences had largely moved on. Today, television is the prime ground for crime thrillers, dramas, and mysteries.

Unforgettable was dismissed by critics and ignored by audiences upon its release, but has enjoyed more appreciation in some corners over the years by fans of absurdist crime-thrillers, John Dahl’s eye for staging characters among bleak situations, and Ray Liotta’s interesting body of work. Kino brings the film to high definition for the first time, and the results are perhaps better than most would have believed a film this forgotten would have received.