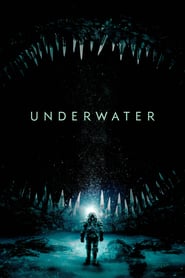 
Tagline: 7 miles below the ocean surface something has awakened

Plot: After an earthquake destroys their underwater station, six researchers must navigate two miles along the dangerous, unknown depths of the ocean floor to make it to safety in a race against time.

This trailer did kind of pull me in as yes, it looks like Alien underwater. I know little about this though and obviously it could be just terrible. The people that made it promise it is a lot more than Alien underwater. Is this one that has anybody excited or interested in seeing it?

The poster obviously points to something very big with a lot of teeth...

I love underwater movies like this (The Abyss, Sphere, Leviathan, etc.) so I’m in.

Looking at the director's IMDB credits, he directed 2014's The Signal which was a nice little SF film; so maybe this has some potential. I'm somewhat intrigued by the creature design and I almost always enjoy survival stories (assuming there are any. )

Should have some good scares with the creature emerging out of the murky water.

Neil Middlemiss said:
I love underwater movies like this (The Abyss, Sphere, Leviathan, etc.) so I’m in.
Click to expand...

I was thinking the same thing. How is this any different than Leviathan?

Walter Kittel said:
I'm somewhat intrigued by the creature design and I almost always enjoy survival stories (assuming there are any. )
Click to expand...

I assume Kristen Stewart's character will survive. Can't have the strong female lead getting eaten by a monster.

Richard V said:
I was thinking the same thing. How is this any different than Leviathan?
Click to expand...

Well, it isn't, but that was over 30 years ago and there are a couple of generations that have never seen or heard of that movie. Kristen Stewart and "friend". There may be a bit of Lovecraftian influence in the design.

Well, let's hope its better than Leviathan. The creature design (at least the teasers we've seen) certainly points to better FX. (30 years is a long time for the advancement of special effects.)

Yeah, I assume that Ripley (err... Norah) will survive.

I’m looking forward to this one. The trailer is intriguing.

Walter Kittel said:
he directed 2014's The Signal which was a nice little SF film
Click to expand...

That does go in the positive column for me as well as I thought The Signal was an interesting science fiction film. So this could be more than meets the eye.

I liked the director's previous two films. This one was shot in 2017!

It should be able to recoup an $8 million budget. Oh, $80 million dollars. Uh-oh.

Doesn't seem outrageous for a deep sea adventure/disaster/horror FX film, and given that mob dramas seem to run at least double that these days.

Monster movie with a couple at least decently known names... you might be able to raise nearly that preselling international distribution rights.

Watching Leviathan (1989) now via Amazon Prime. Looks and sounds pretty good. The acting isn't great, but there are some neat Stan Winston practical FX. Though it does seem kind of like an underwater version of The Thing.

Yeah, Leviathan, uh, "borrows" quite a lot from The Thing design-wise. I like Deep Rising better, but it's a fine line.
Movie information in first post provided by The Movie Database
You must log in or register to reply here.