There is a tangible “you are there” quality to Roger Spottiswoode’s brilliant Under Fire: whether one is lounging in a hotel by the pool or standing in the middle of a Nicaraguan street in the middle of short burst of gunfire, one feels a palpable kick while watching this riveting docudrama detailing the last weeks of the despotic Somoza government before falling to the Sandinistas. Stunning cinematography, a cadre of superlative actors working at the top of their game, and an intelligent story of politics wrapped around a love triangle handled with rare astuteness make this a film to be treasured. 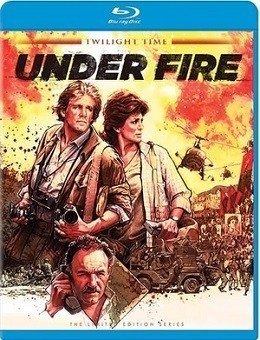 Photojournalist Russell Price (Nick Nolte) follows his friends radio reporter Claire Stryder (Joanna Cassidy) and Time reporter Alex Grazier (Gene Hackman) from a wrapped assignment in Africa to cover the explosive civil war going on in Nicaragua in 1979. At first Price is only interested in the pictures as he meets various people connected to the revolution on both sides including two very complex people, an acknowledged spy Jazy (Jean-Louis Trintignant) who we later learn is instrumental in trying to thwart the Sandinista rebels and a gung-ho mercenary (Ed Harris) who travels the world looking for wars to fight. But things change when Price and Claire fall in love after Alex leaves the country for a cushy TV anchor position, and then they decide the real story is with the rebel leader Rafael whom they set out to find. Once they do, they become complicit in the rebellion which will have a life-threatening effect on them and everyone else in their orbit.The screenplay by Ron Shelton and Clayton Frohman squeezes in much political backstory which director Roger Spottiswoode then fleshes out in ways which quickly wrap the viewer up in the events of this notable rebellion. Our entrance into this Central American conflict comes through a brilliantly conceived notion of the camera often shooting scenes we’re watching and then freezing in a black and white photograph for a few seconds showing us the kinds of pictures which would have been front page fodder back in the day. Filming in Mexico, the director has turned a town into a most believable Nicaraguan war zone where bodies lie dead in the street to the complete indifference of many who must walk around them, where gunshots erupt when one least expects them (a mad dash across rooftops by the protagonists with a group of friends as potshots come from several directions is electrifying, and several face-to-face confrontations between the Americans and those with guns are heart-stoppingly tense), and where press credentials may possibly save you or may help separate you from the crowd in order for someone to make a violent point. Woven through all this on-going battle is a touching and sensitively handled story of two men and one woman falling either out of or into love but without the overly romantic melodrama that would take away from the more compelling story of the civil unrest. Like Oliver Stone’s Salvador which would come along a few years later (and which Twilight Time has also brought out on Blu-ray), the feeling that things are happening in real time right before your eyes is overtly discernible.The film represents a high water mark for Nick Nolte who is completely convincing as a hard-nosed photojournalist who would risk life and limb for a great shot but one who grows as a person during the course of the film’s events. Gene Hackman is his equal in a grounded and real portrait of a man tired of life lived out of suitcases. A great moment occurs when he spies some snapshots of his former lover taken by his now-rival where he figures out in the blink of an eye what the score is and his shoulders sag a little: great, subtle acting. Joanna Cassidy offers a solid if less flashy turn as the reporter caught between the two men but eager to continue on the journey to the truth about the rebellion. This was Ed Harris’ breakout year with both this film and The Right Stuff, and even with his limited screen time, he’s just mesmerizing every time he pops up, often in the most unexpected places and always with charisma to spare. Hamilton Camp as another reporter and Richard Masur as a press secretary for the corrupt Somoza make good impressions with again limited time on-screen. Jean-Louis Trintignant’s enigmatic French spy has some surprises in store for the viewer as well.

The film’s 1.85:1 theatrical aspect ratio is faithfully rendered in a 1080p transfer using the AVC codec. Filmed by the masterful John Alcott, the images are often startlingly gorgeous especially in lower light levels where the details in faces and hair come forth beautifully. Color and contrast are consistently maintained with flesh tones natural and appealing. Black levels can be stunning with excellent shadow detail. Only some random dust specks mar an otherwise reference quality transfer. Subtitles are presented in yellow and are always very easy to read. The film has been divided into 12 chapters.

The DTS-HD Master Audio 2.0 stereo sound mix offers the Oscar-nominated Jerry Goldsmith score to beautiful advantage. Dialogue has been well recorded (even with Nolte’s occasionally mumbling his lines) and has been placed in the center channel. Sound effects have just enough pop to register noticeably with the listener. While the low end might be just a tad light in the mix, it doesn’t have a major impact on the way scenes land.

Audio Commentaries: there are two on the disc. In the first, producer Nick Redman hosts director Roger Spottiswoode, assistant editor Paul Seydor, and photojournalist Matthew Naythons for a lively and complete discussion of the film’s shooting, the political situation, etc. In the second, Redman and film historian Julie Kirgo are joined by music producer Bruce Botnick, music editor Kenny Hall, and film historian Jeff Bond who by and large discuss the music by Jerry Goldsmith which earned the film’s only Oscar nomination. Both tracks are very entertaining which fans of the movie are going to really enjoy.Isolated Score Track: Jerry Goldsmith’s haunting and memorable score is presented in DTS-HD Master Audio 2.0 stereo.Joanna Cassidy Interview (3:06, HD): the actress reminisces about her work on the film and her screen test and working relationship with Nick Nolte.Photo Archive (HD): Matthew Naythons presents thirty-five black and white and color photos.Theatrical Trailer (2:57, SD)MGM 90th Anniversary Trailer (2:06, HD)Six-Page Booklet: contains a selection of color stills, original poster art on the back cover, and film historian Julie Kirgo’s celebratory essay on the movie.

Clearly one of the best of the Latin American civil war docudramas, Under Fire grabs the attention from the first shot and holds it for over two hours. It’s a marvelously effective and gripping movie which has lost none of its power with the passage of time. There are only 3,000 copies of this Blu-ray available. Those interested should go to www.screenarchives.com to see if product is still in stock. Information about the movie can also be found via Facebook at www.facebook.com/twilighttimemovies.

It's a great movie.

It's a great score.

I'm glad it's appreciated. It teaches you a lot about what's wrong with certain political policies. And it's a very good film to boot.

This is described as a "docudrama", what exactly is that? Is it not a traditional narrative?

Documentary styled narrative often based on real events.
You must log in or register to reply here.