What a year this has been for “Weird Al” Yankovic. His latest CD, Mandatory Fun, debuted at #1 on the Billboard chart (the first time a comedy album has done so since 1963’s My Son, the Nut by Allan Sherman), which is also the last album to be released under his original contract. This year also marks the 25th anniversary of his feature film, UHF, now available on Blu-ray from Shout! Factory, porting over many of the features from the previous DVD release from MGM. 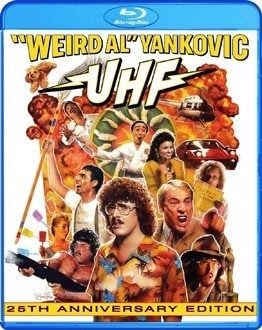 George Newman (“Weird Al” Yankovic) is a daydreamer, allowing his mind and imagination to wander, often imagining himself as Indiana Jones or Mark Knopfler while at work. Unfortunately, this tends to lead to he and his roommate, Bob (David Bowe), losing their jobs at places like Big Edna’s Burger World, much to the dismay of George’s girlfriend, Teri (Victoria Jackson). When his Uncle Harvey (Stanley Brock) wins the deed to UHF channel 62 in a poker game, Aunt Esther (Sue Ane Langdon) recommends hiring George as the new station manager. George and Bob arrive at the station to find it on the brink of bankruptcy, and begin to come up with their own original programming, such as Wheel of Fish, Secrets of the Universe, and hands over the kids variety show to Stanley the station janitor (Michael Richards), renaming it Stanley Spadowski’s Clubhouse. The ratings skyrocket, beating out many of the network shows at local affiliate channel 8, run by R.J. Fletcher (Kevin McCarthy), who devises a plan to wipe UHF 62 off the air, forever.This bare bones plot (if you can actually call it a plot) allowed writers Yankovic and Jay Levey (the film’s director and Yankovic’s longtime manager) to hang various parodies of TV shows, TV ads, movies, and music videos on to, to a varying degree of success. To the average viewer, your mileage may vary on the level of humor one may find in UHF. Many of the jokes are aimed at the lowest common denominator, often seeming sophomoric (the news piece on gun control, for example), but the movie does deliver some clever bits (Spatula City and Wheel of Fish have gone on to become staples of Yankovic’s live concerts). Levey and Yankovic surround themselves with a talented cast, especially scene chewing Kevin McCarthy as the rival station owner, a role that served the character actor well for the latter stage of his career in films like Innerspace and Matinee. Michael Richards was allowed to pretty much improvise much of his character while filming, adding a unique oddness to Stanley. Fans of 1980s era General Hospital will likely get a kick out of Anthony Geary’s comic turn as the station engineer Philo (a role originally offered to a pre-MST3K Joel Hodgson). The weakest link is Yankovic himself, who just barely gets by with his (then) limited acting ability. UHF may not be a movie for everyone, but the star’s fans have come to embrace this film over the years, elevating it to cult status.

UHF was never a great looking film to begin with, and the 1080p transfer provided to Shout! Factory by MGM (compressed using the AVC codec, and retaining the film’s intended aspect ratio of 1.85:1) is fairly solid, with accurate and consistent colors that are never over saturated, decent black levels, and an increased level of detail when comparing this release to MGM’s previous DVD from 2002.

The only audio option on UHF is a decent PCM 2.0 stereo track, replicating the film’s original Dolby Stereo optical mix. This is a very standard comedy mix, front heavy with minimal surround presence. Dialogue is directed mostly to the center channel when played back in Pro-Logic mode, never getting lost in the sound effects or music.

Most of the special features from the 2002 MGM DVD release have been ported over, with one notable addition and one glaring omission. Although listed on the cover and on press release materials, none of the Easter Eggs from the 2002 DVD have been ported over (such as Al telling you that a particular feature is on the other side of the disc, or making a surprise visit from the bottom of the screen during the commentary track). In fact, there are absolutely no Easter Eggs to be found here (Shout! Factory has responded, indicating that at the last minute they were unable to include them on this release, but did not have enough time to remove them from the artwork or press releases). What is rather obvious on this release, though, is the lack of involvement by “Weird Al” himself, especially considering how involved he was in the DVD release.Audio Commentary by Al Yankovic and Director Jay Levey: This is the same commentary track from the previous MGM 2002 DVD release. The two are obviously very good friends, often joking to one another, although Yankovic does much of the talking, dispensing endless trivia on the making of the film and the locations.The Wonderful World of “Weird Al” Yankovic Panel (1080p; 51:06): Recorded during the 2014 San Diego Comic Con, Jonah Ray interviews Yankovic on his career, and moderates a Q&A session with the audience. Fans may be disappointed that when they cut away to show “the ninth music video from Mandatory Fun,” that clip is not included (likely due to licensing issues).Behind the Scenes (480i; 3:39): Typical late 1980s EPK piece on the making of the film.Deleted Scenes (480i; 19:12): Yankovic walks the viewer through numerous sequences that were delted from the film.Music Video (480i; 4:30): The music video for the film’s title track, UHF, which allowed Yankovic the opportunity to lampoon many of the musical artists that denied him in the past, including Prince, George Michael, Robert Palmer, Billy Idol, ZZ Top, and Peter Gabriel.Production Stills (1080p): As the title suggests, this section includes 182 still photos taken during the production of the film, now in 1080p.Teaser Trailer (480i; 0:39): The film’s teaser trailer spoofs Raiders of the Lost Ark.Theatrical Trailer (1080p; 1:25): As with most trailers, this one gives away many of the film’s biggest gags, and the announcer calls the film “UHF: The Movie.”Posters and Stuff (1080p): 25 different poster and home video designs from around the world.Reversible Insert Cover: Choose between the new Shout! Factory artwork or artwork based on one of the film’s original posters.

Fans may want to hold on to their older DVD to keep the omitted Easter Eggs, otherwise this is another fine Blu-ray upgrade from Shout! Factory of a cult favorite.