Oliver Stone's describes his 1997 film U Turn as "one of my strangest" and "some people say the darkest I ever did." It is a modern, violent film noir, but Stone also calls it a "film soleil" because the exteriors are nearly all filmed on location in the harshness of the Arizona sun. This is the second Oliver Stone film to be released on Blu-ray by Twilight Time, and it boasts sterling video and audio courtesy of Sony. 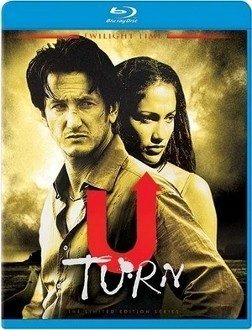 That's the difference between you and me. That's why you're living here and I'm just passing through. - Bobby Cooper

Bobby Cooper (Sean Penn) is driving his red Ford Mustang convertible on a nearly deserted, dusty Arizona road. It is morning, but the summer sun already beats down without mercy. As he drives Bobby is listening to Peggy Lee singing "It's a Good Day" on his car's AM radio. When Bobby changes stations in the middle of the song, it is an ironic portent of what is to come. We see that Bobby's left hand is bandaged and he swallows some pills from a prescription bottle while he is driving. The forbidding nature of the desert is punctuated when he passes a vulture dining on the remains of a coyote.

Suddenly, the car's radiator hose bursts and Bobby is in danger of being stranded in the middle of nowhere. He slowly proceeds to a fork in the road and he sees that the town of Superior is only three miles away, so he heads there in search of a repair shop. The engine is smoking badly as he pulls into the rundown Harlin's Garage, which is the only auto repair facility in Superior. The proprietor is a grungy mechanic named Darrell (Billy Bob Thornton), who strikes Bobby as a hayseed who doesn't sympathize with his predicament. Nevertheless, Darrell agrees to replace the radiator hose as soon as he finds a suitable one among the dozens of wrecks which are parked on the garage property. Bobby asks Darrell if there is someplace "in this dust bowl" where can get something to drink. "Well, there's a diner down there," Darrell responds. "It ain't much. Us simple folk like it, you know." But first Bobby takes a moment to grab his bag and stash a handgun in the trunk of his car.

Superior was once a prosperous mining town, but the last active mine was closed in the early 1990s. The economic fallout is evident as Bobby reaches Main Street. He engages in a somewhat surreal conversation with a blind man (Jon Voight), who sits on a bench across the street from a boarded-up hotel. Bobby then spots Grace (Jennifer Lopez), a beautiful young woman who is carrying several large packages from the bus station. He catches up to her and offers to help her with the packages, which turn out to be drapes and curtain rods. After they banter for a bit the town Sheriff, Virgil Potter (Powers Boothe), pulls up in his car and briefly engages Grace in conversation. After Sheriff Potter drives off she asks Bobby if he would like to come along to her home to help her with the drapes and have a cool drink. "You're still lucky," Bobby says to himself.

At Grace's large and impressive house Bobby takes a shower, and we learn in flashbacks how he injured his hand. He is carrying around a bag full of cash, and he is enroute to Las Vegas to pay off a debt to a loan shark. Grace alternately comes on to him and rebuffs him, and he almost walks out before finally enjoying a passionate embrace with her. Before it can go any farther they are interrupted by the unexpected appearance of Jake McKenna (Nick Nolte), who, as Bobby is surprised to learn, is Grace's much older husband. After Jake takes a swing at him, Bobby decides to walk back to Superior. Jake hops into his car and catches up to Bobby, offering him a ride. Bobby hesitates but then gets into the car, where Jake makes him an offer - he will share the life insurance proceeds with him if Bobby will agree to murder Grace.

The day continues to take strange turns. When Bobby checks on the status of his car he discovers that Darrell has removed the radiator and has taken it upon himself to do much more than simply replace the broken hose. At a cafe Bobby is served by a thin waitress with big hair who is actually named Flo (Julie Haggerty). While in the cafe Bobby is approached by a flirtatious teenager named Jenny (Claire Danes), which is not appreciated by her hot-headed boyfriend, Toby N. Tucker (Joaquin Phoenix), who is nicknamed "T.N.T." because of his explosive temperament.

In the grand tradition of film noir, nothing in U Turn is exactly as it first seems. When I first saw the film in a theater I thought that there were actually too many twists and turns in the plot, but upon second viewing I have come to appreciate the film more. Oliver Stone's approach is highly stylized, as he occasionally inserts extreme camera angles and momentary flashbacks with unusual imagery. The impressive actors in the cast turn in uniformly excellent performances. The script by John Ridley, which is based upon his novel "Stray Dogs," is replete with sharp and witty dialogue which at times plays like black comedy. Stone made U Turn at an admittedly low point in his life, and he acknowledges that the overall theme of the film is one of despair. U Turn clearly is not everyone's cup of tea - critics were all over the map on this film - but it is impressive filmmaking and is a worthwhile addition to Twilight Time's library of films on Blu-ray.

The 1080p image is correctly framed at 1.85:1 image and is encoded with the AVC codec. The cinematography by Robert Richardson has a deliberately harsh and glaring look to it. This Blu-ray is highly detailed, with accurate colors, strong contrast, inky blacks and excellent shadow detail. Film grain has been retained and the print is pristine.

Fans of the film who would like to see what some of the film's locations look like now can find photographs at Then & Now Movie Locations. Economic conditions in Surprise have apparently gotten worse since 1997.

The English 5.1 DTS HD-MA audio is excellent throughout. Dialogue is clear and understandable, and the surround channels are given plenty to do in the film's violent scenes, virtually enveloping the viewer in the action. The fine score by Ennio Morricone is supplemented by an eclectic selection of popular songs, and all of the music is given a wide and pleasing soundstage. English SDH subtitles are available

The special features on this Blu-ray release include a new introduction of the film by Oliver Stone. While the introduction is very interesting, I recommend that you do not view it until after watching the feature because it contains several spoilers.

Viewers are provided with two audio commentary tracks, one by Oliver Store and the other by producer Mike Medavoy and Twilight Time's Nick Redman. Both commentaries are worthwhile.

As usual, Twilight Time has included an isolated score track, which includes both Ennio Morricone's score and the various pop and country tunes which are referenced above.

An eight-page illustrated booklet contains an insightful and informative essay about U Turn by film historian Julie Kirgo.

U Turn is not for every taste (and some film critics found it to be decidedly distasteful), but it is a fascinating film which has been given first-class Blu-ray treatment by Sony and Twilight Time. It has been released in a limited edition of 3,000 copies, so readers interested in purchasing it should go to the Screen Archives websiteand confirm that copies are still available.

I love the movie. It's great that TT picked it up because, much like Criterion, they lend class to a title.

I also love the film and this comes from a period in Stone's career where he still seemed full of fire and energy and probably an over abundance of style...even though he seemed to be in some personal turmoil at the time of making this one. His more recent films seem toned down...more reserved and I miss the Oliver Stone whose films were more colorful and explosive than an inferno at a fireworks factory.


It is also a very cool excursion into Noir territory that features some fun turns by a group of great actors. I've always felt Sean Penn would make an excellent presence in Noir style films and here he proves it in spades. It just seems that this film has already become a relic because nobody, not even Stone himself, seems interested in turning out films this vivid anymore. Maybe Tarantino aims for this level of manic intensity but does not really hit the same notes Stone did when firing on all cylinders. Plus Tarantino seems to dwell in the land of candy colored tributes to his pop culture touchstones more than the ramped-up paranoia, "are we losing our minds" social commentary you get in an Oliver Stone production.


Great movie and thank you for the review.

I will jump on the love bandwagon. I think the film was brutally attacked by critics for no reason other than they wanted to attack some more after NATURAL BORN KILLERS. The cast is simply wonderful, the twists are nice and it's just a fun movie.
You must log in or register to reply here.