Nathaniel Hawthorne may have written classic novels some folks felt forced to read in high school (was I alone in liking The Scarlet Letter?), but he also was a great purveyor of eerie and unusual short tales (some of which were also required reading in high school and college). In Sidney Salkow’s Twice Told Tales, three of Hawthorne’s most famous stories have received rather loose adaptations into an anthology film that may be fairly far from Hawthorne but is nevertheless most entertaining. The new Blu-ray release of this 1963 movie is a beauty. 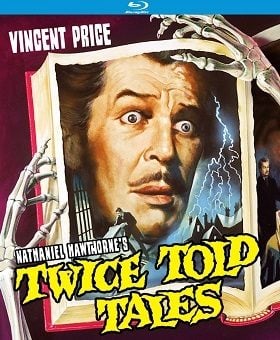 The film begins with the most conventional of the supernatural tales “Dr. Heidegger's Experiment” which finds two old, close friends Dr. Carl Heidigger (Sebastian Cabot) and Alex Medbourne (Vincent Price) stumbling across a fountain of youth liquid dripping onto the casket of Heidigger’s long dead fiancé Sylvia Ward (Mari Blanchard) restoring what should have been a rotted corpse into a vital, living, flesh and blood person again. Drinking some of the rejuvenating water likewise returns them to their youthful presences from forty years previous whereupon some surprising details of their lives from four decades ago come to light. The surprise twist here isn’t so surprising (the adaptation of this and the other tales is by Robert E. Kent who also produced the picture), and director Sidney Salkow has sloppily framed the action so we see actress Mari Blanchard alive and breathing before her character has been brought back to life making things appear a trifle amateurish. Still the time-lapse photography to take years off of the two leading men is accomplished quite nicely, and one dazzling pan cut to Sylvia once the effects of the potion wear off is one of the best things in the movie.

“Rappaccini's Daughter” is the closest of the three stories to the original Hawthorne tale, a saga of a cuckolded husband (Vincent Price) making sure his daughter Beatrice (Joyce Taylor) is spared any infidelity in her life by replacing her blood with the poisonous properties of a special plant that acts as an acid to any who touch her. This makes things difficult when a science student Giovanni Guasconti (Brett Halsey) glimpses Beatrice in her garden and falls instantly in love with her. The embittered father blocking his daughter’s chances for happiness suggests any number of thwarted youthful love scenarios throughout literature (several in Shakespeare, for example), and the story develops quite interestingly and is acted very well by the trio of leads. Abraham Sofaer also merits special mention for his performance as Professor Pietro Baglioni who attempts to find an antidote so the lovers can eventually be together.

“The House of the Seven Gables” goes rather far afield from the Hawthorne novel from which it’s adapted, but some family names and situations still reflect the source book though the screenwriter has added the heavy supernatural elements to dominate this version of the story (Vincent Price co-starred in a different role in the 1940 film version of the novel). Here it’s a ghost tale with the spirit of dead Matthew Maulle (Floyd Simmons) claiming every male heir of the Pyncheon family who tries to inhabit the ancestral manse. The latest is Gerald Pyncheon (Vincent Price) who arrives with new wife Alice (Beverly Garland) who seems to have some kind of strange but bewildering (to her) kinship to the structure. Maulle ancestor Jonathan (Richard Denning) arrives and is bewitched by Alice, the spitting image of the woman whom his ancestor Matthew had loved and lost, but he refuses to reveal to Gerald the location of a hidden vault which will contain riches enough to sustain him for the rest of his days. Production values certainly are the grandest in this last of the trio of tales (though all of the dripping blood from paintings, walls, and ceilings looks more like red paint than blood), and the three stars along with Jacqueline deWit as Gerald’s spiteful sister Hannah all do quite well. There are some continuity problems (blood on the upholstery of a chair appears and disappears with no explanation), and the otherworldly elements aren’t as frightening as perhaps they were meant to be (Price really has to act his head off being strangled by a detached skeletal arm and hand), but it brings the relatively classy production to a satisfying conclusion.

The movie is framed on this release at 1.66:1 and is presented in 1080p resolution using the AVC codec. For the most part, it’s a stunning transfer with gorgeous picture quality, exceptional sharpness, and spot-on color resolution with accurate and appealing skin tones. Black levels are rich and inky, and contrast has been dialed in to perfection and sustains itself consistently. The only problems are those stray dust specks which are few and far between but very noticeable when they do occur. Otherwise, this one is top-notch. The movie has been divided into 8 chapters.

The DTS-HD Master Audio 2.0 mono audio mix sounds as one would expect for a production from this era. The dialogue has been professionally recorded and is always clearly presented, mixed thoughtfully with the background score and the atmospheric effects for the film. In the quieter moments, you will be able to hear some soft hiss a few times and a slight bit of crackle at one key moment, but for the most part the age-related anomalies are not jarring to the listener.

Audio Commentary: film historians Richard Harland Smith and Perry Martin contribute a crammed-to-the-rafters commentary track with everything you’ve ever wanted to know about the film, its cast and crew, the original Hawthorne stories, and many references to films and television series with similar themes or in which the stars here participated. It’s an exceptionally good if exhausting listen and a useful reference source.

Trailers from Hell (3:04. HD): a brief video essay on the movie by director Mick Garris.

Fans of Twice Told Tales will be delighted by the excellent high definition transfer that’s offered here. While Vincent Price fans will likely prefer some of his Poe adaptations over this Hawthorne-generated trilogy of tales, it’s still a movie that’s well worth watching. Recommended!

I can't remember seeing this so have ordered the blu-ray - glad it's a good one!

Very happy to hear this is so good. On my list.
You must log in or register to reply here.