Triumph of the Will Blu-ray Review

Unquestionably the most infamous propaganda film ever produced, Leni Riefenstahl’s Triumph of the Will is nevertheless a tremendous logistical and commercial accomplishment. Covering many of the events in a weeklong celebration of the Third Reich’s first anniversary in power, Triumph of the Will captures the fervor and pride of a people emerging from more than a decade of postwar emotional and fiscal depression celebrating their country’s growing might in visuals emphasizing order, discipline, strength, and obeisance. In hindsight, we can see many haunting, ghastly, or ironic images of people and places which a dozen years later wouldn’t be as they’re seen here, but that only gives the film an additional layer of emotional depth and intensity that makes return trips to this revivalist Nuremberg rally well worth experiencing. 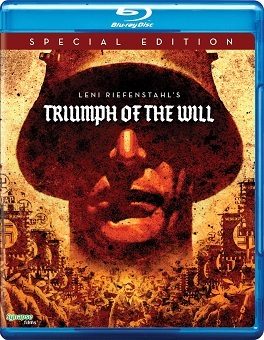 Commissioned by the Nazi propaganda minister Josef Goebbels to record the September 4-10, 1934 Reich Party Rally held in Nuremberg, Leni Riefenstahl and her more than one hundred assistants and thirty cameras recorded many of the highlights of the six-day convention. Beginning with Hitler’s descent from the clouds which opens the movie (one of many attempts to deify the new Führer whose party had been elected to power in 1933), the movie bends over backwards to convey the new leader’s forceful, powerful presence in all of the episodes in which he presides. There are several parades in which various divisions of the party show off for their leader, sometimes in daylight pageantry (the Hitler Youth, the Labor Party) and sometimes in torchlight celebrations (the assuring of the recently purged SA that they would continue to flourish in the new state and that they had his complete trust, though, of course, by then it was clear that the more newly christened SS would become Hitler’s elite and preferred guard).

Throughout the various parades, celebrations, and speeches (which emphasize bright, smiling faces of youth who we know ten years later would be immersed in a bloody, rapacious war and the strength and unanimity of the people seen in the graphic, uniform congregations of the public whether they be troops or spectators), images of infamous Nazi leaders appear before us: Heinrich Himmler, Hermann Göring, Rudolf Hess, Josef Goebbels. There is a sequence where small excerpts from speeches by these and other various leaders of the party’s divisions make clear their own agendas: the need for racial purity, the greatness of their past to be reflected in the greatness to come on the horizon, the strength of youth to take the reins one day from the present generation, the end of class status and the celebration of the ordinary worker toward a strong, cohesive Germany. But above all, the speeches all revolve around the film’s overriding theme: unity in thought and action and complete faith and support to their newly appointed leader Adolf Hitler after the death (which is commemorated in a couple of occasions) of General von Hindenburg.

Director Riefenstahl has been careful that the word “Nazi” never is uttered or viewed in the film (this is the National Socialist German Workers Party Day celebration), and images often focus on the plentiful food and drink available during this celebration (while much of the rest of the world was still in the midst of the Great Depression). But the Führer’s several speeches during this week of celebration are all carefully captured, often filming him from below to add to the power of his countenance while continual echoes of applause and chanting intercut with adoring crowds hanging on his every word add to the effect that his somewhat repetitive oratory is instead flawless, well -crafted political prose. She also makes sure that camera angles for the various parades and rallies vary from long shots that capture the size and masterful exhibition of German manpower and determination (that sea of flags sequence still looks impressive even in an age of immense movie spectacles) to closer angles that offer a more personal involvement with the speakers and their audience.

The film is framed at its original 1.19:1 theatrical aspect ratio and is presented in 1080p using the AVC codec. Restorationist Greg Kimble under the supervision of Robert A. Harris has done a magnificent job bringing this battered 1935 film into the high definition age. While there is certainly notable evidence where digital work was needed and carried out, the results are pretty seamless, and no major anomalies like huge scratches or emulsion damage remain to mar the viewing experience. While the black levels in the grayscale aren’t the deepest you’ll ever see, it’s remarkable they can get as deep as they do, and whites are clean and crisp. The film has been divided into 18 chapters.

The DTS-HD Master Audio 2.0 German mono track has been cleaned up as much as possible while retaining the era’s often reedy and narrow sound range. While most of the expected audio problems for a film of this age are not present, you’ll still hear a little light hiss in some quieter passages, a thump or two here and there, and a little distortion on occasion. On the whole, it’s better than it has any right to be.

Audio Commentary: Dr. Anthony R. Santoro offers a historically interesting commentary while also describing much too often what we’re actually seeing on the screen. From his descriptions, however, come many fascinating kernels of information (especially in identifying the many German cabinet ministers we see in passing and their ultimate fates by the end of the war), so one must endure one to be able to enjoy the other.

Day of Freedom (17:02, HD): Leni Riefenstahl’s 1936 short film follow-up to Triumph of the Will offering the German military (their segment in the 1935 film ran only a few minutes and was the cause of much grumbling) a chance to shine in some staged military maneuvers with their artillery and showing the Luftwaffe in action.

Enclosed Liner Notes Booklet: film writer Roy Frumkes offers a fascinating essay on the film and its relation to history that should be required reading for scholars of the film of this period in history.

Highly Recommended! Triumph of the Will makes for a compelling and historically significant chapter in the history of Germany between the world wars, and its newly released high definition treatment offers the film in its best-ever state for viewing.

Saw this a few months ago with the audio commentary and what a learning experience on what the key members of the Nazi party did before, during, and after the war. I also agree that it's the most infamous propaganda film ever produced!
C


huh? No she was never "careful" of that. The word "Nazi" is an allied fabrication. It is/was a short way of saying "Nationalsozialistische Deutsche Arbeiterpartei"


The Germans at the time never used that word period.

Tag Der Freiheit:Unsere Wehrmacht had been lost since the end of the war and an incomplete print was found about 30 years later. About 20 mins is missing.

huh? No she was never "careful" of that. The word "Nazi" is an allied fabrication. It is/was a short way of saying "Nationalsozialistische Deutsche Arbeiterpartei"

The Germans at the time never used that word period.

I corrected you at the other thread.
C

Right I said just that. But Germans of the time never used that word it was made up by the allies.

The term is a composite word made up from the following German words: Nazionalsozialistische Deutsche Arbeiterpartei. Translation National Socialist German Workers Party. Or NSDAP as an abbreviation. The Party is always referred to by Hitler as "The Movement," Der Bewegung" in German. The word "Nazi" is a contraction of the long German name for the Party, and Hitler and the Nazis did not favor its use or ever use it. Here is how it evolved from the long German name of the Party: Nazionalsozialistische Deutsche Arbeiterpartei. It was a nickname given to the Party by its enemies, domestic and foreign. Of course, worldwide, the term Nazi or Nazis is in common use and has been from the beginning.


I never heard the term Nazi used to describe the NSDAP, only the people:

The party = NSDAP or the long name.


At least here in Germany.
C


I never heard the term Nazi used to describe the NSDAP, only the people:

The party = NSDAP or the long name.

Whether or not it's correct terminology, I believe believe use the term "Nazi" interchangeably be it to describe National Socialists or the NSDAP

We are getting off-track, folks. Back to a discussion of the film please.

Recomend the great documentary The Wonderful, Horrible Life of Leni Riefenstahl (1993) in which she talks about this film and Olympia (1938) and why she did the films during that time in Germany.

Black instead of blue is MUCH appreciated.
P

A crucial piece of world history, to say the least; and it's all there on film.

Kudos to Mr. Greg Kimbal for undertaking this important restoration.

I saw a 16mm print of this in a German history class back in 1989, without subtitles, with full knowledge of Nazi atrocities and Hitler's world view, without any knowledge of German (beyond Hogan's Heroes) as a language--and I still felt a momentary impulse to "get up and cheer". I can only imagine the power of this film to its intended audience. I will add this to my collection of films for use in classes I teach, without question. It is, along with The Birth of a Nation, an excellent demonstration of the power of high quality filming techniques married to disturbing propaganda and ideology. A lesson worth learning and passing on.

Paul, I had the same reaction (scary, isn't it?) when I saw this, also w/o subtitles, at MoMA, in their archive 35mm print. The power of the image in propaganda is indeed impressive.
You must log in or register to reply here.