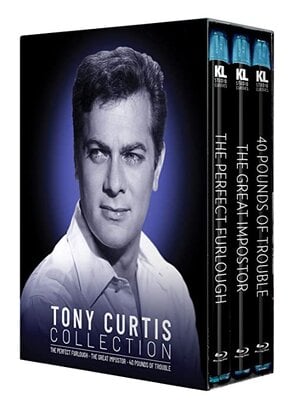 I'll be buying this 3-movie release even though "The Great Imposter" is the one title I really want of the three.
Reactions: haineshisway and Peter M Fitzgerald

I have a nostalgic interest in 40 Pounds of Trouble. I was 8 or 9, in the middle of New York State, and it's the only time my mother and I went to town and spent the day together. We went shopping, ate out, and then went to a double feature and then had a snack while waiting for my father to pick us up. As a kid I was really fascinated watching all the scenes filmed in Disneyland! I rarely got to go to films. A few years ago I watched it again and the Disneyland scenes are fascinating from a vintage viewpoint; how much it's changed. There's a lot of Cold War humor in the film, too. Curtis and Suzanne Pleshette are very appealing. AN ASIDE: I was allowed to pick whatever movie I wanted to go see and looking at the ads in the newspaper I really wanted to see Tom Jones. Heh! My mother somehow wisely talked me out of it, an 8-9 year old would not have enjoyed that one.

The other film on the double feature was The Brass Bottle. Tony Randall finds a genie in a bottle. Burl Ives. Barbara Eden is in it, too, though I don't think she played a genie in it. But she would for the next six years.
Reactions: RBailey and Brent Reid
You must log in or register to reply here.