One of the most famous Japanese films ever made and one of the most revered films in international cinema, Yasujiro Ozu’s Tokyo Story is perhaps the director’s greatest drama portraying in his legendary style the domestic dynamic between parents and children that has become the norm not just in Japanese society but in many parts of the civilized world. Paced in the measured cadences for which the director is known, Tokyo Story exerts the kind of truthful magnetism that is impossible to both resist and forget. 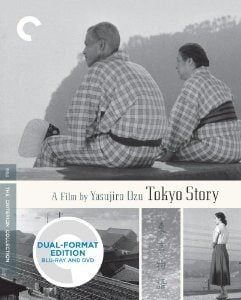 book-like holder inside a slipcase

Elderly parents Shukichi (Chishu Ryu) and Tomi Hirayama (Chieko Higashiyama) take a long train journey to visit their children most of whom live in Tokyo and whom they haven't seen in quite a while. Their doctor son Koichi (So Yamamura) and beautician daughter Shige (Haruko Sugimura) are busy with their own lives and find every excuse they can to cut short their visit eventually sending them to a noisy hot springs spa at Atami just to get them out of their hair. The one family member who treats them with respect and attention is their daughter-in-law Noriko (Setsuko Hara) who had been married unhappily to their now deceased son but who feels closer to them than their blood relations. So busy are they all that no one notices that Tomi has been having dizzy spells and memory lapses during the trip signaling that something might be seriously wrong with her.The ever-widening generation gap is the focus of Ozu and Kogo Noda’s screenplay (even more distant is the relationship between Tomi and Shukichi and their grandchildren who really don’t want to be around the older couple unless there is some kind of outing involved), and the couple expresses their disappointment in their children during more than one interchange between themselves. (Those familiar with Leo McCarey’s Make Way for Tomorrow will notice a similar theme between the movies though McCarey’s film is more melodramatic.) Ozu films his scenes with his usual steady camera with very little movement from it thus allowing the viewer to soak in the body language and the verbal cues to everyone’s real feelings about one another. Nothing is ever rushed about the movie: the arrival dinner where the selfish Shige resents serving two meat dishes to her parents, a drunken night on the town for Shukichi as the old men present each lament their children’s failures, the terrible sleepless night for the elderly couple at the spa as the younger people there have their revelries, the climactic funeral. Ozu offers such a rich, emotional tapestry in the movie, but he makes viewers work for their rewards: nothing is ever over-enunciated or hammered home in cinematic terms.And the performances are so real and true that they really don’t seem like acting from any of these players, many of whom had appeared in handfuls of Ozu productions. The three top-billed actors: Chishu Ryu, Hieko Higashiyama, and Setsuko Hara give devastatingly complex performances as the father, mother, and daughter-in-law, Hara’s breakdown near the end being one of the most heartbreaking moments in all of cinema. So Yamamura and Haruko Sugimura as the selfish son and daughter have more traditionally one-note characters but are nevertheless fascinating in their crass self-centeredness and egotism. Kyoko Kagawa as the youngest daughter, a schoolteacher still living at home with her parents, also offers some touching moments on both ends of the film.

The film is presented in its theatrical 1.33:1 aspect ratio and is offered in 1080p resolution using the AVC codec. Sharpness is mostly quite good throughout the presentation, and the transfer is not mottled by age-related scratches, debris, or damage. There is a fair amount of line twitter in those wooden-laced structures which populate the film, and there is some aliasing to be seen in some occasional shots as well. There is also some contouring of a kind in the sky backgrounds, and while the grayscale is pleasing, the black levels are certainly not of reference quality. The white subtitles are very easy to read. The film has been divided into 26 chapters.

The PCM 1.0 (1.1 Mbps) sound mix is very much a product of its age with very little on the low end in the mix and obvious ADR. While the Japanese dialogue is clean and sound effects and music don’t overpower it on any occasion, there is some soft hiss present that can be heard during quieter scenes.

Audio Commentary: film historian David Desser brings a very scholarly knowledge of Ozu’s oeuvre to his engaging and informative commentary track.Talking with Ozu (39:33, HD): filmmakers around the globe comment on their first experiences with an Ozu film and what his work has meant to them in their own projects. This 1993 documentary was commissioned by Ozu’s home studio Shochiku on his 90th anniversary year, thirty years after this death in 1963.I Lived, But… (2:02:48, HD): a 1983 biographical and occupational documentary featuring friends, family, and collaborators of Ozu who reminisce about his life and work with many clips from his silent and sound films which stretched from 1927-1963.Chishu Ryu and Shochiku’s Ofuna Studios (45:09, HD): Japan’s (then) oldest still-working actor who appeared in literally all of Ozu’s films and whose career paralleled the construction and utilization of the Ofuna Studios is interviewed in this 1988 documentary as he recalls experiences working at the studio as several major buildings are being torn down for its latest renovations.Theatrical Trailer (4:20, HD)Fourteen-Page Booklet: contains the chapter listing, the cast and crew lists, a selection of stills from the movie, and film critic David Bordwell’s analysis of the movie.Timeline: can be pulled up from the menu or by pushing the red button on the remote. It shows you your progress on the disc, the title of the chapter you’re now in, and index markers for the commentary that goes along with the film, all of which can be switched on the fly. Additionally, two other buttons on the remote can place or remove bookmarks if you decide to stop viewing before reaching the end of the film or want to mark specific places for later reference.DVDs: the film and a separate disc of its bonus features are also included

Highly Recommended! Yasujiro Ozu’s Tokyo Story contains the distillation of everything about the filmmaker that made him one of international cinema’s most brilliant and admired talents. With the best-ever home video release and a rich, comprehensive selection of bonus material, this package would be very hard to beat.

All ready had this on pre-order, thanks for confirming it's another good job from Criterion! Look forward to seeing it for the first time

3.5/5 3.5/5 How strong is your recommendation for someone who already has the DVD? With the two 3.5s I'm reading it as marginal.

I can't answer because I didn't have the DVDs.

Depends which DVD you got. An early in the beginning of DVD itself...or a later redo.I have a feeling, without the frame of reference, this deserves a 4.2.

By the way, screen shots I've seen put this around 90% of the quality of Naked Island.So, I have no clue how it gets a 3.5.

Matt Hough said:
I can't answer because I didn't have the DVDs.
Click to expand...

I inferred from your review that DVDs came with the package. (but probably you don't have time to watch the DVD to compare it to the Blu so I'll just use my best judgment and wait until I have more discretionary income)

Especially with Black Friday coming up and my inability to be moderate in my purchasing ability.

schan1269 said:
Depends which DVD you got. An early in the beginning of DVD itself...or a later redo.I have a feeling, without the frame of reference, this deserves a 4.2.
Click to expand...

I got it during a B&N sale earlier this year so presumably it's a later redo.

When I got home last night, I got out my German R2 DVD(had the best English subtitles at the time...from 6 years ago??). I have a DVD and the BD of Naked Island.Set up two computers (this theater has a permanent one), two DVD players(set 480p and already have two anyway for region free and Hi-Res. Swapped DVDs to check for variance) and BD player through my NR1008(set it through so the Hitachi itself was scaling the DVDs)Using the screenshots(from two different sites) of Tokyo Story/Naked Island to compare them to each other...and to the BD itself of NC...The BD of Tokyo Story blows away my R2 DVD.

sidburyjr said:
I inferred from your review that DVDs came with the package. (but probably you don't have time to watch the DVD to compare it to the Blu so I'll just use my best judgment and wait until I have more discretionary income)

Especially with Black Friday coming up and my inability to be moderate in my purchasing ability.
Click to expand...

Of course they do. I believe it was the earlier DVD release that was being referenced. I truly don't have time to do A/B comparisons in these dual-format releases since the DVDs in this package are from the latest high def scan down rezzed for DVD.

Matt, I don't have issue with your review, other than the 3.5 video. I am an aficionado of b/w Japanese theater. Sincerely this disc is not a 3.5. If you see softness with gray instead of sharp and black.That is quintessential Japanese high art of cinema.

I saw the 4K remastered version of this - an undisputed masterpiece and absolutely a candidate for one of the greatest movies of all time - at the arthouse cinema in Oslo last year. The picture quality is noticeably superior to the Criterion - better resolved film grain, which is typical for 4K remasters. The caps give a fair representation.

The BFI has released an inexpensive, region B-locked version of this 4K remastered version. I highly recommend it. 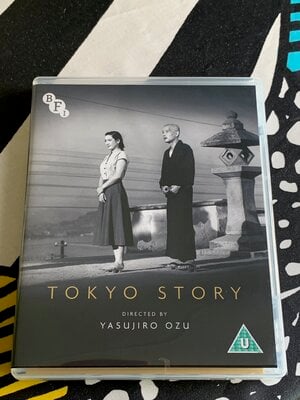 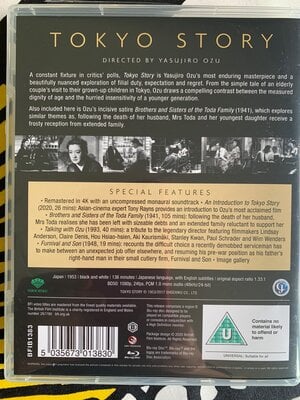 It's one of my favorites by the great director and want to buy it but not at Amazon UK. The shipping charges are more than the cost of the Blu-ray! Will have to look somewhere else to buy it.

atcolomb said:
It's one of my favorites by the great director and want to buy it but not at Amazon UK. The shipping charges are more than the cost of the Blu-ray! Will have to look somewhere else to buy it.
Click to expand...

Yes - the current pandemic has made shipping over the pond extremely expensive. If I order from Amazon US, I have to pay a minimum of $35 shipping + import taxes. This means I have to bulk-buy my movies from the US every three months, or so. Maybe put Tokyo Story on your "wanted" list and pull the trigger when there are five other region B titles you want? I can heartily recommend the BFI Cyrano de Bergerac, Fellini I Vitelloni, Studiocanal's Last Year In Marianbad and Essential Godard Collection!

I have Studio Canal's release of Last Year in Marianbad and thought it was a good transfer. A seller on Ebay currently has the new release of Tokyo Story for $22.94 free shipping but it might be a long wait to get it here in the states since the seller is in the UK.
You must log in or register to reply here.