International To My Eyes...DAY OF THE JACKAL (1973) on Blu from the UK 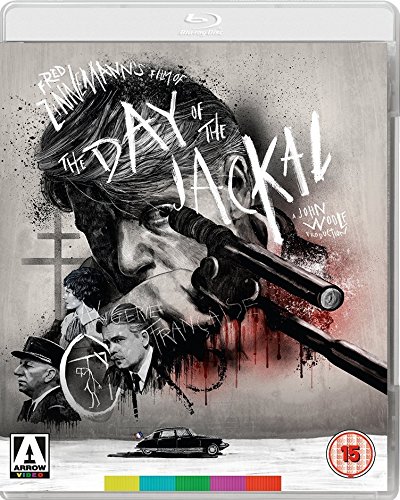 It's taken me half my lifetime to warm up to this film, and I'm not sure why. Watching my recently-acquired Blu from UK, I have decided I really like it, and find it to be one of director Fred Zinneman's best films. Possibly this is because I have previously only seen sub-standard home video copies. Arrow/Universal fixes that.

This time around, I found myself saying out loud, "Oh, there's Michel Lonsdale (as Michael Lonsdale in MOONRAKER). Yeah, Cyril Cusack (FAHRENHEIT 451). And, wow...that's Derek Jacobi (HENRY V). And Donald Sinden (ISLAND AT THE TOP OF THE WORLD). At the very end, there is an all-too-brief (and uncredited) appearance by a very young Edward Hardwick (Dr. Watson in the SHERLOCK HOLMES BBC series).

This film has a remarkable cast.

The plot is fictitious, but supposes that a hired killer (Edward Fox) has been commissioned to assassinate French President Charles de Gaulle, whom an underground opposition movement believes has jeopardized their country's national security by granting independence to Algeria. What transpires here is a wonderfully suspenseful cross-cutting between three factions: the sociopathic killer himself as he methodically prepares for his hit, the OAS movement that contracted him, and the police procedural that desperately tries to learn of the assassin's identify and stop him from murdering the president. The film is 143 minutes long, but the pacing seems perfect to me now, and I wasn't bored for a second this time around.

Arrow might or might not get around to releasing this Universal title in the U.S. So, far, it isn't looking promising. But for those with a region-free player, all is well.

The transfer looks terrific to my eyes. At first, sitting back a bit from the screen, I thought Universal had scrubbed away all the grain a la the first Blu release of SPARTACUS, but moving closer, I see that is not the case. Often very fine - but visible - grain in many shots alternates with those in which it is slightly more pronounced, but never bothersome. The color looks pitch-perfect, with very strong reds and greens. Flesh tones are just fine. The contrast, black levels and shadow detail (although the whole film pretty much takes place in daylight) are more than acceptable to me. The sound is uncompressed 1.0 mono and is just fine for this film. Aspect ratio is 1.85:1 English subtitles are available.

Extras on the disc include an interview with the author of Fred Zinneman: Films of Character and Conscience. There are brief clips from the film set, including a 2-minute interview with Zinneman. Best of all is a beautifully-designed, profusely illustrated, 32-page booklet with an informative essay by Mark Cunliffe. The cover art is reversible, but I prefer the side that was chosen as the default.

I have the Australian disc which is pretty good without being excellent. Does the slip case of your disc give any details about the date of the scan etc.?

Robin9 said:
I have the Australian disc which is pretty good without being excellent. Does the slip case of your disc give any details about the date of the scan etc.?
Click to expand...

The back page of the booklet says:

"About the transfer: A 35mm interpositive was sourced for the picture, and a 35mm duplicate optical sound negative master was sourced for the audio. The film was remastered by NBC Universal. Additional picture restoration work was performed at R3store Studios."

There is no information revealing when the latest scan was made, but this was a 2017 Blu-ray from Arrow.
Reactions: Jack K

The Australian disc gives no details at all, but it too is a 2017 disc so probably the transfer is the same.​
Last edited: Feb 3, 2018

This UK Arrow release was released on September 4th, I received it on September 13th and immediately watched it. My posted comments were the following:

I just got done viewing the Arrow BD release of The Day of the Jackal. I was just going to sample this Blu-ray to see if it was region locked and surprise, surprise, I ended up watching the entire film. Much improvement over the DVD. One caveat that unlike Ronin or The Big Knife, this UK Arrow release is Region B locked.
Click to expand...

For what it's worth, I was satisfied with the Australian disc:

Arrow's is certainly a good disc...but in high resolution you can all too clearly see rain coming off a darkened windowsill at a key moment at the end, the kind of error (it's otherwise a dry, sunlit afternoon) that takes you right out of the movie if you notice it. A great film but a serious flub, the kind of thing filmmakers hoped would pass unnoticed in the pre-video era.

I haven't got around to buying the Arrow yet. It's been on TV in HD a few times & looks very nice...except for a super dirty picture, it's covered in marks, but I understand that Arrow has given the picture a clean-up, so I will buy it some time this year.
D

Josh Steinberg said:
For what it's worth, I was satisfied with the Australian disc: