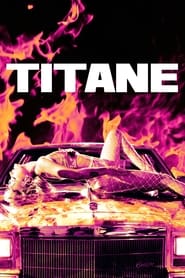 Plot: A woman with a metal plate in her head from a childhood car accident embarks on a bizarre journey, bringing her into contact with a firefighter who's reunited with his missing son after 10 years.
TITANE (2021) - Not since David Cronenberg's CRASH has Cannes seen as 'auto'-erotic a film as Julie Doucurnau's TITANE. And, despite some controversy with each, both movies got Jury Awards (TITANE the Palme D'or).


After a childhood flashback leaves Alexia (played as an adult by Agathe Rousselle) with a metal plate in her head. The 30ish woman is now a dancer at a strip club where the ladies gyrate with automobiles (and, if there's something that eclipses a man's fancy more than girls and cars - it's girls AND cars). A bizarre late night S&M encounter leaves Alexia pregnant -- and with an increasing penchant for violence and aggression. Doucurnau (RAW) doesn't flinch from showing the sex and brutality in all it's grindhouse glory. The movie provocatively begs the question of whether it's any less exploitative if it's directed by a woman.

After this savage (overly so) opening*, Doucurnau's script (with “consultants”) abruptly changes gear when Alexia comes into contact with Vincent (Vincent Lindon), a fire chief of a special fire fighting unit. He takes Alexia under his protection and becomes a father figure to her. Vincent has severe issues of his own, and their relationship becomes a symbiotic one, however peculiar it may be. Rousselle and Lindon play off each other well here and their bond becomes as believable as this strange tale can become. More to the point, it becomes quite moving in its own perverse manner.

Doucurnau's movie isn't just interested in the standard horror tropes, as it confronts head on gender identity, sadomasochistic relationships and the fetishizing of women's bodies. Genre fans will see parallels to such earlier films such as Cronenberg's THE BROOD, DEAD RINGERS and RABID (along with the aforementioned CRASH). BLADE RUNNER 2049, UNDER THE SKIN, THE DEMON SEED and last year's PROMISING YOUNG WOMAN are also evoked (the latter, of course, a coincidence of timing).

TITANE is certainly not your typical Cannes Awards winner, nor your standard horror film, but Doucurnau has created her own disturbing vision of the intersection of sexual politics and what it means to be human in this age of rapidly accelerting advances in bio-medical technology.

*there were walkouts in the theater

I noticed today this is playing at the local art house theater.
J

Malcolm R said:
I noticed today this is playing at the local art house theater.
Click to expand...

You have been duly warned.

The US blu-ray is absolutely worth getting. Don't listen to Brian Orndorf - he's obviously watching his films on a poorly calibrated monitor. The picture looks every bit as good projected on my screen, as it did in the theatre - a bit of banding aside. If you have a good sound system, your subwoofers will shake your foundations. The craziest film I've seen for a long while - it could only be French! And the second amazing birth scene in a week, after Annette! 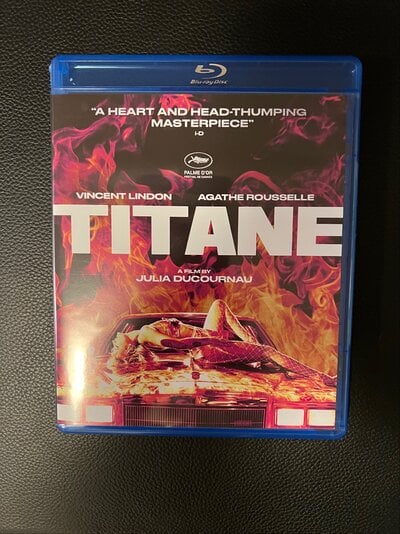