Tinker Bell and the Legend of the Neverbeast Blu-ray Review

Tinker Bell has strangely become a supporting character in her own movie franchise proven yet again in Tinker Bell and the Legend of the Neverbeast. She’s around, of course, to offer help and advice, but the focus falls on another of her friends, and the adventure she experiences with the other residents of Pixie Hollow might be a bit predictable for adults, but it’s loaded with good intentions and a surprising amount of emotion. Be ready to shed a few tears as the film draws to its bittersweet conclusion. 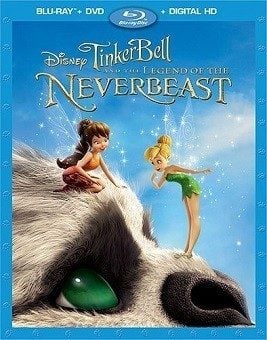 One of Tinker Bell’s (Mae Whitman) closest friends the animal fairy Fawn (Ginnifer Goodwin) is continually getting into trouble in Pixie Hollow for her big heart that takes in wounded creatures who might serve as a danger to the other residents of the valley. After receiving a stern lecture from Queen Clarion (Anjelica Huston) about thinking with her head before acting with her heart, Fawn befriends an injured monster-like creature she dubs “Gruff.” Keeping his discovery a secret from everyone (even against her own conscience), she learns that the creature is a Neverbeast, awakened every 1,000 years by a passing comet that sets up a series of electrical disturbances which the beast somehow becomes the catalyst for. The Queen orders the warrior scouts led by Nyx (Rosario Dawson) to destroy the beast since it appears the beast has the power to incinerate everything once the lightning storm happens, but Fawn is determined to prove that the beast isn’t the danger everyone thinks it is.

The story by director Steve Loter and Tom Rogers (who collaborated on the screenplay with Robert Schooley, Mark McCorkle, and Kate Kondell) offers younger viewers some wonderful life lessons about not making snap judgments based on first impressions and the power of a loving heart on someone who’s confused or defiant, and the film’s relatively brief running time manages to offer several montages featuring Fawn helping Gruff with his inbred task of erecting four towers as well as an exciting hawk attack sequence in the early going and the climactic apocalypse where for a brief second it seems as if tragedy has occurred. While the Disneytoons animation won’t be giving Pixar, Walt Disney Animation, or DreamWorks artists any sleepless nights, it’s colorful and detailed enough to satisfy undiscriminating viewers and squeezes every ounce of emotion out of its ending which shows the immense power of a loving bond while three pop tunes (“Float,” “Strange Sights,” and the evocative “1,000”) written expressly for the film provide expressive musical commentary to enhance the visuals.

Ginnifer Goodwin does a fine job as the spunky Fawn endearing herself to the viewer with her good intentions and sometimes reckless decision making. Rosario Dawson as the earnest, determined warrior scout Nyx provides a great foil for Goodwin’s sprightlier Fawn, and the two have some excellent face-to-face encounters as they battle for control of the Neverbeast’s future. Mae Whitman is as effective as always as Tinker Bell even with less to do in this outing, and her friends played again by Lucy Liu, Raven-Symone, Megan Hilty, and Pamela Adlon are all enjoyable in their limited capacities this time out. Anjelica Huston continues majestically as Queen Clarion. Thomas Lennon as the nerdy Hollow librarian and Jeff Corwin as an animal expert (as he is in real life) are quite effective and could have done with more expanded scenes.

The framing for this home video is 1.78:1 and is presented in 1080p resolution using the AVC codec. Everything is aces this time out with sharpness and color control reference quality from start to finish. Black levels are wonderful, and contrast has been applied consistently. There is no blooming in the color and no banding in the transfer. The movie has been divided into 16 chapters.

The DTS-HD Master Audio 7.1 sound mix may not use all of the available channels to completely envelop the viewer in sound, but it comes very close. Dialogue has been masterfully recorded and has been placed in the center channel. The songs and background score by Joel McNeely get an excellent spread through the fronts and rears. Sound effects sometimes feature great, deep bass which will give your subwoofer a pleasing workout but aren’t quite as immersive as those on the best animated films (admittedly with far bigger budgets).

5 Essential Ingredients to Getting Gruff (5:11, HD): director Steve Loter lists the five things that had to be present to make his film special: a great story with heart, expert design, terrific sound with the perfect voice cast, a talented animation team, and Gruff himself who became the mascot for the movie.

My Dad’s Movie: The True Story of the Neverbeast (5:14, HD): we meet Calista Loter, daughter of the film’s director, who takes us on a tour of the Santa Barbara Zoo attempting to get younger viewers to lose their fear of big animals.

Jeff Corwin’s Guide to Real-World Neverbeasts (3:30, HD): the animal expert introduces us to a succession of some of the world’s strangest looking creatures.

Deleted Scenes (11:07, HD): four scenes, each preceded by introduction by director Steve Loter, may be watched together or separately.

Tink’n About Animals (1:51, HD): Fawn sings a song about the different ways animal groups are classified.

Gruff Love (1:51, HD): actually is a promotional trailer for the film.

Promo Trailers (HD): Inside Out, Aladdin.

Tinker Bell and the Legend of the Neverbeast may not be the best of the six Tinker Bell features produced thus far, but it’s a fun adventure for the small fry and something of an emotional ride even for the grownups. The Blu-ray offers beautiful picture and sound to make the package even more appealing.

Promo Trailers (HD): Inside Out, Aladdin.
Click to expand...


Also, they're trying to move the franchise to some of the sub-characters:
The Pirate Fairy was originally going to be a story focusing on the Queen, and here...well, let's be honest, how many lines has Fawn had in the franchise so far?

Intrada has been steadily releasing the fine McNeely scores lately (Intrada is a great record label, BTW.) While I haven't seen these films, the scores greatly interest me.
You must log in or register to reply here.