By the time the fourth James Bond film arrived – Thunderball – Bond mania was it its peak, and the film was by far the most successful Bond film at the box-office to that time, a record which lasted for quite a few years. MGM is recycling the previous Blu-ray release of this action-packed film in new steelbook casing in anticipation of the twenty-fourth Bond film SPECTRE which is coming very soon to a theater near you. 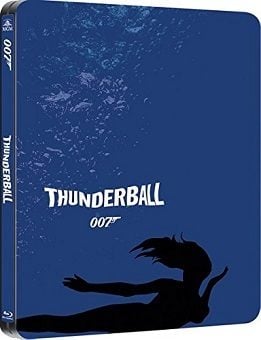 When SPECTRE manages to steal two atomic warheads, it blackmails the British and American governments with the threat of setting them off in either a British or American metropolitan area unless £100 million worth of diamonds is delivered to a soon-to-be-named spot in four days. Naturally James Bond (Sean Connery) is dispatched to investigate, and his gut is telling him the warheads are in Nassau. While there, he meets up with two worthy antagonists: lethal henchwoman Fiona (Luciana Paluzzi) and SPECTRE’s number two man Emilio Largo (Adolfo Celi) who organized the entire operation. During his thrusts and parries with his enemies, he also finds time to fall for Largo’s mistress Domino (Claudine Auger) who isn’t yet aware that Largo killed her brother who was part of the warhead aerial transport team in order to put his plan into operation.

Thunderball signaled the first of the James Bond super-productions. Everything was intentionally expanded from previous entries in the series: more sets, more actors, more explosions, more everything. Bigger isn’t necessarily better, of course, and there are times when the film feels like it might sink in those glorious Caribbean waters of its own hefty weight, but there’s no denying that the film is riotously colorful in its tropical setting and filled with action from beginning (an extended pre-credit sequence that involves a funeral, a fight with a man in drag, and a jetpack) to end (a madcap fight abroad a runaway speedboat headed for certain disaster). Almost a quarter of the movie takes place underwater, sometimes in night shots and sometimes in brighter daytime (which includes the overly extended final duel between the CIA frogmen and Largo’s skilled team of aquanauts). There is also a frantic chase through a parade with the wounded Bond leaving a blood trail and a seaside home with its own live shark tank. Bond’s droll quips capping murders or mayhem of various kinds were also becoming more prominent, and they’re heavily on display here. Terence Young who brought Dr. No and From Russia With Love to the screen with such great aplomb isn’t overwhelmed at all by the size of this enterprise and keeps things moving as well as possible.

As always, Sean Connery is masterful as Bond even if his performance may occasionally seem to be a little wearied. By this time, he was the number one star in the world, and the hectic pace and nonstop attention seems to have been lessening his enthusiasm just a bit in his performance. Claudine Auger makes an adequate Domino, very lovely, of course, but a bit stiff in her line readings. Adolfo Celi’s vocal performance was dubbed by another actor, but he casts a menacing specter across the picture anyway as does Luciana Paluzzi who’s both lovely and lethal. Rik Van Nutter plays CIA operative/Bond friend Felix Leiter in this film, the third in a succession of actors who played the role through the decades. Desmond Llewelyn as usual steals his sequence as Q, and Lois Maxwell and Bernard Lee are comforting presences in the London scenes.

The film was the first in the series filmed in Panavision, and the 2.35:1 theatrical aspect ratio is presented in 1080p using the AVC codec. This is by far the best the film has ever looked with much stronger color and a much cleaner appearance than any previous DVD release of the movie. Sharpness is excellent throughout with impressive detail, and color is solid and very pleasing to the eye with accurate skin tones. Contrast occasionally gets a little hot, and black levels are very good but not the greatest. There’s a bit of line twitter in some automobile grillwork and some slight banding can be glimpsed, too. And the credits are still windowboxed since this is the same transfer as was presented before. The film has been divided into 32 chapters.

The disc offers DTS-HD Master Audio 5.1 and Dolby Digital 2.0 mono sound mixes. The lossless surround mix is quite good through the rear channels go silent for long stretches of time with not even John Barry’s urgent score always creeping into them. Dialogue has been well recorded even with a great amount of looping present and has been placed in the center channel. Explosions seem to fill up the soundstage, but other ambient effects don’t always get the full surround treatment.

Since the disc itself is identical to the previously released Blu-ray, there are no additional bonus features. Thanks to Cameron Yee who has allowed me to use his outstanding summaries of the bonus features from his earlier critique in this review.

Audio Commentary by Director Terence Young and Others: John Cork of the Ian Fleming Foundation returns, following the same scripted format as the other Bond commentaries, combining pre-recorded audio interviews with bits of movie history and trivia, giving listeners plenty to take in.

Audio Commentary by Editor Peter Hunt, Screenwriter John Hopkins and Others: Cork returns as primary commentator and sometime interviewer of the primary participants, making for another focused and informative track. The commentary also includes the entirety of the alternate title song, "Mr. Kiss Kiss Bang Bang" sung by Dionne Warwick.

The Incredible World of James Bond - Original 1965 NBC Television Special (50:54, SD): Retrospective television program hits the highlights of the three films leading up to Thunderball and examines the history of the character and worldwide fervor over the franchise. We've certainly seen a lot of these kinds of promotional pieces before, but it's interesting to see one that only has three films to cover. Imagine having to do one of these now!

A Child's Guide to Blowing Up a Motor Car - 1965 Ford Promotional Film (17:09, SD): A man takes his nephew to visit the set of Thunderball where they're filming a car chase scene. The framing device is kind of hokey (and the finale pretty un-PC) but it's a nice archival look behind the scenes.

Bill Suitor: The Rocket Man Movies (3:54, SD): Suitor talks about how he became a jet pack pilot and what it was like to fly for the film.

Thunderball Boat Show Reel (2:51, SD): Footage of the underwater battle re-edited (and toned down) for a boat show screening.

Selling Bonds - Original 1965 Television Commercials (2:05, SD): Raincoats, slacks and toy spy paraphernalia for sale at a retailer near you. Or at least they used to be.

007 Mission Control: An interesting feature, giving random access to scenes around a particular character or theme, all in 5.1 DTS HD Master Audio and 1080p high definition 16x9 2.35:1 video. Better than skipping through the feature disc? It depends. For fans of the opening title sequence (which has a textless option at a full 2.35:1 with Dolby Digital 5.1 audio), this is an easy way to access it. And obviously users aren't meant to watch all the clips, but only access their favorites; otherwise, why not just watch the feature disc? The one departure from simple clips from the film is the "Exotic Locations" item, which is a montage of film locales with narration by Maude Adams, presented in high definition with stereo audio.

The Thunderball Phenomenon (31:04, HD): A closer look at the film's worldwide popluarity, merchandising and life after its theatrical release.

The Secret History of Thunderball (3:56, HD): A quick look at the varying versions of dialogue and scenes to pop up over the years.

Not the best 007 film but certainly the first of the really big Bond shows, Thunderball has lost none of its power to impress with its size or entertain with its action. This steelbook release is presently exclusive to Best Buy, but Amazon is offering it for sale at its site at a future date, and there are Amazon Marketplace sellers who are asking outrageous sums for this series of steelbooks. For those who haven’t indulged yet in the film, definitely recommended!

Thunderball is a Connery favorite for me. Wonderful score too!
As far as the steelbooks go with the bond 50 set instead.

Look up
Look down
Look out!!!
http://www.the007dossier.com/007dossier/page/thunderball-Radio-Spots


Not everyone wants every movie and some in particular would buy this version for the steelbook.

Not everyone wants every movie and some in particular would buy this version for the steelbook.