Akira Kurosawa, cinematic master, tackles William Shakespeare’s bloody and dark Macbeth and produces something remarkable. Mixing the realism of Macbeth’s evil political rise and fall with Japanese cultural and historical context synthesizes something powerful. Masterfully employing use of traditional Noh Theater (an artistic and at times bold form of Performance Theater), Kurosawa skillfully defines the framing and approach to the material. This helps distinguish the look and tone of the production, resulting in an absorbing creation with vivid performances and a crushing finale. 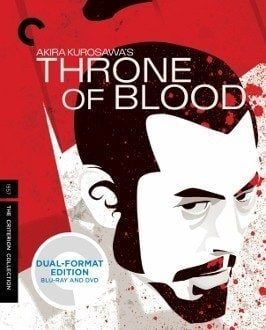 “♫…ambition is false fame and will fall, death will reign, man falls in vain.”

Two brave generals, Washizu and Miki, having successfully defended an attack by their lord Tsuzuki’s enemies (and then defeated them), are summoned by the lord to his Forest Castle for praise in person. Travelling through the Spider’s Web forest, so named for its labyrinthine trails and thick, confusing brush, which protects the lord’s impenetrable castle, they come upon an eerie sight in the depths of the forest, an evil spirit. The spirit offers a prediction of the future, where Miki will be afforded commander of the first fortress and where Washizu will be appointed master of the North Castle – prestigious bestowals. But the evil spirit then offers a foretelling that Washizu will also become Lord of the Forest Castle, currently held by Tsuziki.Upon arrival at the Forest Castle, Miki and Washizu are granted the honors predicted by the evil spirit of the forest. Later, in his new post at the North Castle, Washizu’s wife sews dark seeds of doubt an paranoia, manipulating her husband into believing his childhood friend may tell the lord of the evil spirits prediction and imperil his life as the lord would surely not stand to let him live. Ill-at-ease with his wife’s words, Washizu slowly becomes racked with suspicion and a jealous grip of his power – and the powerful destiny foretold for him. Slaying his lord, Washizu brings about the prophecy – but those around him are struck with unease. Quickly, the tensions and treachery conspire to bring about the downfall of Washizu.Akira Kurosawa’s adaptation of Shakespeare’s bloody but brief play, Macbeth, is an extraordinary work. Finely enveloping the core themes, of how the pursuit of power through evil is a rueful undoing of life itself, with cultural and historical textures of Japan, produces marvelous cinema. Throne of Blood – or it’s more literal translation, Spider Web Castle, is a patient and dark telling of the great British playwright’s not-oft adapted story of the gain of power through evil means. Not merely a transposing of the Macbeth story from the highlands of Scotland of the 11th century to feudal Japan, circa the 15th century, Throne of Blood imbues the historically rich setting of Japan with the key elements of Shakespeare’s tale, and expands upon the motivations and unravelling of Washizu. Filled with Kurosawa’s love of extremes – fog, wind, rain – and with studious framing and gripped with mood, the film offers a remarkably precise view of greatness felled by the bloody quest for power.Film students and enthusiasts of all stripes know of Kurosawa and his indelible impression on the art and craft of movie making, and though his astonishing films Ran (1985), Yojimbo (1961), Rashamon (1950) and Seven Samurai (1954) most commonly roll of the tongue as standouts (or those most referenced), films like Throne of Blood are indeed are among Kurosawa’s most distinguished works. With a haunting quality, tendered by an abundance of fog and dark volcanic soil courtesy of the location filming at the base of Mt. Fuji (and the transportation of that soil for scenes shot in the studio), Kurosawa’s insightful study of duplicity and madness is given great power through Toshiro Mifune’s ferocious performance as Taketoki Washizu. Supported by the ghostly, manipulative calm of Isuzu Yamada as Washizu’s wife, Asaji, and supporting players Monoru Chiaki as Miki, Takamaru Sasaki as Lord Tsuzuki and Hiroshi Tachikawa as Kunimaru, the rancorous son of the slain Tsuzuki, Throne of Blood is gripping.From Shakespeare’s Macbeth:“And when we have our naked frailties hid,That suffer in exposure, let us meet,And question this most bloody piece of work,To know it further. Fears and scruples shake us:In the great hand of God I stand; and thenceAgainst the undivulged pretence I fightOf treasonous malice”

“This new digital transfer was created in 2K resolution on a DFT Scanity film scanner from the original 35mm fine-grain master positive.”

Featuring a new, restored 2K digital film transfer, Throne of Blood is a glorious sight. Though some print detritus remains, particularly noticeable in fades, the detail is strong and contrast superbly defined. Filmed using 35mm (1.37:1 aspect ratio – which is how it is presented here), there is pleasing depth throughout. The use of telephoto lenses – a common Kurosawa tool – expectedly flattens the image, but in close-ups and standard shots as the tensions rise in the Fort Castle, you will see a vivid image displaying of strong dimension. The heavy use of fog in the picture provides a ghostly quality and that comes through very well with this restored image and the sweeps of grey it produces.As noted in the accompanying booklet, the original negative no longer exists and so use of the fine-grain master positive required extensive removal of dirt, scratches and other unwelcome artifacts. The result is indeed impressive. A careful balancing act to clean without scrubbing has been pulled off with nary a hitch.

A remastered original monaural soundtrack from an optical print track (24-bit) has been supplied and it’s terrific. Unwanted clicks, hisses and hums have been removed with skilled hands using Pro Tools HD and the result is a clean audio delivering crisp dialogue – delivered with growls from the actors – incidental score by Masaru Sato, and more, nicely balanced and issue free. The single Japanese mono option is partnered with two English subtitle translation options, one by Japanese film-translator Linda Hoaglund and another by Donald Richie, an expert on the works of Kurosawa. The nature of these two different takes on subtitling are clarified through short essays from the translators.

Audio Commentary featuring Japanese Film Expert Michael Jeck: Originally recorded for the 2003 region 1 DVD release, Michael Jeck provides a professorial and expounding commentary on Kurosawa’s renowned take on Macbeth.Akira Kurosawa: It is Wonderful to Create: A documentary running a little north of 20 minutes featuring archival interviews with Kurosawa and others involved in the making of Throne of Blood.Two Subtitle Options: Two English subtitle translation options have been created, one by Japanese film-translator Linda Hoaglund and another by Donald Richie, an expert on the works of KurosawaTrailer: Original Japanese film trailer.Booklet: Another fine booklet featuring short essays surrounding the film and Criterion’s release.DVD Version: This dual format release features a DVD of the film and extras.

A story of prophecy, power, perfidy, paranoia, and play most foul, Throne of Blood is a marvelous interpretation of Shakespeare’s Scottish-set grim play. Criterion’s continued recognition of this fine work produces a solid high definition release and the care and consideration of the treatment of the surviving film’s assets is commensurate with the importance of the film. Recommended.

I shouldn't of read this. The more reviews of Kurosawa's work, the more I want to check out his stuff outside of "Seven Samurai" and "Yojimbo/Sanjuro". I guess the next 50% off sale can't come fast enough!

And quite possible the best Japanese film ever...
http://www.amazon.co.uk/gp/product/B00CH066CW/ref=ox_sc_imb_mini_detail?ie=UTF8&smid=A3P5ROKL5A1OLE (Hey Criterion...)

I won't even see what that link is because I know it must be for Tampopo...
You must log in or register to reply here.