This is 40 Blu-ray Review

This is 40 brings its midlife crisis to Blu-ray – including two versions of the movie and over 2 hours of extended and deleted material. The Blu-ray boasts solid picture and sound, but the movie itself is sadly uninteresting and overlong. If anything, it’s a reflection of how far we have fallen from Judd Apatow’s earlier work on “The Larry Sanders Show” and Knocked Up to see this movie clock in at around 2 hours and 15 minutes with so little happening in it. Unlike earlier Apatow films where there was plenty of comedy to keep people’s interest, the current film simply doesn’t have enough material to warrant any recommendation. 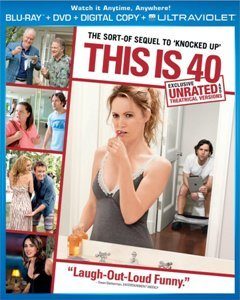 In years to come, people may well look back on This is 40 as the moment when Judd Apatow’s magic touch finally wore off. After a slew of successful comedies from The 40 Year Old Virgin and Knocked Up as well as the ones he’s produced, like Superbad and Bridesmaids, Apatow’s most recent directorial efforts have been marked by crushing lengths and a scarcity of interesting material. But Funny People at least had a promising idea in it before it went to pot. With This is 40, the well seems to have run dry. Ostensibly, the movie tells the story of Pete (Paul Rudd) and Debbie (Leslie Mann), a married couple we previously met in Knocked Up, as they both turn 40 and contemplate where they are in their lives and their relationship. On the surface, that’s a good thematic idea on which to build a comedy, and it’s certainly been done several times. Middle Age Crazy from 1980 comes to mind, as does the more recent attempt, Couple’s Retreat. Whether the idea works depends both on the casting and on whether the story goes anywhere interesting. And the problem with the current movie is that neither idea works out so well. It doesn’t help matters that This is 40 is easily a solid half hour too long to sustain its story. (A friend joked after seeing it that “they left ‘Minutes Too Long’ out of the title!”) It also doesn’t help that there doesn’t seem to be a solid story backbone here. What transpires is more of a series of vignettes that are only vaguely connected. We see that Pete and Debbie each have their own issues, some of which they are hiding from each other. We see that Pete is having eating issues and is struggling with their finances and his needy father (Albert Brooks, giving his usually good performance). We see that Debbie is hiding a smoking habit (which would be impossible, by the way) and is hiding various things from her husband, not to mention her practically dead relationship with her absent father (John Lithgow, looking distinctly uncomfortable here). We see that Pete and Debbie’s little girls (played of course by Apatow and Leslie Mann’s daughters Maude and Iris) also have issues, mostly shown in the form of the older daughter’s interest in the TV series “Lost”. To this is added some intrigue at Debbie’s boutique shop and money problems with Pete’s record label. But none of this material adds up to a cohesive STORY. It’s clear that Judd Apatow was thinking that assembling these various continuing vignettes would add up to a kind of emotional whole, but that simply doesn’t pan out. Instead, all the disparate story threads just lay there. I wish I could say I was exaggerating that I looked at my watch at about an hour in, and I still had no idea what the movie was really about.There are some good performances here, notably Albert Brooks, who pretty much steals all of his scenes. There’s a fun appearance by Rob Smigel as a bicycling buddy of Pete’s, and a brief but funny cameo by radio legend Phil Hendrie. However, a few funny bits scattered here and there are not enough to sustain a movie over two hours long.. The central couple of Pete and Debbie, while attractive and appealing, simply aren’t compelling characters that can enthrall an audience. Beyond that, there simply isn’t anything really interesting happening with them. The problem is accelerated with the amount of screen time given over to the Apatow children. This is not to say that they aren’t cute and amusing children – just that there isn’t anything going on with their characters beyond typical teen and pre-teen angst and petty arguments. The biggest surprise here is that this movie comes from the same Judd Apatow who has previously given us edgy, quirky material, from “Freaks and Geeks” and his great contributions to “The Larry Sanders Show” to movies liked Knocked Up. His career has been built from the same kind of uncomfortable moments of painful comedy that have marked the work of Ricky Gervais and the best segments of SNL. And yet, this movie finds him happily showing scenes with his wife and daughters goofing off on camera. Who would have thought that the same man who wrote some really edgy material for “The Larry Sanders Show” would be devoting several scenes of his movie to his daughter’s interest in an ABC TV show? I suppose that fans of Judd Apatow may want to rent this, but I must warn them that this is a movie that may really test their patience. It may not be the longest shaggy dog story he’s ever told, but it has the least amount of material.This is 40 has been released simultaneously on Blu-ray and standard definition, as of March 22nd. The Blu-ray has everything from the standard DVD, and adds high definition picture and sound, along a lot of additional bonus material and an unrated version of the movie that runs 3 minutes longer. The Blu-ray release includes the DVD release on a second disc within the packaging.

This is 40 is presented in a 1080p AVC 2.40:1 transfer that, as usual for Apatow’s movies, presents fleshtones and the multiple costume fabrics, skin textures and environments quite well. For this movie, Apatow has brought in his latest great cinematographer, Phedon Papamichael (most recently having shot The Descendants) and the shots all look great.

This is 40 is presented in an English DTS-HD Master Audio 5.1 mix in English, as well as standard DTS mixes in Spanish and French, and an English DVS track. As with most Apatow Productions’ comedies, most of the emphasis is in the front channels for the dialogue. The occasional music performances by Graham Parker and Ryan Adams add some punch to the mix, but this isn’t a mix that’s about the atmosphere by any means.

This is 40 is unfortunately not the mature comedy many were hoping would come from Judd Apatow after his last directorial outing, Funny People, came up short. Instead, this is easily his weakest movie. Unlike the last film, this one doesn’t even have a promising idea to hold some of it together. There are a few funny moments scattered here and there with Albert Brooks and Rob Smigel, but that’s not enough to make the 2 hour plus journey worth the time. Fans of Apatow movies may want to rent this, but only with the warning that there are few diamonds to be found here. The Blu-ray package at least provides as complete a look as possible at the making of the film, while also presenting the usually impeccable picture and sound.

I loved this movie and no doubt that puts me in a minority. It's not Judd Apatow's best (Funny People holds that distinction) and as much as I enjoyed Knocked Up, I like seeing Apatow evolve from a guy who makes a movie that has a shot of a baby crowning to a guy that now seems more interested in making James Brooks-style dramadies than making stoner comedies.

Agreed. I also think FUNNY PEOPLE is his best, and this is really his second best. He even says it at one point on the commentary: "I guess this is a comedy."

It's an almost exclusively character-driven, James Brooks-style dramedy that I wish people would make more of.
You must log in or register to reply here.