After ten world titles and three Olympic gold medals, figure skater Sonja Henie relinquished her amateur status, turned professional, and brought her ice show to America where it was seen by 20th Century Fox’s Darryl F. Zanuck who promptly snapped her up for the movies, and the rest is history. Thin Ice was the second of her splashy Hollywood ice skating musicals, and it was such a big hit that it propelled the Norwegian athlete into the ranks of the top ten box-office stars of 1937. As with most of Fox’s star musical vehicles, the songs and (skating) numbers are dropped into its slim plot like so many raisins into a pudding, but with a first-rate cast of supporting players and top notch production values, the movie’s lapses don’t really matter, and the movie proves to be agreeably light if forgettable entertainment. 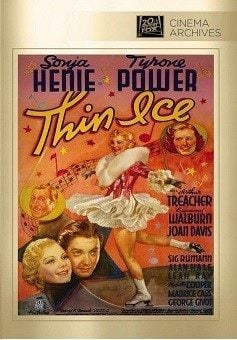 Henie stars as Lili Heiser, the skating and skiing instructor at a luxury hotel in the Alps. As the host locale for an international peace conference, the hotel is honored to welcome crown Prince Rudolph (Tyrone Power) who’s been instructed by his prime minister (Sig Rumann) to keep their country’s rivals (Alan Hale, Maurice Cass) at odds with one another. The prince goes incognito as peasant Rudy Miller and meets Lili on the ski slopes in the mornings where the two fall for one another even though she has no idea as to his identity. Meanwhile, gossips at the hotel spread the word that Lili is dating the prince, and the hotel manager (Melville Cooper), to play up the “charade,” gives her a star spot at the hotel’s ice rink where elaborate production numbers have been mounted for her to star in. But the prince’s superiors back home are none too keen to learn that their royal majesty is cavorting with a commoner.It’s a silly little story that writers Boris Ingster and Milton Sperling have come up with (adapted from the play Der Komet by Attila Orbokas) as a follow-up to Henie’s highly successful One in a Million from the previous year, but it doesn’t put any demanding acting responsibilities on their star, and she can cavort, play coy or outraged or innocent simply as the moods suggest. And, of course, she can take part in three lavish ice spectaculars with a huge chorus of skaters (even if she complains before the first one that she’s had no rehearsal or time to come up with a costume or music). All of it falls into place as that first skating number actually received the movie’s sole Oscar nomination (for dance direction staged by Harry Losee, the last year that category was part of the awards) as she skates to a medley of Alexander Borodin’s Polovtsian Dances. It’s the most impressive of the three (the other two to a Strauss waltz medley and the new tune “Over and Over Again” don't offer the same opportunities of versatility for her) even though Henie’s bag of skating tricks (single axels and toe loops, spread eagles, sit spins and scratch spins though in both directions which is a very impressive feat not many skaters can maneuver) is skimpy compared to the skills today’s figure skaters must master; still, in her day, she did dazzle on the ice. Comedienne Joan Davis has two knockabout comic numbers dropped in from nowhere: “Olga from the Volga” and “My Swiss Hillybilly” which she performs with her familiar pratfall élan, and to get the movie started, singer Leah Rey suggestively croons the movie’s underlying theme with “My Secret Love Affair” in a sub-Alice Faye contralto. Director Sidney Lanfield keeps things running on track even burdened with the rear projection skiing scenes and the nonsensical plot about arguing government officials too intrigued by the prince’s dalliances to mind to their own political business.Sonja Henie shows a better command of the language in her second film and seems more comfortable before the camera. She’s got a real pro opposite her – Tyrone Power who likely helped her appear more natural in her acting; he’s, of course, completely wasted in such a skimpy romantic leading role even though he’s willing to wear outrageous wigs and phony noses to do his part to further foster the film’s foolishness. Arthur Treacher does his stiff-upper-lip best as the prince’s valet, and Raymond Walburn as Lili’s enterprising uncle likewise takes advantage of every situation to feather his own and Lili’s nests. Melville Cooper as the greedy owner of the hotel is reliably calculating as are great character actors Alan Hale, Maurice Cass, and Sig Rumann as the feuding dignitaries.

The film’s original 1.37:1 theatrical aspect ratio is faithfully delivered in the made-on-demand disc. It’s not an especially impressive transfer, however. Sharpness is all right, neither foggy nor crystal clear but decent enough. Grayscale doesn’t boast especially deep black levels, but contrast has been dialed in fairly consistently throughout. But there are definite problems with telecine jitter, some flashing and twitter with line patterns and polka dots, and, of course, scratches and damage along the right edge of the frame. The reel change cues are also present and accounted for. The movie has been divided into chapters every ten minutes so there are 8 chapters present.

The Dolby Digital 2.0 mono sound mix is decoded by Dolby Prologic into the center channel. The volume level of the transfer is quite excessive and needs adjustment to prevent distortion and equipment damage. Though dialogue is clear and understandable and the music and sound effects marry comfortably with it, there is persistent low hiss throughout, and crackle and pops are sometimes quite noticeable and distracting.

Thin Ice is thin on plot but plentiful in entertainment value courtesy of Sonja Henie’s skating presence and the outstanding array of sterling actors who support her in this, her second feature film. It’s a pity the Fox Cinema Archive release does not offer a more pleasing video and audio experience with this vintage title.

I've never warmed up to Sonja Henie whereas I've always really liked Esther Williams who came into movies by a similar route. If this disc had been of better quality I might have bought it as I always enjoy Tyrone Power, but Sonja Henie on a poor quality transfer . . . . No thanks.

I've never minded the reel change cues, they remind me that I'm watching an older movie.
You must log in or register to reply here.