Though its title suggests an abbreviated biography of its subject, Carol Reed’s The Young Mr. Pitt pretty much covers the entire career of England’s youngest-ever Prime Minister. The movie suggests that William Pitt the Younger sacrificed his health, his wealth, and his greatest love in leading his country through one of the most trying periods in its history, but as the screenwriters rather shrug away his sacrifices as they occur, the importance of the things Pitt gave up for his country must be left up to the viewer to decide, a rather curious if refreshing decision made by the writers and ace director Carol Reed that make this biographical film unique if nothing else. 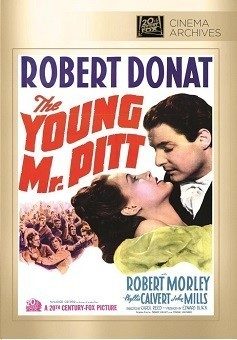 Disgusted by the wholesale treachery and ineffectual rule of the House of Commons, King George the Third (Raymond Lovell) names twenty-four year old William Pitt (Robert Donat) as England’s next Prime Minister. Encountering overwhelming disdain from his fellow members of Parliament, Pitt takes his case for peace and prosperity to the people and receives their overwhelming endorsement silencing his critics, but no sooner does the country begin to get used to flourishing again with record harvest yields and a new naval armada commissioned by Pitt than France undergoes a frightening people’s revolution that threatens the peace of England in the process. Before long, France’s movements to build an empire bring England into war once again with France, and when a young French commander Napoleon Bonaparte (Herbert Lom) rises to power, the war promises to drag on despite England’s wearying of constant combat and the steadily increasing taxes to pay for it.The script by Sidney Gilliatt, Frank Launder, and Viscount Castlerosse was intended to serve in its own fashion, as did the script for MGM’s concurrent Mrs. Miniver, as a propaganda film to rally Americans to the British war cause even though the war covered here involved the skirmishes with the ever-deceitful Napoleon well more than a century before the events of World War II (parallels of Pitt/Napoleon and Churchill/Hitler aren’t cavalierly drawn). Still, the British people come off the lesser in this movie appearing as a harshly fickle rabble ready and eager to support the popular movement of the day without regard to past achievements or forward thinking elders. Of course, Pitt’s first introduction to Parliament where he’s hooted down by his peers making the cacophonous sounds of a barnyard is just the tip of the iceberg in the movie’s seeming disdain for its British subjects, but Pitt’s herculean efforts to watch out constantly for England’s best interests certainly don’t go unheralded. We see him age horrifically over his first seventeen years in office with his health deteriorating (Donat whose own health was often delicate was ideal casting), his all-consuming work ethic causing him to lose his fortune and neglect the girl of his dreams who eventually marries another. Director Carol Reed uses montages quite nicely to cover three distinct periods: William’s growing up period (the young William is played by Geoffrey Atkins), Pitt’s campaign to win the people over, and the French movements toward imperialism, and to his credit, he restrains Donat from chewing the scenery and rather guides him toward one of the more balanced portraits of a politician in film history.The mixture of restraint and grandiloquence in Robert Donat’s performance makes it one of his best though one does wish the various disappointments (his debts, the loss of love, his resignation) he endures during the film might have registered a bit more forcefully as well as his character’s triumphs, especially in his selection against everyone else’s advice of Admiral Lord Nelson to lead the Royal Navy. Pitt remains a bit too saintly for believability with the screenwriters’ approach here. Robert Morley steals the show as the cocky, blustering Charles James Fox, frequent rival and enemy of Pitt’s, but again his character is written somewhat erratically and one isn’t always quite sure where Fox stands on certain issues (other than wanting peace at all costs). Phyllis Calvert delicately plays Pitt’s lost love Eleanor Eden, but the most important woman in his life, his nanny played by Jean Cadell, ages beautifully along with Donat’s Pitt. John Mills has an early role as William Wilberforce, an early Pitt supporter who later comes to have a mind of his own, and Herbert Lom is forceful and memorable as Napoleon (he’d later play him again in King Vidor’s version of War and Peace).

The film’s 1.37:1 theatrical aspect ratio is faithfully delivered in this made-on-demand disc. Grayscale is excellent with rich black levels and pleasing whites and with sharpness and contrast levels generally outstanding throughout. Though there are some scratches and occasional bits of dirt and debris, the transfer’s general look is quite pleasing. There are chapter markers every ten minutes so this film has 11 chapters.

The Dolby Digital 2.0 mono sound mix is decoded by Dolby Prologic into the center channel. Though the dialogue is clear throughout and never is compromised by the background score or the sound effects, there is an incessant low hiss that continues from beginning to end. This is mercifully one entry in the Fox Cinema Archive program that does not require volume adjustment to prevent distortion.

The Young Mr. Pitt offers some genuinely interesting historical and dramatic scenes in the retelling of the life of England’s youngest Prime Minister. The Cinema Archive made-on-demand disc looks very nice for a film of its age.

The print is the cut version. It should be 118 minutes.
You must log in or register to reply here.