With the Fifth Season in the series The Walking Dead set to begin airing this October 2014, AMC has released the Complete Fourth Season on Blu-ray to tide fans over. Akin to that of prior seasons, AMC continues to deliver top notch video/audio presentations, load up this release with excellent audio commentaries, as well as a bunch of behind-the-scenes material to keep fans busy. 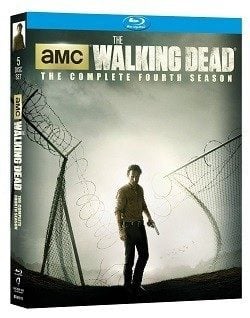 Ever since its origin in October of 2010, AMC's The Walking Dead has become a runaway hit with each season offering an increase in both viewership and quality of programming. In this Fourth Season, the series continues its edge-of-your-seat thrills with the group of survivors searching for a sanctuary called Terminus.As the Fourth Season opens up, we discover that roughly three months have passed since the ending of the Third Season. Originally lead by Rick Grimes (Andrew Lincoln,) in prior seasons, Rick has relinquished his leadership to a council. While life isn't necessarily perfect for these survivors, it is as peaceful as it can be with some developing relationships, and some just trying to take one day at a time. This new sense of hope is torn apart after an influenza threatens the group forcing them to disband and go their separate ways in hopes of finding a cure, as well as the aforementioned Terminus. What results is yet another gripping season in a series this humble reviewer calls one of television's all time bests.It's not the fact that The Walking Dead just so happens to air on AMC (quickly becoming the 'new' HBO in terms of consistent quality series after series.) Moreover it's the sole fact that TWD delivers some of the best human drama, emotion and characters found on TV. Think of who just may be your favorite character on TWD and ask yourself why is he or she your favorite? Whether it be Rick, Lori, Andrea, Dale or heck The Governor (in his twisted ways), In these characters we see ourselves, as they struggle to find hope in this otherwise barren world of emptiness. Some turn to love, some turn to violence. Each have their own methods to cope with this new world, just like we do when we struggle in our daily lives.Simply put, this Fourth Season of The Walking Dead just may be the best yet (something I had previously thought of the prior three seasons at their conclusions.) With solid acting, drama and actual real edge-of-your seat entertainment, AMC knows it has a gem of its hand and won't be letting go of this winner anytime soon.

The Walking Dead: The Complete Fourth Season arrives on 5 BD50 discs with a 1080p, AVC MPEG-4 encoded transfer framed at 1:78:1. Akin to prior seasons, AMC has delivered another excellent release. Black levels are sharp, offering up inky, deep blacks with no instance of smearing or black crush. Detail, despite the series being typically filmed under low-lit situations, still is spot on. Whether it be facial textures of Rick or the actual lush greens of the grass during the exterior moments, AMC knows how to film this gritty series. There's no instance of print damage in this clean transfer, while there is a thin layer of fine grain (used to help capture that aforementioned gritty nature.) All in all, this is a consistently great effort from the folks at AMC.

Arriving with a Dolby TrueHD 7.1 mix with optional English/Spanish subtitles, this lossless mix offers up a fine aural experience. Dialogue is well reproduced with no instance of drop out or muddle, unintelligible conversation. Atmosphere rings throughout the room with crisp, clear effects. Whether it be the 360 degree ringing of a gunfire blast or the sudden dropping low end from an explosion (or from the score,) viewers will easily find themselves thrown right into the middle of the action.

AMC has packed this Fourth Season with a ton of features, both for the casual and diehard TWD fans.Extended Episodes:Featurettes:Audio Commentaries:

With a near top-tier video presentation, a perfect audio experience and a boatload of excellent features, this Fourth Season of AMC's hit series The Walking Dead, comes HIGHLY RECOMMENDED.

Glad this got high marks, thanks for the review Brendan. I bought an exclusive version at Comic Con, but I probably would have passed if I had known it would have only been $30 on Amazon.

Almost sorry I watched these live now, the 7.1 mix sounds terrific! $30 isn't too bad either, will see down the road when my backlog isnt so deep. Thanks Brendan!
You must log in or register to reply here.