Largely ignored by both audiences and Academy voters, Robert Zemeckis’ The Walk is, perhaps, his best film since Forest Gump, a technical achievement in 3D filmmaking that uses that technology to tell the unbelievable but true story of Philippe Petit’s high-wire walk between the twin towers of the World Trade Center in 1974. 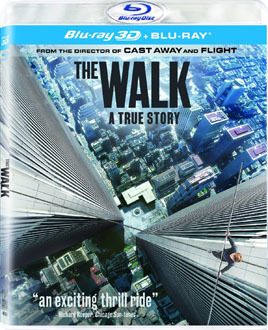 Philippe Petit (Joseph Gordon-Levitt) was living as a street performer in Paris, making money as he did magic tricks, juggled on a tightrope, and other balancing stunts on a unicycle. Wanting to learn more about wire walking, he finds a mentor in Papa Rudy (Ben Kingsley), a circus performer who quite literally shows Philippe the ropes. One day he sees an advertisement for the construction of the World Trade Center in Manhattan, and dreams of attempting the impossible: rigging a cable between the twin towers nearly a quarter mile off the ground and walking across from one tower to the other. He and his girlfriend, Annie (Charlotte Le Bon), fly to New York to see the towers themselves, and he begins to hatch his plan. Upon arriving back in France, he consults Papa Rudy on how to accomplish his goal and quickly assembles a small group of accomplices to help him with his so-called “coup.” As he and his small band return to New York, he befriends Barry Greenhouse (Steve Valentine) who works on the 82nd floor of the South Tower and is a fan of Philippe, having witnessed his walk across the pillars of Notre Dame. He also enlists American Jean-Pierre (James Badge Dale), an electronics dealer who speaks French and has the ability to talk himself into and out of just about any situation. They make the final preparations, figuring out how to sneak into the building and make their way up to the roof with all the gear required to complete the task, despite puncturing his foot on a nail while investigating the construction site..

The Walk starts off slow, but as soon as Philippe and his crew arrive in New York, Zemeckis stages the film as a caper or heist story, a smart move since we pretty much know how the film will end (thanks to the opening narration), making the second and third act more about how they eventually pull off this coup against all odds, setting up the major technical feat of the film, recreating Petit’s walk between the twin towers. Using photo-realistic CGI and state of the art 3D conversion techniques, Zemeckis successfully places the audience on the wire with Petit, something the Oscar-winning documentary Man on Wire could not do. The stunts and camera work on the wire are breathtaking and for some, nauseating (there were stories in the press during its brief theatrical run of people experiencing motion sickness and anxiety during this sequence, particularly in IMAX 3D theaters). Joseph Gordon-Levitt fully immerses himself in the role of Petit, speaking in a believable but sometimes thick French accent (Petit actually trained Gordon-Levitt on how to wire walk, as evidenced in one of the special features). Ben Kingsley, as always, is exceptional as the mentor Papa Rudy, a man who deeply cares for Philippe as a son. Charlotte Le Bon has a believable chemistry with Gordon-Levitt as the girlfriend Annie. The real star of the film, though, is the 3D conversion work performed by Legend3D (see my notes on the 3D ratings below).

The Walk arrived as a Blu-ray and as a Blu-ray/3D Blu-ray combo set on January 7, 2016 from Sony Pictures Home Entertainment. The combo set contains the movie on a 3D Blu-ray and the movie in 2D with bonus features on a second Blu-ray disc. The movie was shot digitally on the Red Epic Dragon camera in 2D, and post-converted in 3D. The 2D version is of reference quality, replicating the film’s theatrical aspect ratio of 2.40:1 and compressed using the AVC codec, with a spectacular detailed image that provides even the finest textures in blades of grass, beard stubble, cracks in cement, etc. Zemeckis and cinematographer Dariusz Wolski have gone with a somewhat muted color pallette, leaning towards greys and blues, with consistent colors throughout. Contrast is exceptional, particularly during the stringing of the wire across the towers in the middle of the night, with deep inky blacks that don’t crush, maintaining detail even in the shadows.

The 3D version ups the ante considerably, adding both extensive depth to the image, especially during many of the overhead shots of Petit on the wire, as well as some fun popouts with the wire appearing to hang out into the viewing area just in front of the TV and Petit’s balancing pole out just in front of your face. I experienced no ghosting or crosstalk on my LG 65UF8500 UHD TV.

The DTS-HD Master Audio 5.1 track (available on both 2D and 3D versions) is a subtle mix that provides a nice immersive sound field. Dialogue is clear and directed mostly to the center channel with some occasional panning effects. Surround activity consists of discrete atmospheric effects such as wind rustling as Petit crosses the wire high above the Manhattan skyline. The score by Alan Silvestri envelops the listener, emanating from all channels. LFE is used most effectively to simulate the tension of the wire when it begins to vibrate. Not quite a demo track, but still effective for this type of film.

First Steps - Learning to Walk the Wire (1080p; 9:11): Joseph Gordon-Levitt, Robert Zemeckis, and Philippe Petit discuss the training regimen to prepare the actor for the role.

The Walk VR Experience: An insert contains a link to download a VR app to your mobile device (Android or iOS) to gain a perspective of Petit’s view atop the World Trade Center. It also includes a $15 coupon off the purchase of a pair of Merge VR goggles.

It’s a shame more people did not see The Walk during its very brief theatrical run this past Fall, myself included. I would have loved to have experienced this on a massive screen in 3D. The good news is that the 3D version still excels even on the home screen, making a fascinating story even more compelling with the added dimensionality and danger of being up on that wire. Zemeckis has always been known for pushing technology in his films (even more so than mentor Steven Spielberg), sometimes at the cost of telling a good story. That is not the case with The Walk, a great mix of technology and superb storytelling. In truth, I wish there was more on this disc about the making of the film, but I guess this will have to do. Highly recommended.


Do you know if the VR app for The Walk is what we saw at the last HTF Hollywood meet in October. The one we saw was attached to a Playstation 4 and it was just AMAZING!!! I've never experienced anything so REAL, to the point that I could not walk on the wire since I "felt" I could fall, even though I was fully aware of where I was. Again it was just AMAZING!

Agreed, Todd, that it is a shame that more didn't get to see this theatrically, also myself included. I just watched THE WALK last week for the first time via DLP front projection, and for me, this was one of if not the best 3-D feature made in 2015.

I was puzzled by the "nudity" warning at the start, forgot about it, then bust a gut laughing once the actual nude scene I was cautioned about commenced.

The actual events were very much a "caper," as related in Man on Wire.


I was really irritated by the way this disappeared from theaters after about a week. I don't have a 3D setup at home.

This movie should have been nominated (and won) an Oscar for best special effects. I for one have never seen special effects like this, watching those shots of him on the wire actually made me feel queasy... it was that realistic - even though I knew that it was shot indoors in a studio. What were the academy members thinking? Or maybe they didn't see the movie? That would explain it.

I also missed this in theaters. I was working OT and didn't get a break to go.

I'm glad it looks great on 3D bluray, it's my favorite 3D disc so far. I know my 55" screen isn't the same as an large IMAX screen, but it's still a really good presentation.

Also a good movie so I can watch more than once and not just demo 3D scenes.