In only her third feature film, actress Joanne Woodward delivered such a tour de force performance in The Three Faces of Eve that it earned her the Academy Award for the Best Actress of 1957 (she also won the Golden Globe and the National Board of Review prizes). Even today, it’s quite a versatile show she puts on, and while Nunnally Johnson’s direction might be only rudimentary and the production itself a fairly low budget affair, Woodward’s fascinating emoting as the multiple personality heroine is still worthy of its accolades. 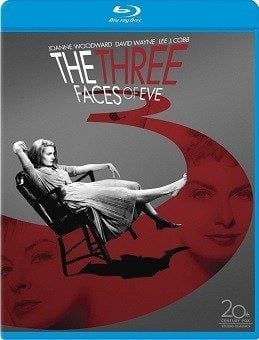 After a series of blackouts and dizzy spells that result in her having a visible personality change that’s driving her husband (David Wayne) to distraction, mousy, tentative Georgia housewife Mrs. Eve White (Joanne Woodward) consults with Dr. Luther (Lee J. Cobb), a well regarded psychiatrist. During her two years of analysis, another personality begins to emerge from within Mrs. White, a hard-partying, sassy creature who calls herself Eve Black. She’s aware of Eve White and doesn’t much like her and as she’s emerging as the dominant personality, she goes and comes from within her when her spirit wills it to the complete ignorance of Eve White. Even after Eve White is made award of the existence of her other personality, she’s helpless to stop her. Strangely, after a time, a third personality makes itself known: a capable, grounded lady who calls herself Jane. But Dr. Luther and his consulting analyst Dr. Day (Edwin Jerome) are interested in finding out the genesis of these multiple personalities and only continued analysis will lead them to finding the answer they seek.The screenplay by director Nunnally Johnson doesn’t pretend to be a dry, analytical examination of the discovery and treatment of Eve White. Rather, it becomes part character exploration (of the three personalities) and part detective story as the doctor plumbs in his sessions with the “three faces” to ferret out some clue that will lead to the traumatic moment when Eve’s personality split was first manifest. Though some may find the eventual answer a bit slick and too easy, it doesn’t minimize the wonderful way that Johnson has provided an entertaining look at so serious a problem given that the clinical book by psychiatrists Corbett H. Thigpen and Hervey M. Cleckley that the script is based on is much heavier and less dramatic than what eventually emerged in the screenplay. Johnson also makes smart use of his wide Cinemascope canvas often placing doctor and patient on opposite sides of the screen or allowing Eve Black during some of her more provocative moments to stretch luxuriously across the width of the frame. Due to the Production Code, of course, Eve Black’s conduct is considerably toned down, and a suicide attempt is discussed after the fact (we do see Eve Black attempt to strangle Eve White’s young daughter, but Johnson has Woodward’s body block much of what she’s doing to the child). Still, for audiences of the day who weren’t familiar with multiple personality disorder, this must have been strong stuff.Occasionally people will complain that Joanne Woodward slides too quickly in and out of her various personas or that she succumbs to hypnosis too quickly, but films were made at the time of the actual person who’s the basis for the story, and her swings into different personas and her susceptibility to hypnosis are on record and are what Woodward studied in preparing for the role. She’s simply marvelous as all three characters, and when Eve White and Eve Black sense their deaths are near, one is even drawn to pitiable regret for their passing. Lee J. Cobb has the dry but necessary role of the psychiatrist who must provide the audience with a gateway to what’s happening on screen, and he’s most effective: calm, patient, even playful with his patient. David Wayne's simpletonish husband Ralph White seems more thick-headed and one-dimensional than would seem necessary. Look quickly, and you’ll see Vince Edwards as a solider Eve Black seduces and then leaves flat, Nancy Kulp as Eve’s mother, and Ken Scott as Jane’s suitor.

The film’s Cinemascope 2.35:1 theatrical aspect ratio is faithfully reproduced in this 1080p transfer using the AVC codec. Though there has been obvious grain removal, it hasn’t intrinsically affected the details in facial features and clothes that such removal sometimes generates. Sharpness is superb, and the rise in resolution has pretty much eliminated the problems with aliasing and moiré patterns which were present in lower resolution versions of the movie. (Those distracting artifacts can easily be seen in the theatrical trailer on the disc as an extra.) The grayscale is very impressive with inky blacks and clear whites with impressive details in the shadows. The film has been divided into 28 chapters.

The DTS-HD Master Audio 1.0 sound mix offers a strong and artifact-free transfer of the mono theatrical presentation. Dialogue is clear as can be, but the use of ADR is very noticeable when it occurs. The sparse but effective music score of Robert Emmett Dolan and the sound effects don’t intrude on the listener’s ability to discern the speech in this heavy dialogue picture.

Audio Commentary: film historian Aubrey Solomon provides an interesting and fact-filled analysis of the movie. There are a few not particularly lengthy gaps in his presentation, but it’s well worth hearing.Fox Movietone News: (2:22, SD) clips from the 30th Academy Awards presentation which features Joanne Woodward’s Oscar-winning acceptance speech.Theatrical Trailer: (2:44, SD)

The Three Faces of Evemay not be as clinical and docudrama like as the more famous TV-movie Sybil (also about a multiple personality disorder and also starring Joanne Woodward but this time as the psychiatrist), but it still plays quite entertainingly as the first of its kind and is worthy of a strong recommendation.

On the audio: Wasn't this originally a 4-track stereo release? I seem to recall Joe Capps mentioning that it was in a thread when the DVD was released around a decade ago.

I've just watched this. I enjoyed it enormously. Very strange that Vince Edwards is uncredited even though his small role has great impact while Douglas Spencer is credited although is non-speaking part is very marginal.
You must log in or register to reply here.