The Theory of Everything Blu-ray Review - Recommended

The Theory of Everything hawks its radiation on Blu-ray with a solid high definition transfer of the movie, which amiably tells the personal life story of perhaps the smartest man on the planet. Anchored by a fine (and Oscar-winning) performance by Eddie Redmayne, this movie covers Stephen Hawking’s life from his college days through his brilliant thesis work to his first marriage, shadowing all of it with the increasing debilitation caused by Hawking’s ALS. The Blu-ray offers this film with great picture and sound, along with a commentary from the director, a few deleted scenes and a short featurette on both the movie and the Hawkings. On the strength of the performance alone, I’m going to Recommend this title for rental or purchase. 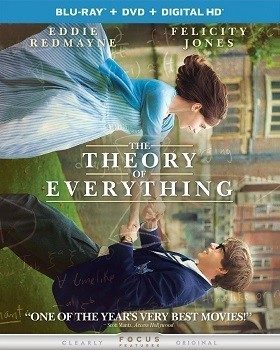 “I think this is the most extraordinary collection of talent, of human knowledge, that has ever been gathered at the White House, with the possible exception of when Thomas Jefferson dined alone.”

Dinner for Nobel Prize Winners of the Western Hemisphere, April 29, 1962

“There should be no boundaries to human endeavor. We are all different. However bad life may seem, there is always something you can do, and succeed at. While there’s life, there is hope.”

The Theory of Everything is a fine movie, particularly if one goes in understanding that the movie is a personal story and not a scientific one. Stephen Hawking may well be the single smartest man living on the planet today, and this movie does touch on his brilliance – but only in relation to the struggles he has faced from day to day due to the degenerative illness that robbed him of his ability to walk, to move and even to speak. The movie presents his life as a love story between Stephen (Eddie Redmayne) and his loyal wife Jane (Felicity Jones), who overcome impossible odds to not only see Stephen achieve international fame but, more importantly, see the couple become the parents of three children. The movie has some wonderful moments where we can see the impact Hawking’s scientific work has had – most of which involve David Thewlis as his professor turned friend. But overriding everything is a sense not of Professor Hawking but of Stephen, the man and husband and father. Given the strength of the central performance and the human perspective on the subject, I am happy to Recommend this Blu-ray for rental or purchase.

SPOILERS: Of course, this is not a significantly deep examination of Stephen Hawking’s life, and we should keep that in mind. Based on his first wife Jane’s book Traveling to Infinity: My Life with Stephen, the movie is mostly an account of how Hawking’s life was transformed by both his intellect and his disease, with his greatest triumphs ironically coming after he was the most physically limited. And this is still mostly a happy story, with many opportunities for the Hawkings to demonstrate their fealty for each other, and for Stephen to take every possible opportunity to be a husband and father. There are definite nods to the real difficulties the couple faced over the years – most notably when an operation necessary to save his life leaves him unable to speak. Eddie Redmayne’s performance provides multiple areas where the struggle just to go up a flight of stairs or to eat at a table become palpably excruciating. But we should also remember that the real Hawking has remarried multiple times since this one, and there is more to the story that is not being told here.

FINAL SPOILERS: Some of the most moving scenes are actually in different relationships than the primary husband-wife focus. My own favorites are the scenes with David Thewlis as Dennis Sciama, a professor and mentor of Hawking’s who would become his friend over time. There are some great moments early on where Sciama’s growing realization of the smarts of his student is quite touching to see. There’s also a more risqué moment later on down the line, where Hawking, now speechless other than his signature voice computer receives a Penthouse magazine and tries to explain it away to his soon-to-be second wife Elaine with the lame standby of “It’s for a friend…” I should note that the movie makes use of the actual voice synthesizer used by Stephen Hawking, with his express consent. I understand they had tried to come up with something else, but when it didn’t work that well, Hawking offered to allow them to use the real one.

LAST SPOILERS: The movie concludes with a visit by the Hawkings (now separated) and their children to Buckingham Palace to be decorated by Queen Elizabeth II. (There’s a great deleted bit from the meeting with the Queen where Hawking accidentally on purpose has the voice computer greet Her Majesty with the immortal war cry of the Daleks: “Exterminate! Exterminate! Exterminate!”) In keeping with the movie’s focus on the couple and their children, the narrative ends with Stephen looking at his children and offering the hopeful comment to Jane: “Look what we made”. As a particularly inspired touch, director James Marsh closes the movie with a brief run backwards through the lives of the Hawkings, returning them to their original state – in a sense taking us back to the beginning of times. It is appropriate that the closing credits are presented over a lovely image of the universe.

The Theory of Everything is presented in a 2.40:1 1080p AVC encode (@ an average 34 mbps). The transfer looks quite good, with the varying lighting palette of cinematographer Benoit Delhomme getting a nice presentation. The recent-period costuming comes across particularly well, as do the textures of various British locales.

The Theory of Everything has an English DTS-HD MA 5.1 mix (@ an average 3.3 mbps, ranging up to 4.7 during some scenes) that mostly works in the front channels, but uses the rears to bring in the music both of Wagner and of Johann Johannsson’s Oscar-nominated score. The subwoofer comes into play here and there – particularly in some of the more dramatic moments of Hawking’s illness.

The Theory of Everything comes with a commentary by James Marsh, a few deleted scenes and a short featurette that features the real Hawkings.

Feature Commentary with Director James Marsh – (AVAILABLE BOTH ON BLU-RAY AND DVD) – This scene-specific commentary by James Marsh goes into exacting detail about the work that Eddie Redmayne did to embody the progressively worse symptoms of Hawking’s ALS. Marsh discusses how even subtle movements by Redmayne are designed to show how the disease was already taking a toll before Hawking fully realized what was happening to him. Marsh also discusses his shot compositions and the work he did with Benoit Delhomme to get the effects they achieved. This is a quiet commentary (Marsh doesn’t get particularly excited at any point) but a very informative one.

Deleted Scenes – (10:45 Total, 1080p) (AVAILABLE BOTH ON BLU-RAY AND DVD) – Here we have 8 deleted scenes, each of which provides a little more of a look at the Hawkings’ life but which were not necessary to the completed film. The final one, which allows the audience to see the Hawkings interact with Queen Elizabeth II, was rejected for being too farcical at a moment when the filmmakers wanted to be more contemplative. The scenes may be viewed individually or via a “Play All” option. Commentary with James Marsh is available for all of the scenes.

Becoming the Hawkings – (7:03, 1080p) (AVAILABLE BOTH AND BLU-RAY AND DVD) – This short featurette offers a bit of on-set footage, as well as a few interview moments with the real Stephen and Jane Hawking. Both are understandably pleased at how they’ve been portrayed in the movie, with Jane Hawking admiring the work of Felicity Jones in capturing her vocal patterns. Stephen Hawking offers some comments in appreciation for Redmayne’s work in capturing what he went through as a husband and father raising three children while suffering from ALS. It is important to note that the Stephen Hawking we see in this featurette is reacting as the man and husband, and not as the brilliant scientist we might all expect to see.

Digital/Ultraviolet Copy – The packaging has an insert that contains instructions for downloading a digital or ultraviolet copy of the movie.

Subtitles are available in English, Spanish and French for the film itself, as well as for the special features. A standard chapter menu is included for quick reference.

The Theory of Everything is a pleasant visit into the lives of Stephen and Jane Hawking, offering a portrait of a couple struggling against a crippling illness. Eddie Redmayne’s performance, now graced with an Academy Award, is a strong anchor for the movie, which resonates more with the humanity of the man than with discussion of his theories. It’s not a particularly deep movie, but it is a moving one, and it’s no surprise that it touched viewers all over the world. The Blu-ray is well-presented, with a fine commentary and a nice visit with the real Hawkings as a bonus. On the strength of the central performance, and on the heart of the filmmakers (as well as a thorough commentary track), I am happy to Recommend this title for rental or purchase.