The debilitating effects of a romantic obsession are captured in haunting, edifying detail in Francois Truffaut’s The Story of Adèle H., his 1975 biographical look at the daughter of Victor Hugo and her plunge into maniacal despair during a critical one year period in her life. The film has its own restrained pacing, and those who loved some of his more manic earlier movies may not find this one much to their liking, but there’s a meticulousness here that reaps big rewards if the viewer is willing to stay with this devastatingly sad true story. 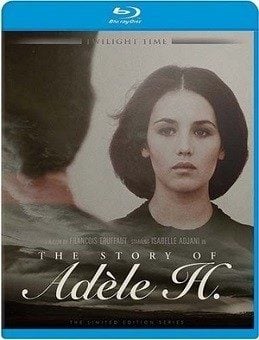 A woman calling herself Adèle Lewly (Isabelle Adjani) arrives in Halifax, Nova Scotia, in 1863 inquiring about the person of a soldier, Lt. Albert Pinson (Bruce Robinson). Though she weaves a tissue of lies as to her reasons for inquiring after him, we come to learn that she’s actually the youngest child of celebrated novelist Victor Hugo, and she has come to Halifax incognito to eventually confront Pinson about their once-upon-a-time love affair, a circumstance she’d now like to resume in a march toward marriage. But Pinson for his own reasons (which might include her delusions, her possible schizophrenia, and definitely her non-stop pleas for his attention at any cost) isn’t interested in resuming what they once might have shared. But his rejections don’t thwart Adèle who simply tries one scheme after another to win his favor but often having to resort to deceit with her forgiving parents as she continually refuses to return home to them and instead pleas for more money to continue to live abroad while she pursues her heart’s desire.

Francois Truffaut, Jean Gruault, and Suzanne Schiffman have fashioned their screenplay from the memoirs of Adèle Hugo, and it’s all of a piece as the troubled young woman, who concocts a series of outrageous stories about her identity and her reasons for her inquiries (her imagination proves she’s a chip off of the old block for sure) makes many attempts to change her lieutenant’s mind, all for naught. (The most preposterous and delightful: a lengthy sequence at a theater where a performing hypnotist played by Ivry Gitlis gives her the idea perhaps Albert could be mesmerized into doing her bidding). And Truffaut doesn’t bother to make the object of her desire something to be cherished; though unaccountably handsome, he’s cold, impassive, impersonal, and his indiscreet womanizing isn’t disregarded: indeed, at one point Adèle watches with both rapt attention and some pleasure through a succession of windows as he carries one lady off to the bed chamber and has his way with her. Truffaut also focuses a bit on the kindly people who surround Adèle: despite her slowly impending madness, she has a group of guardian angels looking out for her: her landlady (Sylvia Marriott), a bookseller (Joseph Blatchley), a bank clerk (Cecil De Sausmarez), a cabbie (Clive Gillingham). But the lady's descent into madness is harrowing to witness as her obsession becomes her reason for living even to the point that she doesn’t even recognize her beloved in the street; she just wanders around aimlessly because that’s what she does each day.

Isabelle Adjani won a great many prizes for her work as Adèle Hugo including Best Actress from the National Board of Review, the New York Film Critics, and the National Society of Film Critics, all of them deeply deserved. She makes the woman’s slow sinking into incontinence completely believable and heartbreaking and emerges as one of the most vivid performances ever in a film directed by Francois Truffaut. Bruce Robinson’s sphinxlike mask as the stalking victim of Ms. Hugo’s obsession works very well since the focus is always to be on her. Viewers might become somewhat frustrated that his feelings about the situation aren’t delved into with more depth, but that’s clearly intentional on Truffaut’s part (the film is called The Story of Adèle H. after all). The lady’s guardian angels are wonderfully played by Sylvia Marriott, Cecil De Sausmarez, Clive Gillingham, and especially Joseph Blatchley (who one suspects carries something of a torch for the lady). Ivry Gitlis also excels during that wonderful hypnotist sequence.

The film is presented with a 1.66:1 aspect ratio and is offered in 1080p resolution using the AVC codec. This beautiful transfer shows off Oscar-winning cinematographer Nestor Almendros’ work wonderfully with outstanding sharpness (apart from one or two long shots) and terrific color reproduction with very viable skin tones. Black levels are rich and deep with shadow detail excelling most of the time. No age-related artifacts turn up during the presentation. When the characters are speaking French, the English subtitles are in yellow and are very easy to read though they sometimes go by quickly. The movie has been divided into 24 chapters.

The DTS-HD Master Audio 1.0 sound mix is typical for its era with the English and French dialogue occupying the mono track in a satisfying manner with Maurice Jaubert’s repurposed music and the sound effects all working together for a rich effect. No age-related problems with hiss or crackle turn up in this excellent encode.

Audio Commentary: producer Nick Redman hosts film historian Julie Kirgo’s enthusiastic commentary on the film. As always factual information and personal reflections are a hallmark of their excellent byplay making this a track to savor.

Another wonderful Francois Truffaut film comes to Blu-ray courtesy of Twilight Time with The Story of Adèle H. The transfer offers a gorgeous picture and crisp sound and some intriguing extras for fans of the film. There are only 3,000 copies of this Blu-ray available. Those interested should go to www.screenarchives.com to see if product is still in stock. Information about the movie can also be found via Facebook at www.facebook.com/twilighttimemovies.