The SpongeBob Movie: Sponge Out of Water Blu-ray Review

As SpongeBob SquarePants enters its 16th year in existence, with the series still going strong, the voice cast and crew found time to explore a second big screen adventure, following up on 2004’s global hit, The SpongeBob SquarePants Movie. The result is a spirited and absurdity-embracing adventure that spans from the enclave of Bikini Bottom, to above the water in a beachside town, and from the present to the future to the past. Moving with great pace, it bounces between jokes, visual silliness, and the core plot at the center of the latest adventure with fluid ease. Doubling the box office take of its 2004 predecessor, both domestically and internationally, the SpongeBob phenomenon shows no signs of slowing down – and with as much fun as you can have with The SpongeBob Movie: Sponge Out of Water, it’s not hard to see why! 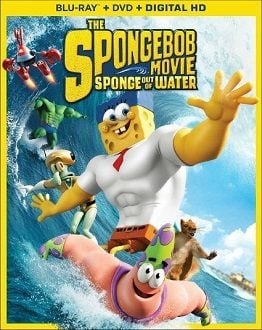 Plankton (Mr Lawrence,) the very small rival to the good people of Bikini Bottom, and in particular SpongeBob SquarePants (Tom Kenny) and Mr. Krabs, owner of the Krusty Krab, where SpongeBob works making the addictive Krabby Patties, executes his latest plan to steal the recipe to those sumptuous patties that draw all the crowds, leaving no patrons for his rival Chum Bucket eatery. Surprisingly he succeeds, but on the verge of getting away with the secret recipe, it vanishes in to thin air. As news of the recipes disappearance (and the resulting shortage of Krabby Patties) grips Bikini Bottom, social order falls quickly into chaos, and SpongeBob and Plankton must work together to find out where the recipe went. Their partnership will have them build a time machine to head into the past to the point just before the plans disappeared – but nothing is ever easy – and complications above the sea, involving a mischievous Pirate (Antonio Banderas,) give rise to a surprising time travelling, beach town adventure.

The follow-up motion picture to the successful SpongeBob SquarePants movie at times feels like two films, with one using the traditional animation style of the television series to show the disintegration of social order as Bikini Bottom descends into an apocalyptic chaos, pitting friend against friend, and another involving the pirate thief Burger Beard, played by Antonio Banderas, in the real world. Certainly these two pieces fit together, but not as snuggly as even the hypnotic madness of the shows presentation would make you think. While there is a good deal of funny to be mined from the crumbling Bikini Bottom, and the uneasy attempt at ‘teamwork’ by SpongeBob and Plankton, it takes a relatively longtime for the film to take the crew ‘out of water’ and, as a result, feels front-heavy. Still, there’s enough energy and silly and absurd fun to paper over some of those assembly cracks and pull you through the bizarre stations with an infections giddiness.

Working from an story he co-devised with SpongeBob creator Stephen Hillenburg, director Paul Tibbitt – longtime producer and frequent writer of the television series – steps up capably to bring every vivid and silly tangent of the screenplay (by Jonathan Aibel & Glenn Berger) to life. Particularly entertaining are the live-action sequences and stop-motion Dolphin animation scenes (featuring the hilarious Matt Berry voicing Bubbles, the powerful dolphin from the future,) where the brightness and happy mood are never compromised by too much reality (or any easy gags from the time travel ingredient.)

SpongeBob’s popularity rests in large part upon its ability to appeal to the young and the old, with layered humor, ample heaps of goof, and legions of silliness. It’s an enormously fun and funny combination that Sponge out of Water continues, enjoying that approach with a delicious array of abstraction and farcicality, soaking up the core time travel idea but never getting lost in it. In fact, the time travel element of the story is pivotal but not at all central, and that makes it all the more accessible. The versatile talents of the voice cast, with Tom Kenny’s SpongeBob, Mr. Lawrence as Plankton, Bill Fagerbakke as the loveable Patrick, Roger Bumpass as Squidward Tenticles, Clancy Brown as Mr. Krabs, and Carolyn Lawrence as Sandy Cheeks, deliver in spades. Matt Berry, the British comedic actor perhaps best known for his role as Douglas Reynholm on the UK’s very funny IT Crowd (or, to some, for his obscure and hilarious Snuff Box,) delights as Bubbles, the dolphin from the future – he’s a scene stealer in a film that rides comfortably on firing off in many directions.

Paramount delivers The SpongeBob Movie: Sponge out of Water on Blu-ray in a sparkling, bright and flawless Blu-ray presentation, framed at 1.78:1 aspect ratio. It’s a delightful presentation enjoying three styles (classic animation, stop-motion animation for Bubbles the dolphin, and CGI/Live-action footage.) The colors and clarity leap of the screen, even in the 2D version reviewed here (a 3D edition is also available.) In fact, the level of detail and clarity is really quite something, with even the texture on the three dimensional, Superhero version of SpongeBob standing out. It’s a genuine treat and fans of the film and high quality HD presentations will be pleased.

The DTS-HD Master Audio 5.1 track is active and energetic, filled with dynamic sounds thrown cleverly about the sound field, and buoyed by a fun score by John Debney. It’s a full audio presentation with energy equal to the action and excitement onscreen. Along with the top-notch computer generated visual effects (particularly involving Antonio Banderas’ characters ship,) the sound effects and design are full throttle, with splendid range wonderfully carried by the lossless track.

There’s some fun to be had with this collection of special features, broken into three groupings with the most behind the scenes focus coming from the On the Surface section. Underwater Awesomeness features more educationally focused special features, while Bikini Bottom Boogie offers fun-focused supplements, including karaoke version of the songs in the film.

DVD version of the film

Digital (Ultraviolet/iTunes) version of the film

The SpongeBob Movie: Sponge out of Water is a good deal of fun. A playful exercise in offbeat, seemingly random and left-field dashes of humor, anchored by a good story and a round of fine vocal performances. It’s hard not to become swallowed up in the mayhem, and with humor appealing to adults, and silly and bright characters and settings sure to engage any younger members of your household, the end result is genuinely solid family entertainment.

The 3D is really good! I'd even go so far as to say that it's good enough to be included in Ron's Top 30 List.

It's a tagging we add once we've posted the review. I reset to the correct tag. Cheers.

My son was dying to see this at the theater so we went to see it. He said he really enjoyed it, and even though I really find SB quite funny at time, this movie IMO was a total bore. I just kept looking at my watch the whole time hoping it would be over. It just didn't have near the wit and fun of the show.


Now, of course since it's on DVD I was told we just HAD to rent it so at least he plans to rewatch it this weekend.