Though known primarily for producing and directing heavy dramas, Stanley Kramer certainly dipped his toes occasionally into the comedy pool especially in the 1960s with his blockbuster It’s a Mad, Mad, Mad, Mad World and one of his biggest hits Guess Who’s Coming to Dinner, an Oscar-winning comedy-drama. The Secret of Santa Vittoria continues his dramedy formula bringing to the screen a sporadically rambunctious, sometimes romantic, and at certain key moments tensely dramatic film. Those differing tones don’t always work harmoniously in the same space, and the film is way too long for its own good, but there are certainly moments to treasure in this spirited romp with some great stars in key roles. 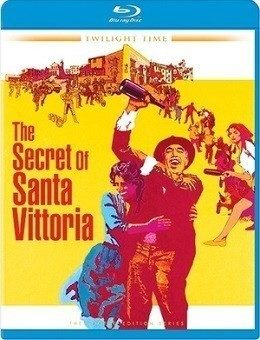 When Mussolini’s power comes crumbling down in Italy near the end of World War II, the town of Santa Vittoria is more than pleased that the fascists who had been bilking their town for two decades are no longer in command. The ousted town power brokers, however, decide if they tap a town dunce to be the mayor, they can continue to operate secretly through their own puppet leader. They choose drunken clown Italo Bombolini (Anthony Quinn) as the new head official, but little do they know that with a German squadron coming to town soon to occupy it, Bombolini will rise to the occasion of leadership in steering his town to pull off a great charade: hiding a million bottles of wine, the town’s primary source of income, from the Germans so they can’t confiscate their goods. Bombolini plays nice with German commander Captain Von Prum (Hardy Kruger), obsequious and accommodating to make the German think he’s dealing with an idiot while the town plays for time hoping the war will soon be over.The script by Oscar-winner William Rose and Ben Maddow does an excellent job with the film’s primary conflict: the town’s wine which must be hidden craftily so the Germans can’t find it (the “secret” of the film’s title). The massive operation to move that many bottles involves the entire village’s population, filmed and framed imaginatively by director Stanley Kramer that emphasizes what a herculean effort it truly was to get this done in a very short amount of time. Where the script stumbles is in trying to cram three different romantic plots into the movie. The primary conflict between Bombolini and his exasperated wife Rosa (Anna Magnani) with the two Oscar-winning stars in their most expressive battle-of-the-sexes flamboyance might have done with more development especially offering Rosa a more gradual realization that the man she’s been disparaging for years has more on the ball than she ever suspected. Instead, time is taken from them for the other two romantic subplots, neither developed enough to justify their inclusion: a love triangle with a local countess Caterina (Virna Lisi), a resistance fighter Tufa (Sergio Franchi), and the German captain, and Bombolini’s sixteen-year old daughter Angela (Patrizia Valturri) interested in exploring her first stirrings of sexual awakening with local college student Fabio (Giancarlo Giannini). The last half hour of the movie is turned into a successfully suspenseful bait-and-switch between the captain and Bombolini who keeps insisting there is no wine for them to find despite every indication that the village had well over a million bottles in storage. Unless one had read the book by Robert Crichton or seen the movie before, it would be almost impossible to predict the outcome of the town’s subterfuge.Anthony Quinn gives in to his inner ham and really exudes life’s very essence as Bombolini, a kissing cousin to his celebrated Zorba the Greek. He’s alternately tender and tough, bellowing and kittenish, drunken and crafty, and above all completely endearing as the town’s very lifeblood. Anna Magnani spends most of the film roaring her frustrated outrage at her husband’s stupidity and drunkenness though the script does afford her some more tender moments in the film’s final half hour. Hardy Kruger is effective as the cocky German officer with less sadism than one usually finds in films like this, and Sergio Franchi and Giancarlo Giannini show explicitly why they were major international heartthrobs even when the screenplay doesn’t offer them golden opportunities to shine dramatically. Virna Lisi is a little bit one-note as the world-weary countess though her beauty is likewise unquestionable whenever she graces the screen. Renato Rascel as Bombolini’s sidekick and Eduardo Ciannelli as a town elder also make memorable if smaller contributions to the story.

The film’s Panavision 2.35:1 theatrical aspect ratio is faithfully rendered in this 1080p transfer using the AVC codec. This is a very film-like transfer with outstanding sharpness and generally excellent color (excepting a couple of very noticeable color fluctuations that occur during the lengthy film). Skin tones are sun baked but certainly realistic for the Italian countryside. Black levels are also mostly very good with just an occasional milky looking tone. Contrast has been applied nicely throughout. The film has been divided into 12 chapters.

The DTS-HD Master Audio 1.0 sound mix seems very true to its era with a solid if unspectacular soundtrack. Dialogue is always well recorded and easily understandable sharing the track with Ernest Gold’s background score and the necessary sound effects without incident. There are no age-related problems at all with this encode.

The Secret of Santa Vittoria won the 1969 Golden Globe as the best comedy/musical of the year, and Twilight Time’s Blu-ray release of the film is an excellent representation of the movie and its memorable if overlong celebration of life. There are only 3,000 copies of this Blu-ray available. Those interested should go to www.screenarchives.com to see if product is still in stock. Information about the movie can also be found via Facebook at www.facebook.com/twilighttimemovies

Thanks for the review Matt! This one is tough for me. I remember when this made its debut on CBS in the mid-70's and I was all gung-ho to see it on the "CBS Friday Night Movie". But I was pretty "meh" after seeing it. Not laugh-out loud funny enough for a comedy, not enough action/suspense for a WWII film. I've seen it several times since on TCM and still have the same indifferent reaction. Glad to see TT has done their usual excellent job on this one and happy for its fans to get it on BD.

I watched this Blu-ray disc last night. I don't recall ever seeing the film before. It is rather long, but at no time was I bored or restless and I didn't get the sense that it should have been shorter. It's not a film I'll watch frequently but I'm glad I bought this disc; at a knock-down price too!
You must log in or register to reply here.