Well folks, finally got to view my newly-acquired Blu for The Secret Of My Success (1987). One of the two most well known (as far as I know) theatrical efforts from Michael J. Fox after his stunning success in Back To The Future (1985), the other being Light Of Day (1987). 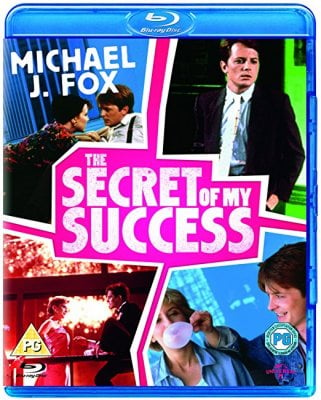 The Secret Of My Success (known from here as SOMS) was released shortly befre Light Of Day (I think), and was pretty much in line with the more comedic tone of MJF films (and his TV series) while Light Of Day was a much more serious effort. This movie featured in title roles MJF himself of course, Richard Jordan (as the high-strung executive Howard Prescott, sadly we lost Richard only 6 years after he did this film), Margaret Whitton as Vera Prescott, the sexy but frustrated wife of Howard Prescott ( and eventual company owner) and in a post Supergirl, post Legend Of Billie Jean (1985) appearance, gorgeous (and still gorgeous to this day) Helen Slater. Helen is stii quite active today in the current 2016 Supergirl TV series as the Earth mom Mrs. Danvers to Melissa Benoist’s Supergirl.

I first saw this film (only once) on HBO cable TV during my, well shall I say, post wedding night. Back then of course we were all still on 4:3 CRT-TVs so the picture quality then was standard HBO fare for the late 1980s. It is kind of funny nowadays looking back at 1980s business technologies (the old green-screen computer terminal and of course almost complete lack of cell phone technology as we know it though car phones were around in the 1980s.

I remember back during my first viewing of this film that the Howard Prescott character (played by Richard Jordan) seemed older back then in 1987. In the blu-ray his character looks younger, more like a young executive hot-shot.

A Luke-Leia ESB Moment or rather brief sub-theme. Michael J Fox’s character Brantley Foster is assigned to chauffeur an executive’s wife, Vera ( Margaret Whitton) Vera of course is an attractive but sexually frustrated woman who takes a fancy to Brantley while on the trip. Of course they end up having a sexual liaison (skinny dipping in the pool for starters) where shortly the discovery is made that Vera is really Brantley’s Aunt Vera (wife of Brantley’s Uncle Howard Prescott). The movie producers mitigate this obvious “yuck” factor by Brantley’s being totally unaware that Vera is his aunt (keeping the audience in the dark initially) noted not by blood but still his aunt. But since this film isn’t nearly as well-known as Star Wars, The Empire Strikes Back (1980) this liaison hasn’t become a cult topic onto itself as the Luke-Leia kiss has become. Still a “yuck” moment though.

PQ (Picture Quality) 4.35 out of 5. Mostly pretty much blu-ray par for the course but a few overly bright moments. No DNR seems to be present. Probably far superior to any DVD release and I say probably as I have never seen any previous DVD release and the DVD seems to be long out of print.

SQ: Stereo soundtrack yields pretty decent sound. Nothing like films of today but quite acceptable.

Technical Aspects. I found the image quality of this Blu-ray very acceptable, pretty much par for a well-produced Blu-ray. I didn’t notice any signs of heavy (and hated) DNR. I did notice some overly bright scenes on this transfer as it seemed they were going more for the shadow detail on this transfer than the highlights.

This Blu came with a stereo soundtrack and the sound was quite acceptable on my system.
You must log in or register to reply here.