Romance is in the air in The Second Best Exotic Marigold Hotel, John Madden’s tender and amusing follow-up to his surprise 2012 hit. There is less personal angst and more romantic tensions present in this sequel, but the ebullient spirit remains intact, and India likewise remains a land of majestic color and grace even with the slew of misunderstandings, jealousies, ambitions, and confusions that figure into the overall scenario. The first one remains the better, more heartrending film, but this second one offers a fine time as we get to know and love all over again some unique and deftly individual persons. 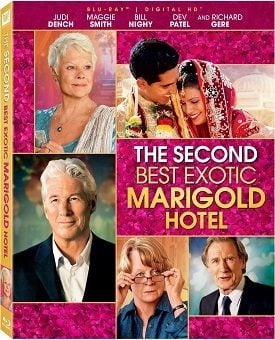 After eight months operating his finally profitable and now popular Best Exotic Marigold Hotel in Jaipur, Sonny Kapoor (Dev Patel) and his newly named manager/accountant Muriel Donnelly (Maggie Smith) land in Los Angeles to secure financing for Sonny to expand his hotel enterprise with a second hotel for his hoped-for chain. They only get vague promises of an inspector coming to check things out before committing to the money, so when Guy Chambers (Richard Gere) shows up claiming to be an author looking for a quiet place to write, Sonny drops everything (including plans for his upcoming wedding to Sunaina - Tina Desai) to accommodate Guy certain he’s the inspector having been sent to ascertain his hotel’s feasibility for an expansion loan. Elsewhere in the hotel, the Britishers who had come there before to retire have actually found for themselves activities to make ends meet: Evelyn Greenslade (Judi Dench) has impressed all with her knowledge of cloth and her ability to barter with street vendors, Douglas Ainslie (Bill Nighy) separated from his nagging wife (Penelope Wilton) and in love with Evelyn now offers the most inaccurate tours for unsuspecting tourists, Norman Cousins (Ronald Pickup) and Carol Parr (Diana Hardcastle) are barely keeping a little bar afloat while Madge Hardcastle (Celia Imrie) has at least three suitors (one of whom even she isn’t aware of) chasing her.

Writer Ol Parker is back for this second go-round (partnered with director John Madden on the original story), and the two have repeated the splintered narrative technique that distinguished the first film. Here, however, with so many of the stories revolving around burgeoning romances or thwarted ones, the movie lacks a bit of variety and offers instead a steady stream of vignettes with the large cast of characters either butting heads with one another or moving ever so slowly toward something: Sonny and his brother Kushal (Shazad Latif) vying for the same piece of property for Sonny’s expansion and also Sonny jealous of his brother’s greater charm and vivacity, Evelyn and Douglas hesitant to make that next step toward commitment, Guy falling instantly for Sonny’s mother (Lillete Dubey), Madge’s dull choice between two (uninteresting) suitors and taking forever to recognize the one who really loves her. The script has a couple of other slight stumbles: the real hotel inspector’s identity is no real surprise at all, and a running gag with Norman believing he’s set a hit man to go after Carol isn’t milked enough to get any decent laughs out of the situation. On the other hand, Parker has given a succession of great lines to both Dev Patel and Maggie Smith, both of whom deliver them with their patented naiveté and dry sarcasm respectively earning the movie’s biggest laughs. Director Madden once again exploits the region’s astounding scope for its joyous color and tone and ends the film with a buoyant Bollywood-style dance number at the wedding celebration.

Dev Patel and Maggie Smith are the lynchpins of the film, Smith narrating it at intervals and Patel a whirling dervish trying to balance wedding preparations and hotel management with his ambitions for expansion. The veteran cast are all nothing if not professional even if what they’re given to do this time around isn’t quite as interesting as in the original: Judi Dench and Bill Nighy dancing around a full commitment, likewise for Ronald Pickup and Diana Hardcastle’s characters who somehow misunderstand where the other is coming from, and Celia Imrie trapped in a rather tedious love triangle that isn’t explored in any depth. Richard Gere brings some sex appeal to the table, but rather than romancing the many ladies who eye him hungrily, he ties himself for one character in particular for the run of the film and negates the possibility of any potential romantic escapades with the English stars. David Strathairn has a couple of effective moments as the financier who’s thinking of investing in Sonny’s dreams, and Shazad Latif shows a great deal of appeal as Sonny’s enterprising brother. Penelope Wilton returns for a cameo trying to convince all of her happiness back home in England and doing a rather crummy job of it.

The film’s 2.39:1 theatrical aspect ratio is faithfully reproduced in this 1080p transfer using the AVC codec. Sharpness is superb throughout the presentation, and color is vibrant and supremely full-bodied without ever blooming. Flesh tones are deeply saturated throughout. Contrast has been applied spectacularly well to give the picture a consistent sheen while black levels are rich and deep. The movie has been divided into 28 chapters.

The DTS-HD Master Audio 5.1 sound mix offers a lively audio presentation with the dialogue beautifully recorded and placed in the center channel. Thomas Newman’s background score gets an immersive presentation through the fronts and rears and really delivers the goods during the two dance sequences (at the engagement and wedding parties). Likewise, sound effects are effectively split when necessary and pan through the soundstage occasionally to great effect.

Stills Gallery (HD): twenty-five color stills of the stars and production which can be stepped through.

Theatrical Trailers (3:42, HD): two trailers which can be viewed separately or in montage.

The characters are so appealing that even if The Second Exotic Marigold Hotel isn’t as fresh a surprise as the original film, it’s still a very nice place to visit for a couple of hours. The Blu-ray offers gorgeous picture and effective sound for a most enjoyable home theater experience.