Doomsday thrillers dealing with lethal viruses are often very compelling in their set-ups and usually a bit of a letdown in the execution. Robert Wise’s The Andromeda Strain had its gripping moments but also ran on too long and became tedious before arriving at its suspenseful conclusion. Wolfgang Petersen’s Outbreak had a terrific exposition but fumbled away its suspense in a ludicrous second half. John Sturges’ The Satan Bug likewise establishes its lethal virus threat which could annihilate the world early and well, but the plotting for the film’s second half relies too much on happenstance for its denouement and ultimately ends up not being the great thriller it might have been. It’s still quite effective in parts, and certainly has some surprises for the audience, but it doesn’t reach the greatness of some of Sturges’ other 1960s movies (particularly The Great Escape or The Magnificent Seven) in terms of beautifully executed thrills. 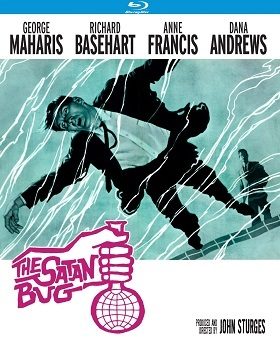 Officials are dismayed to learn that a lethal virus known as “The Satan Bug” along with another less vitriolic toxin has been stolen from Station 3, a secret governmental laboratory doing experiments in chemical warfare. Called in to track down the thieves is Lee Barrett (George Maharis), an ex-CIA operative drummed out of the agency due to insubordination, a man known for not being able to obey orders he disagrees with. Scientist in charge Dr. Gregor Hoffman (Richard Basehart) is at a loss to explain how thieves broke into the highly guarded facility, but a thorough investigation reveals there had to have been an inside man, a mole who for some unknown reason desired the toxic liquid for his own evil purposes. With girl friend Ann Williams (Anne Francis) and her father General Williams (Dana Andrews) aiding in the investigation, Lee snuffs out the guilty parties and also discovers the identity of the mole, not before learning, however, that a beaker of lethal virus has been left somewhere in Los Angeles.

It was very clever of screenwriters James Clavell and Edward Anhalt to install a mystery element to go along with the suspense element already in play here so that we’re wondering both who the mole is as well as how the protagonists are going to stop the viruses from killing us all. They get a little lazy with the solving of their puzzles, however, leaving director John Sturges to have to salvage the movie with some tense action scenes. A scene with our hero and two other FBI agents trapped in an abandoned gas station waiting for one of the hoods to toss in a vial of the virus is wonderfully staged even if tension could have been sustained even a bit longer than it is. There are a couple of unexpected twists along the way as the FBI tries to follow the routes of the escaping villains who have our heroes in their clutches (though how Barrett figures out what he does is glossed over a bit too conveniently). A climactic fight in a crowded helicopter cockpit is a trifle clumsy in the staging and shooting if still effective for its time. The film’s many surprises are nicely revealed for the most part (Anne Francis’ stumbling on the hidden case of toxic vials seems too much a coincidence in a film crammed with them), and the movie’s pacing isn’t sluggish in the least once the main search plot gets going.

George Maharis is a believable enough tough operative even if the script doesn’t allow him as many heroic achievements as his resume read to us earlier in the movie might have suggested (a star today would have demanded many more scenes to display his prowess). Anne Francis is wasted in a nothing role as is Dana Andrews who mainly sits in a room and talks on a telephone for most of the film. More interesting are Richard Basehart as the scientist in charge of the facility and good thug roles for two familiar TV faces: Frank Sutton and Edward Asner who both played heavies early in their careers and then became known for comedy acting much later. John Clarke and Hari Rhodes do solid work as police detectives, and Simon Oakland and John Larkin show up as a government official and a scientist both deeply involved in the events at Station 3. Keep a sharp eye focused, and you’ll see James Doohan as one of the FBI agents attempting the thwart the villains.

The film’s 2.35:1 Panavision theatrical aspect ratio is faithfully delivered in a 1080p transfer using the AVC codec. The improvement over the MGM-MOD release from four years ago is literally night and day with solid and impressive sharpness throughout (only the smallest amount of line twitter is visible, and all of the jaggies and moiré from before are completely gone). Color is also much brighter and reliable with realistic and appealing skin tones. Contrast has been consistently applied throughout. If black levels are only a bit above average and some sporadic dust specks and debris are present, they aren’t usually bothersome. The movie has been divided into 8 chapters.

The DTS-HD Master Audio 2.0 mono track is very typical of its era. Dialogue has been recorded well enough and mixes smoothly with Jerry Goldsmith’s nerve-jangling music and the atmospheric effects of the piece, but the volume level is frustratingly underpowered and lacking drive. Hiss, however, is not a problem nor are any other age-related artifacts of any serious detriment to one’s enjoyment of the film.

Audio Commentary: editor and critic Glenn Erickson offers another well researched, entertaining, and informative commentary filled with book to script comparisons, background information on many of the artists who worked on the movie, and critical reception of the picture. There are only a couple of places in the commentary where comments go silent.

The Satan Bug is an above average thriller which finally gets the home video release it deserves on this Blu-ray disc from Kino Lorber Studio Classics. While there are a few anomalies, picture quality is by far the best it’s ever been for the movie on home video, and the new commentary to accompany the movie is aces. Fans should be more than satisfied with this release.

Thanks for the review, Matt. I have this pre-ordered at Amazon's $11.49 price and I'm happy to hear about the substantial improvement in the PQ. And I'm happy that I never bought the MOD release!

I'm also glad that I never picked up that MOD release...and some of the other MGM MOD's too, thanks to the excellent and very active KINO-LORBER, I can hardly wait to see this new HD of SATAN BUG...

Even though he doesn't have a line in the movie, James "Scotty" Doohan is also in the film as one of the FBI men who fall victim to the nerve gas.

Jack P said:
Even though he doesn't have a line in the movie, James "Scotty" Doohan is also in the film as one of the FBI men who fall victim to the nerve gas.
Click to expand...

Um, I mentioned him in the last sentence of the review proper:


"Keep a sharp eye focused, and you’ll see James Doohan as one of the FBI agents attempting the thwart the villains."

Matt Hough said:
Um, I mentioned him in the last sentence of the review proper:


"Keep a sharp eye focused, and you’ll see James Doohan as one of the FBI agents attempting the thwart the villains."

People don't read your reviews, Matt! They just search for the relevant thread to post their comment!

I agree with Matt's assessment of the Blu-ray. One thing about the story perplexes me. When Barrett and Ann are out in his car they stop to speak with two police officers, who tell Barrett where the car with the flat tire got stuck by the river. This comes out of the blue, because I went back and couldn't find any prior mention of this car. Then, when Barrett and Ann go to check out the location, it's clear that they have no idea whose car it was.


Flash forward to the lab, and no one knows what happened to Barrett and Ann, but they question why Barrett was so interested in __________'s car, so they knew whose car had the flat and they imply that Barrett also knew.


It seems to me that something must have gotten left on the cutting room floor. I was hoping that Glenn Erickson might explain it in his commentary, but he is talking about something else when Barrett stops to speak with the police officers.

Found a 1965 newspaper ad. Apparently the movie had a different title in Newark NJ.
View attachment 22981
You must log in or register to reply here.