David Michod’s The Rover is another one of those dystopian sagas set in a malignant future where things are most dismal and desperate. Like the first Mad Max saga or The Road, the mood is rather minimalist, and while the tale being told is mournful and inevitably tragic, getting to its downcast conclusion involves an interesting dynamic developing between two men who ought to be enemies. With excellent performances from its stars and breathtaking views of this sterile and hopeless planet left after the apocalypse, The Rover offers a nice change of pace if nothing startlingly new in terms of story. 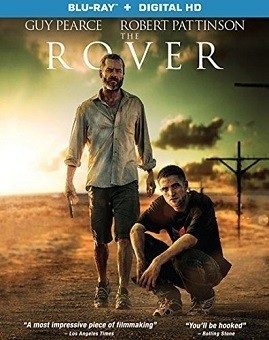 Guy Pearce stars as enigmatic Eric, a man of few words left in the crumbling Australian remnants of this planet after an economic collapse. His car is stolen from him by three men (Scoot McNairy, Tawanda Manyimo, David Field) who’ve just committed a robbery and left one of their crew bleeding and dying on the road. When they wreck their vehicle, they take Eric’s who then gets their truck working and takes off after them. A few guns pointed his way slows him down and allows the crooks to get the upper hand, but the big surprise is that the simple-minded Rey (Robert Pattinson), the brother of one of the robbers who was left behind, didn’t die and makes his way back to the place where he’s discovered by Eric, taken to a doctor (Susan Prior), and patched up so he can lead Eric to the gang’s hideout. Along the way, both men get into individual firefights with those after them and must come to the other’s aid forging a bond between the two that’s more like father and son and making Rey’s inevitable meeting with his brother (Scoot McNairy) sure to be difficult and unpredictable.Desolation and desperation are palpably everywhere in director David Michod’s script (the story was co-written with actor Joel Edgerton who was briefly considered for the lead before Michod determined he wanted an older actor). It’s etched on the faces of every actor in the piece, and the southern Australian locations are as barren and bleak as can be. By placing his down and out two main characters within this landscape and showing us that life isn’t valued as much as a can of petrol or bullets for a gun, we know not to be surprised by any acts of violence which occur, and they do sometimes occur with a shocking and unexpected swiftness. Michod doesn’t flinch from showing us humanity at its most animalistic (a creepy series of crucifixions along the road pass by unmentioned), and yet there are still moments of sheer poetry to be seen. The initial crash of the thieves’ truck is shown in all its silent majesty through a store window eliciting next to no response at all from the patrons inside, and despite the harsh economic conditions, nature still has ways of painting her skies with the most incredible oranges and purples. Ammunition still seems to be plentiful in an otherwise amenities-starved environment (a couple of shootouts rain almost as many bullets as the climactic face off in Bonnie and Clyde), and while Michod’s script doesn’t delve into what exact kind of apocalypse has occurred or why so many different nationalities have immigrated to Australia, we do get some background on Rey’s life and learn particularly about why Eric is being hunted and why he prizes that car so much when the truck he’s been left with seems equally as robust and utilitarian.Guy Pearce gives a solid, sturdy performance of few words (but all of them meaningful and direct). A pure character performance instead of the kind of leading man role that he has been enjoying lately, it’s among the best things he’s done on the screen. But the real revelation is Robert Pattinson who effects a believable American southern accent and plays this damaged, emotionally needy hillbilly with more poignancy and heart than he has shown in any other film portrayal and with not the slightest bit of teen heartthrob on display. Of the supporting characters, Susan Prior is terrific as a sympathetic doctor, Gillian Jones is weirdness personified as a psychic old woman (named “Grandma” in the credits) who can stare down a gun with a centered calm that would unnerve the most ruthless henchman, and Scoot McNairy is fine as the brother who unwillingly left Rey behind.

Shot on film instead of digitally, the transfer offers the theatrical 2.40:1 aspect ratio in 1080p resolution using the AVC codec. Color has been bleached a bit from the final product giving a burned-in look to the visuals (and an occasional green cast in darker scenes). Flesh tones are necessarily rather pale, but sharpness is outstanding, and black levels are very good to excellent. The film has been divided into 16 chapters.

The DTS-HD Master Audio 5.1 sound mix seems more frontcentric than it’s necessary for it to be. Occasionally, the jarring and eccentric music score by Antony Partos will find its way to the rears, but apart from the shootouts, little is done with the rear channels. Dialogue has been well recorded and has been placed in the center channel.

Something Elemental: Making The Rover (44:48, HD): a three-part documentary on the film’s production from the genesis of the idea for the story through its writing, the location shooting, and the filming. Adding expertise on the shooting of the movie are writer-director-producer David Michod, producers Liz Watts and David Linde, director of photography Natasha Braier, production designer Jo Ford, and stars Guy Pearce, Robert Pattinson, Gillian Jones, Susan Prior, Scoot McNairy, David Field, and Tawanda Manyimo.Promo Trailers (HD): Locke, Enemy, Under the Skin, Spring Breakers.Ultraviolet: code sheet enclosed in the case.

An involving look at a dystopian society on the verge of annihilation, The Rover may not be the feel good film of the year, but its story will certainly hold your attention. The Blu-ray offers very good video and audio for a reasonable price.