Mark Rydell’s The Reivers is a bracing coming-of-age tale told with lots of fun and pace but a lack of bombast. It’s not nearly as rowdy or profane as it could have been which makes it play all the more beautifully some four decades later. As a narrative, there isn’t tremendous cohesion between its high points, but the performances are so entertaining and the direction is so confident that it’s pure pleasure to see again after an absence of many years. 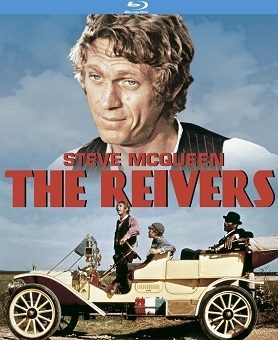 Narrated by Lucius McCaslin (Burgess Meredith) as an elderly man, he recalls the turning point in his adolescence as an eleven-year old boy (Mitch Vogel) in 1905 under the spell of rambunctious hired hand Boon Hogganbeck (Steve McQueen). His grandfather whom everyone calls “Boss” (Will Geer) has just purchased a shiny new yellow Winton Flyer automobile, and when a death in the family takes all the adults away for four days, Boon gathers Lucius up in the car (without permission obviously) for a carefree lark to Memphis where Boon can make contact with his hooker girl friend Corrie (Sharon Farrell). While there, Lucius sustains an injury defending Corrie’s honor from a bratty local kid, gets to spend one night in the whorehouse and another night with a kindly black man (Juano Hernandez) after Boon and stowaway distant cousin Ned (Rupert Crosse) get plunked into jail by a bigoted lawman (Clifton James), and serve as the jockey on a slow-as-molasses racehorse in a contest to win back the car which had been foolishly bartered away.

Based on William Faulkner’s last novel, the screenplay by Irving Ravetch and Harriet Frank Jr. and the direction by Mark Rydell along with the sensational background music of John Williams capture the languid if sometimes frisky southern atmosphere beautifully even if the tale’s episodic nature never explodes into the truly shattering climax we're rather expecting given the narrator's remarks (the boy facing a whipping for his four-day tear is what the story builds to), but its more mollified resolution goes down easily and is quite satisfying. Little Lucius’s introduction to the frivolities and ferocities of adult life (kindly prostitutes with their understanding madam and her less friendly pimp of a husband, racist officials of the law, cheating and conniving humanity) are presented rather matter-of-factly, part and parcel of growing up in this era and in this area. Rydell directs some fun sequences including both mulatto Ned and youngster Lucius’ first times behind the wheel of the car, and the climactic horse race which ends up being run twice is engaging each time with the outcomes always in doubt.

Steve McQueen may get top billing, but it’s really the character played by Mitch Vogel’s story, and the young actor (who was a fixture on American television in the 1970s) handles the joys, disappointments, humiliations, and disillusionments all quite nicely even if the props person sprays too many tears into his eyes too often for comfortable continuity. McQueen himself has never been more appealing: a happy-go-lucky lunkhead out for good times and good memories. Rupert Crosse earned an Oscar nomination for his Ned McCaslin, a distant cousin to Vogel’s character and one man who has his own way of seeing life through his own rose-colored spectacles. Will Geer acts stiff and stern in the early going, but that tenderness underneath is always apparent and much appreciated in the film’s final moments. Sharon Farrell is an engaging and proud Corrie, and Ruth White as the madam Miss Reba is likewise very appealing. There are lots of famous faces dotting the landscape: Michael Constantine as the owner of the brothel, Clifton James as the bigoted sheriff, Lonny Chapman and Allyn Ann McLerie as Lucius’ parents, Diane Ladd as one of the outspoken ladies of the evening, Dub Taylor as the doctor who stitches up Lucius after his tussle, and Vinette Carroll as the caretaker Aunt Callie who allows Lucius to go on his jaunt. Burgess Meredith’s narration is nuanced and quite lovely.

The film’s Panavision 2.35:1 theatrical aspect ratio is faithfully delivered in this 1080p transfer using the AVC codec. Apart from opening and closing credits with the expected soft opticals, the transfer’s sharpness is very strong with close-ups revealing lots of details in faces, hair, and clothes. Color is nicely sustained throughout with appealing and realistic skin tones. Contrast might occasionally vary just a bit from shot to shot, and black levels may not be the last word in inkiness, but overall, the image is quite beautiful. Only a stray dust speck here and there pops in on occasion but never to the detriment of the storytelling. The movie has been divided into 8 chapters.

The DTS-HD Master Audio 2.0 stereo sound mix gives composer John Williams’ first Oscar-nominated original score a beautiful spread through the soundstage with its jaunty rhythms and tight orchestrations given their due. The dialogue track which appears in the center channel is a trifle underpowered and not as well balanced with the music and atmospheric effects as it might have been. Any age-related anomalies have been cleaned up and pose no problems at all.

There are no bonus features on this disc.

One of Steve McQueen’s most popular and memorable films, The Reivers on Blu-ray offers a beautiful picture and above average sound for its many admirers. Recommended!

Thanks for this review, Matt!


I have started to become a Steve McQueen fan in the last several years. It started with The Great Escape and The Thomas Crown Affair...and then I saw Bullitt and thought, "This is an actor I need to see more of." I had never heard of this film and wasn't sure about a blind buy, figuring this is some c-level production. I am glad to read that it is not. I don't do blind buys, but you've made this one I want to look into.

Great review. I have to get this. I' ve loved this film since its release.

And so have I. It's atypical Faulkner. I'll get this as well.

I like this movie very much. However this practice of dropping the 5.1 DVD mix is frustrating me no end!

^but wasn't this mono originally anyway?

Mark Walker said:
Thanks for this review, Matt!


I have started to become a Steve McQueen fan in the last several years. It started with The Great Escape and The Thomas Crown Affair...and then I saw Bullitt and thought, "This is an actor I need to see more of." I had never heard of this film and wasn't sure about a blind buy, figuring this is some c-level production. I am glad to read that it is not. I don't do blind buys, but you've made this one I want to look into.

I'd recommend SAND PEBBLES and PAPILLON as examples of McQueen's skills and unappreciated range as an actor.....enjoy!
E

I worked at the Patterson Theatre when this came out, while I and those who saw it really liked it, it did poorly at the Boxoffice. This was a 1,000 seat first run house. I would like to add about the sound track, we were setup for 4 track magnetic surround. But the the

mag. head s were never replaced when they wore out, in the 1950's. Theatre was built as a CinemaScope Theatre.. Per Fox it was required if you wanted to advertise as a C.Sc

ope Theatre, you had to be equipped for 4trk. mag.. Well if you wanted to hear a film in STEREO you had to go downtown Balto.,Md We would get magnetic prints all the time, as I guess we were still on a list.