found this today wile working on a class project, was unaware that it was even being through of, but for those Animation buffs out there who are willing to help crowd fund the release, i am just passing the information along, OK i also pre ordered because i want to see the rest of George Pal's work have a proper release.


hope some find this useful
Reactions: Darby67, Suzanne.S, PUPPETOON and 5 others

THE RETURN OF THE PUPPETOONS! 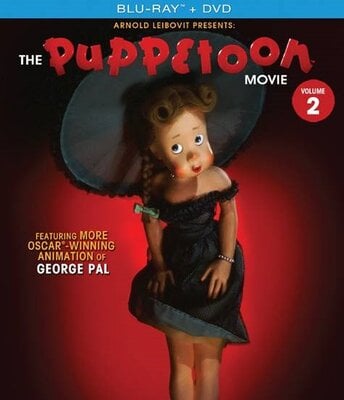 When 1987’s The Puppetoon Movie was finally released to Blu-ray in 2013, it was met with wide acclaim. It was both an animation event and a much-deserved, loving tribute to film pioneer George Pal. Now, prepare for the second volume of these amazing Pal creations, coming soon in a Blu-ray/DVD combo pack!

Producer Arnold Leibovit (The Fantasy Film Worlds of George Pal, The Puppetoon Movie, 2002’s The Time Machine) proudly presents a landmark collection of beautifully restored stop-motion animated shorts. Leibovit’s mentor and friend George Pal began his Academy Award-winning career by creating a series of groundbreaking animated shorts films between 1932 and 1947, utilizing his own puppet replacement technique. These stunning films earned Pal an Oscar, and saw him nominated for several more. Pal later went on to produce or direct such fantasy film classics as The War of the Worlds, The Time Machine, When Worlds Collide, 7 Faces of Dr. Lao, and The Wonderful World of The Brothers Grimm.

This new Blu-ray/DVD set was made possible by the kind assistance of Paramount Pictures (the original distributor of The Puppetoons) and the astounding discovery of several long-lost Pal films from Europe, a few of which will appear on this second volume. The result is a brilliant collection of films that have not been seen in decades, and some never outside of Europe, all meticulously restored in high definition.

Altogether, there are 18 films in the set, which even includes a couple of rarely-seen Pal-produced cel-animated shorts from the 1930s. All films are from original 35mm Nitrate IB Technicolor prints, or the original Three-Strip Technicolor successive negatives. The results are spectacular.

These shorts are all new to home video, except for Ship of the Ether, which appears here for the first time in HD. Of special interest to fans will be licensed appearances in these films by none other than Bugs Bunny and Superman, both at the height of their popularity when these shorts were made!

Cost is $39.95 US, with free shipping within the US. Discs are expected to be ready December 2020.
Trailer for the Blu-ray may be found at:
Puppetoons (High Definition) JASPER GOES HUNTING (1944) George Pal Puppetoon featuring BUGS BUNNY. The first time time Bugs appeared outside of a Warner Bros. cartoon and the only time in a stop-motion and cel animation sequence ~ www.puppetoon.net Arnie, do you have any updates on the work being done on THE WONDERFUL WORLD OF THE BROTHERS GRIMM? A Facebook post you made ages ago gave us all hope.

And congrats on Volume 2 of PUPPETOONS.
Reactions: Darby67

Tim and Arnold, what a wonderful conversation....and i can't wait to be blown away, honestly Vol 1 set a standard that a lot of Animation releases pale in comparison to. I agree all this shall pass, the beauty of this is that granted those of us who are passionate about these shorts, or any film medium are able to "enlighten" those who would have never known about them.

Arnold, thank you for all that you have done, this is definitely shows to have been a labor of love, on your part, with many years of dedication to this.

"Off topic, but on topic" because of the Original, The Puppetoon Movie, that i was able to share with my Granddaughter, that led her to wanting to see more of Mr. Clokey's work, yes my friends; a 6 year old is a serious Gumby and Pokey fan, because of all of this .

Arnold i hope that along with possibly another "The Time Machine", that Warner Brothers is possibly looking at, that maybe they could look as far as there vaults for some more of George Pal's other films, but with HBO Max..... who knows what surprises my be in store, Today's modern audiences marvel at ILM or Pixar, but in the beginning it was O'Brien, Harryhausen, Pal and Clokey, that made the impossible reality, and magic happen.
Reactions: Suzanne.S, Darby67 and PUPPETOON Authoring of The Puppetoon Movie Volume 2 has been in progress for the past several weeks and is now completed. Below is a screen shot of the Encore program in action. I should be receiving the first master Check Disc tomorrow from Steve Stanchfield who has put in a tremendous effort pulling all the separate pieces together. Steve told me he thinks this is one of the most beautiful sets he's ever worked on!