Cinematic school teachers are almost always charismatic individuals who inspire their charges either through their undeniable skills or through their overwhelming personalities. In Ronald Neame’s The Prime of Miss Jean Brodie, we definitely have a case of the latter as the title character uses the years “of her prime” to transform her girls into “Brodie girls,” students whose individuality stamps them for unique positions that Miss Brodie herself assigns them. She’s a dreamer, of course, and deluded in her own fabricated world of romance and grand illusions which often prohibits rational thinking and reasonable expectations which inevitably become clear to her through the auspices of one unique and very unconventional student. 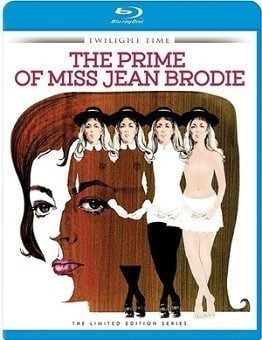 In Edinburgh in 1932, Scottish instructor Miss Jean Brodie (Maggie Smith) begins the new term as she has so many other years in the past letting her students know they are the “crème de la crème” of the pupils at the Marcia Blaine School for Girls. Miss Brodie often veers away from conventional lessons to extoll the virtues of her own interests, reminisce about her lost love, and offer her opinions about literature, art, politics, or anything else that tickles her fancy. Naturally, such unorthodox educational methodology doesn’t go unnoticed, and headmistress Miss Mackay (Celia Johnson) makes it her primary endeavor to rid the school of Miss Brodie and her unusual philosophies. But Miss Brodie has tenure, so getting rid of her won’t be an easy matter unless she can find something immoral that would bring her before the board and warrant her dismissal. But Miss Brodie’s students are loyal, and her past (Robert Stephens) and present (Gordon Jackson) lovers certainly aren’t going to spill the beans about her curricular and extracurricular activities either.Based on the book by Muriel Spark, The Prime of Miss Jean Brodie was a London (for Vanessa Redgrave) and Broadway (for Zoe Caldwell) triumph on the stage in Jay Presson Allen’s dramatic interpretation. Ms. Allen’s script for the film retains all of the stage version’s highlights: Miss Brodie’s long, meandering opinions on everything from Renaissance painting and Shakespeare to her active support of fascist leaders like Mussolini and Franco, her electric encounters with lovers Lloyd and Lowther, her several brilliantly written and performed showdowns with the headmistress, and, of course, the slow transformation of one student (Pamela Franklin) who finally decides Miss Brodie has exerted too much control over too many minds for too long a time and determines to bring her down. Director Ronald Neame offers his usual solid, unshowy directorial hand making Miss Brodie’s picnics with her chosen few special girls and her lectures in and out of the classroom interesting despite the gobs and gobs of talk that might have otherwise doomed it as too stagey an adaptation.And Maggie Smith’s tour de force performance certainly also is a mighty reason the film never sags beneath the weight of all that talk. Smith is such an inventive actress, one who can make eccentricity seem charming and engaging (for a time anyway), and her unaltered conviction that she’s given her life for her girls always seems just this little bit short of the real truth: that she’s the one who’s really benefitting from her center stage play acting earning the annual adulation of these impressionable girls and the amorous advances from the school’s two most available men (one unhappily married and the other an aging bachelor desperate to marry). Miss Jean Brodie is such a formidable role that it invariably brings awards to the actress playing her. Smith received the Academy Award and Britain’s BAFTA award for Best Actress for her performance. Pamela Franklin playing the young girl who matures over five years in the school to transform from Miss Brodie’s loyal charge to a rival and adversary of hers doesn’t quite have Maggie Smith’s domineering personality and focus (few actors do), but she holds her own and convincingly ages from twelve to seventeen (her performance earned her the National Board of Review Best Supporting Actress prize). The best supporting performance in the film is clearly Celia Johnson’s starchy, calculating headmistress Miss Mackay. Even when she’s not present in a scene, the mere mention of her name brings her face and personality straight into the viewer’s mind, and her two primary showdowns with Jean, one in which she is thwarted and the other in which she is triumphant, are the film’s two real highlights. Robert Stephens, married to Maggie Smith at the time of the film’s production, is very effective as the artist Teddy Lloyd who has a true fixation on Brodie but finds himself married and unable to divorce. Gordon Jackson as her other inamorata is just as good as the school’s music teacher Gordon Lowther. Of the other students, the clear standout is Jane Carr as the stuttering, tragic innocent Mary McGregor.

The film is presented in a 1.85:1 faithful theatrical aspect ratio in 1080p resolution using the AVC codec. Overall, the film looks very good with clarity and sharpness which might not be reference quality but which certainly catch the eye. Color is well controlled with flesh tones and hair colors which remain realistic and appealing. Black levels are likewise quite good. The film has been divided into 12 chapters.

The DTS-HD Master Audio 1.0 sound mix presents the multitudes of dialogue with clarity and crispness, none of which is ever compromised by Rod McKuen’s lovely if somewhat spare score and the appropriate sound effects for the period. Age-related audio problems which might have been present have been handled nicely making them a non-issue.

Audio Commentary: director Ronald Neame and actress Pamela Franklin have recorded separate comments on their work in the film and about their careers and are intercut with one another with occasional silent gaps. Neame’s comments are especially interesting as he discusses his philosophies about directing and his agreeable (if somewhat prickly) working relationship with Maggie Smith.Isolated Score and Effects Track: presented in DTS-HD Master Audio 2.0 mono.Trailers (0:55, 3:48, SD) the teaser trailer and the theatrical trailer may be selected from the menu.Six-Page Booklet: contains some color stills from the production, original poster art on the back cover, and film historian Julie Kirgo’s enthusiastic essay on the film.

Another interesting stage play comes successfully to the screen in The Prime of Miss Jean Brodie. Maggie Smith’s triumphant performance is reason enough for acquiring the disc, but the film offers much more in terms of characterization and story as a bonus. There are only 3,000 copies of this Blu-ray available. Those interested should go to www.screenarchives.com to see if product is still in stock. Information about the movie can also be found via Facebook at www.facebook.com/twilighttimemovies.

Great review, Matt. I love this film and enjoyed watching the blu last night, followed by a spin with the commentary. Beautifully written, directed and a textbook of great acting.

Thanks for the great review, Matt. I received my copy yesterday and am looking forward to watching it over the holidays.

Watched it today, looks and sounds much better than I thought it might. Good review!

I actually think it IS reference quality for this particular title. I'm here to tell you the prints never looked this good. And what a movie.
You must log in or register to reply here.