The fourth in the series of prequels to its 1953 animated classic Peter Pan, Disney’s The Pirate Fairy is the first installment in this series in almost four years (released on home video in America but in theaters in other parts of the world). It’s an invigorating tale that features Tinker Bell and her friends involved in a rousing adventure once again attempting to save their beloved segment of Never Land called Pixie Hollow from ruination. The movie offers the family a colorful, action-filled adventure safe for all ages and with a couple of sprightly tunes thrown into the mix. 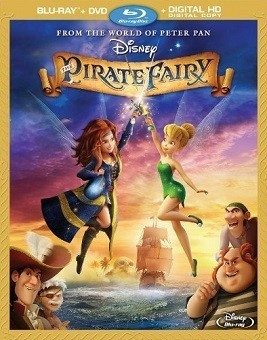 Inquisitive dust fairy Zarina (Christina Hendricks) is constantly getting into trouble with her boss Fairy Gary (Jeff Bennett), and she’s effectively banished from her Pixie Hollow job after causing yet another catastrophe with her precocity. A year later, a vengeful Zarina secretly returns to her home to steal the vial of blue pixie dust, essential for the production of the more familiar yellow dust used for flying. It turns out, in the year since her banishment, she’s become the captain of a band of pirates and is being advised by her cabin boy friend James (Tom Hiddleston) that in order for the pirates to become invincible, they must be able to fly to any land to better be able to plunder and pillage. When Tinker Bell (Mae Whitman) and her friends realize what Zarina has done, they fly off to both recapture the blue pixie dust and try to persuade their friend to rejoin her own kind.Screenwriters Jeffrey M. Howard and Kate Kondell have really brought back the Never Land of our memories into this latest sequel by offering us younger incarnations of Captain Hook and his crew, the crocodile, and a CGI view of Skull Rock among other obvious allusions. There is a great deal of frenzied action reminiscent of that in Peter Pan as the fairies battle the cutthroat pirates and attempt to save Zarina locked in a glass candleholder as Tinker Bell will be one day. The fairy characters retain their appealing quirky personalities from the previous films (even if some of the voice actors have changed since the original Tinker Bell), the pirates are really more comic than scary, and the animation continues to dazzle in its depth and color and creativity (allegedly the film was at one time planned for 3D, and there are certainly sequences which 3D would have greatly enhanced). The film isn’t a musical, but there are two tunes that are notable contained within: Zarina’s theme song “Who I Am” (sung by offscreen voice Natasha Bedingfield and written by Adam Watts and Andy Dodd) and the rousing pirates’ chantey “A Frigate That Flies” (written by Gaby Alter and Itamar Moses).New to the cast is Christina Hendricks as the well-meaning but accident-prone fairy Zarina. Even when she switches sides to the pirates, she never quite loses the viewers’ rooting interest making her a wonderful addition to this Pixie Hollow world. Tom Hiddleston gets to show many sides and colors to his personality as James, and Mae Whitman continues to appeal as Tinker Bell. Her friends who play a greater role in this adventure than in some of the previous ones are garden fairy Rosetta (Megan Hilty), whose southern prissiness rather spotlights her among the crowded field of supporting fairies; water fairy Silvermist (Lucy Liu); animal fairy Fawn (Angela Bartys); light fairy Iridessa (Raven-Symoné); and wind fairy Vidia (Pamela Adlon). Also from previous installments are brief glimpses of Tink’s friend Terence (Jesse McCartney), Queen Clarion (Anjelica Huston), and comic relief Bobble (Rob Paulsen) and Sled (Matt Lanter).

The film has been framed for this release at 1.78:1 and is presented in 1080p resolution using the AVC codec. Sharpness, color density, and contrast levels are all reference quality with the color especially radiant and impressive but without any hint of blooming. There are no banding issues either in this pristine presentation. The film has been divided into 12 chapters.

While the DTS-HD Master Audio 7.1 sound mix is excellent, there isn’t quite as much creative use of all of the available channels as one might have expected. There are some brief bits of directionalized dialogue, but much more could have been accomplished with the numerous fairies flying all around the screen. Joel McNeely’s background score gets excellent separation into the available channels, and there is some ambiance in the fronts and rears but again not as active as one might have hoped for. Dialogue has been expertly recorded and is never overpowered by sound effects or music.

Second Star to the Right: The Legacy of Never Land (4:45, HD): director Peggy Holmes, writer Jeffrey Howard, and producer Jenni Magee-Cook as well as Tom Hiddleston and others discuss their involvement with the project and its lengthy journey to fruition.Crocumentary (4:45, HD): a brief but amusing and informative featurette on crocodiles.Deleted Scenes (0:48, 2:01, 2:33, 2:12, HD): four deleted rough sketched scenes are introduced by director Peggy Holmes and producer Jenni Magee-Cook who explain why they were never developed further for the movie. There is a “Play All” feature.The Making of “The Frigate That Flies” (4:21, HD): a behind-the-scenes look at actors Tom Hiddleston and Carlos Ponce singing and voicing their parts of this tuneful pirate ditty.Short Subjects (1:08, 1:31, HD): two very brief but fully animated comic vignettes with Tink and friends: “Aarrgh!” and “Treasure Chest.”Sing Along Songs (2:25, 2:43, HD): the songs from the film “Who I Am” and “The Frigate That Flies” are presented with sing along lyrics.Promo Trailers (HD): Legend of the Neverbeast, Sleeping Beauty: Diamond Edition, Maleficent.DVD/Digital Copy: disc and code sheet enclosed in case.

A thoroughly enjoyable adventure for the whole family, The Fairy Pirate is a welcome addition to the Pixie Hollow series of Peter Pan prequels. The video and audio quality is splendid, and there are a couple of entertaining bonus features as well. Recommended!

This SHOULD have been released in 3D!
You must log in or register to reply here.