Writer-Director Preston Sturges was the master of the screwball comedy, and he wrote and directed some of the most memorable films of the 1940s. Sullivan's Travels, The Lady Eve, Hail the Conquering Hero, and Unfaithfully Yours are just a few of the Sturges films which every serious filmgoer should see. Now the Criterion Collection brings us The Palm Beach Story, a 1942 comedy starring Claudette Colbert and Joel McCrea, in a sparkling Blu-ray presentation. 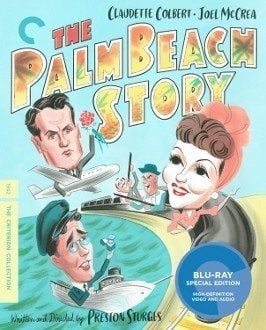 Men don't get smarter as they grow older. They just lose their hair.

A word of advice - pay close attention to the wacky opening title sequence. At first it does not make any sense, but there is a payoff later in the film.

Gerry Jeffers (Claudette Colbert) and her husband Tom (Joel McCrea) live in a fashionable apartment building on Park Avenue in New York City, but there is trouble afoot. The manager of the building (Franklin Pangborn) is planning to evict them due to unpaid rent, and as the film opens he is showing their duplex apartment to prospective tenants, an elderly businessman who calls himself "The Wienie King" (Robert Dudley, giving a hilarious deadpan performance) and his snooty wife.

While the manager shows his wife the first floor, "The Wienie King" wanders around upstairs, unaware of the fact that Gerry is home. When she realizes that he plans to inspect her bedroom she hides in the bathroom, eventually ducking behind a shower curtain before he realizes that she is there. He is immediately beguiled by her beauty and charm, and he figures out that she and Tom are broke. He pulls out a wad of bills and gives her $700 to pay the back rent and to buy herself a new dress and other things.

Gerry then calls Tom and tries to tell him the good news, but he is busy wooing an investor. Tom is an inventor, but apparently not a very good one, which is why he has been behind on the rent. His latest scheme is to build an airport on top of a city, with the runways on steel mesh to allow the sun to shine through, and he is trying to raise $99,000 to build a prototype. When Tom gets home he gets two surprises. First of all, the rent has been paid and bills from the butcher and the grocer and the drugstore have been settled. Then Gerry tells him that she wants a divorce. She is tired of being in debt and she is convinced that Tom will never be successful. He mutters, "That's right. Rub it in."

Gerry persuades Tom to go out to dinner with her, where they get a bit tipsy and later it becomes apparent that she still loves him (viewers will note that they sleep in the same bed, something which was rather daring in a 1942 film). Nevertheless, in the morning she packs a suitcase and heads to Penn Station with Tom in pursuit. She asks the taxi driver about the best place to go for a divorce. "Well, most people go to Reno, Nevada." he replies. "But for my money it's Palm Beach. This time of the year you got the track, you got the ocean, you got palm trees." She arrives at Penn Station with just her pocketbook and the clothes on her back, but she is able to catch a train to Florida thanks to the wealthy, rambunctious members of the Ale & Quail Club.

Mayhem ensues, but during the trip Gerry meets John D. Hackensacker III (Rudy Vallee), an eccentric millionaire who takes a fancy to her. They get off the train in Jacksonville, where they board Hackensacker's yacht and sail to Palm Beach. They are met at Palm Beach by Hackensacker's sister, the oft-married Princess Centimillia (Mary Astor), who has tired of being wed to foreigners and is on the lookout for an American husband. Also greeting the yacht at the dock is none other than Tom, who has flown to Palm Beach in order to get there ahead of Gerry.

The Palm Beach Story combines sparkling, witty dialogue with some very funny slapstick. Claudette Colbert is delightful as Gerry. Colbert had previously demonstrated her comedic chops with her Academy Award-winning performance in It Happened One Night, and she was just as comfortable in dramatic roles. Joel McCrea gives an earnest performance as the oftentimes befuddled Tom. Rudy Vallee is excellent as millionaire Hackensacker, and Sturges gives him the opportunity to sing a serenade to Gerry. As is always the case with Sturges films, The Palm Beach Story has an outstanding supporting cast of memorable and distinctive character actors. Among the familiar faces are William Demarest, Frank Faylen, and Sig Arno.

The 1080p black & white image is encoded with the AVC codec and is properly framed at 1.37:1. The picture is absolutely stunning, a nearly pristine print which almost looks like it was filmed last year. Victor Milner's excellent cinematography has never looked better. For those who are technically inclined, a booklet which comes with this Blu-ray provides the following information:

"This new digital transfer was created in 4K resolution on a Scanity film scanner from a 35mm nitrate fine-grain and a safety duplicate negative. Thousands of instances of dirt, debris, scratches, splices, and warps were manually removed using MTI's DRS, while Digital Vision's Phoenix and Pixel Farm's PFClean were used for small dirt, grain, noise management, flicker, and jitter."

The digital clean-up was done with a gentle touch, and the result is a picture which is remarkably film-like. Contrast is strong throughout and black levels are fine. Whites are consistently stable, and an appropriate level of film grain has been retained.

The only audio track is an uncompressed, 48K LPCM mono soundtrack. It sounds as good as one could possibly expect, given its inherent limitations and age. Every word of dialogue is clear and understandable, and the occasional music also sounds very good.

English SDH subtitles also are available, although figuring out how to use them was a challenge. There is no audio menu on the disc, so I had to use the audio button on my Blu-ray player's remote in order to engage the subtitles.

There are a number of worthwhile supplements on this Blu-ray disc.

First up is a featurette in which film historian James Harvey discusses the career of Preston Sturges, noting that he was "the first real writer-director." The featurette includes numerous still photographs, including a delightful photo of Sturges with the stars of The Palm Beach Story. The running time of the featurette is 17 minutes.

Bill Hader discusses Sturges' work from the perspective of a comedian, often reading for the script for The Palm Beach Story. He points out that Sturges had a tremendous influence on the Coen brothers. This featurette has a running time of nearly 10 minutes.

Also included is a radio adaptation of The Palm Beach Story which aired in 1943. Claudette Colbert and Rudy Vallee reprise their roles, and Randolph Scott fills in for Joel McCrea. The audio is a bit tinny but is generally free of noise. "The Wienie King" is uncredited but reportedly is Mel Blanc, sounding a lot like Elmer Fudd! The radio adaptation has a running time of 30 minutes, which includes original commercials.

Finally, "Safeguarding Military Information" is an official United States Army Training film which was directed by Preston Sturges. The film was made in 1941, prior to Pearl Harbor. It has a running time of 12 minutes and features Eddie Bracken as a soldier who carelessly reveals a ship's movements. Walter Huston also appears as an Army officer.

An enclosed booklet contains a six-page essay about the film by Stephanie Zacharek, film critic for the Village Voice.

The Palm Beach Story is one of Hollywood's best madcap, screwball comedies and it comes to Blu-ray from Criterion with outstanding picture and sound, all supplemented by a decent selection of extras. It comes highly recommended.

"The original monaural soundtrack was remastered at 24-bit from the 35 mm magnetic soundtrack."


Of course, Universal has a vault full of 1940s 35mm magnetic soundtracks. I saw this on my copy and I did wonder what that was all about.

It's quite common to find such a howler and the questions are:


Is it an error because the marketing person writing the blurb has no technical knowledge?


Was there once a mass transfer undertaking to copy all nitrate optical tracks to mag? - but it's not mentioned because (see above).


It's a marvellous film and I look forward to seeing it better than represented on the DVD. I'm hoping it's at least Six Track and preferably Dolby Atmos. If not, let's all complain to the Marketing Department.

"The picture is absolutely stunning, a nearly pristine print which almost looks like it was filmed last year. Victor Milner's excellent cinematography has never looked better."

The sport club shooting scene in the train is still one of the funniest things I've ever seen in a movie. The absurdity, but also the believability (the rich don't have any rules) was perfect.

Hollywoodaholic said:
The sport club shooting scene in the train is still one of the funniest things I've ever seen in a movie. The absurdity, but also the believability (the rich don't have any rules) was perfect.
Click to expand...

The Ale & Quail Club! In one of the extras, Bill Hader says that another director would have ended the scene after the first couple of shots, but Sturges knew it was funny and ran with it.

I just got around to watching this tonight. It's a fantastic screwball comedy, and one of my favorite Preston Sturges movies because it's SO daffy.

Great video transfer and the audio is more than acceptable.

I'm so glad you loved it Matt, it's one of my absolute favorites. People consider SULLIVAN'S TRAVELS to be Sturges' masterpiece (and it's absolutely wonderful) but this may be his most perfectly realized subversive act (in a long history of them.) It's such a deftly written, performed, and executed parody of a romantic, screwball comedy that it plays on the service as though it IS one, until you start to uncover the absolute insanity under the surface. Sturges is less than gently kidding the genre and it's pure gold.

Daffy doesn't even begin to describe it and, trust me, it only gets BETTER with repeated viewings! Enjoy!
You must log in or register to reply here.