The Other Woman Blu-ray Review

A revenge comic farce of noble ambitions but erratic and often tiresome execution, Nick Cassavetes’ The Other Woman does not always make the most of its best assets: a very attractive and talented cast and a few scattered ideas that aren’t tied together at all well in a splintered screenplay that drags its comeuppance out to almost unendurable lengths. Fox has offered a gorgeous high definition video transfer for a film that quite frankly doesn’t deserve it, but those three main ladies in the cast certainly get to show off their assets even when the comic mayhem they’re involved in becomes predictable and stupid. 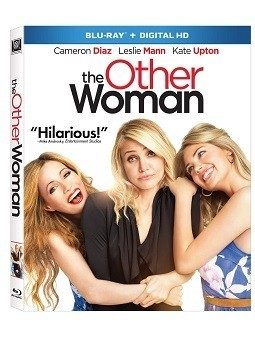 High powered attorney Carly Whitten (Cameron Diaz) enjoys an idyllic eight weeks with new boy friend Mark King (Nikolaj Coster-Waldau) before she learns quite by chance and to her utter dismay that he’s married. When Mark’s somewhat ditzy wife Kate (Leslie Mann) becomes aware of another woman in her husband’s life and goes to investigate what’s going on, the two woman become friends and begin scheming to expose the faithless husband’s lies, but their investigation into his life turns up a series of mistresses, another of whom Amber (Kate Upton) wants to take part in the revenge, and also some shady business dealings that actively implicate Kate and which will take some fancy side-stepping if Kate isn’t to be taken down with Mark once his indiscretions are made public.Screenwriter Melissa K. Stack takes far too long to get the revenge investigation going; the problem is with the character of weak-sister Kate who melts into her husband’s arms whenever he’s nice to her and can’t seem to summon enough inner resolve to make her fidelity to the revenge plan stick. With her inconsistency and yet her irritating motormouth, inability to leave her enormous dog behind at home once they go off on scouting missions (cue the Mission Impossible theme, natch!), and the script which can’t decide if it wants to paint Kate as an airhead or a cloudy genius, the film has a choppy and off-putting tempo that starts and stops more times than is good for the comedy at its heart to work. Another hard-to-take aspect of the story is that with the amount of alcohol consumed during the narrative (which rivals the infamous amount of drinking in Who’s Afraid of Virginia Woolf? though that all happened in one night) and the number of hangovers which the ladies must recover from, it’s a miracle anything ever gets done. With an intelligent lawyer at the forefront of this payback scenario and with the wayward husband completely in the dark about what’s going on behind his back (the ladies aren’t exactly stealthy in their plotting and execution – he has a series of physical setbacks brought on by their scheming without growing suspicious, Carly falls two stories through a wooden overhanging trellis without injury or discovery by Mark – the inevitable comeuppance is actually a foregone conclusion making for a less than satisfying wrap-up. The romantic denouements for Carly and Amber are also telegraphed so far in advance that they, too, don’t offer much satisfaction.With Leslie Mann’s frenetic performance all over the map from start to finish, the film really needs and gets the grounded, solid work of Cameron Diaz who keeps the movie, erratic as it is, chugging along with some degree of steadiness. Nikolaj Coster-Waldau as the model-handsome but thoroughly despicable Mark takes it on the chin for all horn dog males in good-natured fashion. Kate Upton’s major assets for screen celebrity (most of which don’t include much acting ability) are on full and vivid display. Nicki Minaj in her live screen acting debut offers the expected sassy, brassy secretary who changes hair color as she changes her clothes. Don Johnson as Carly’s loving father has a good moment or two during the film, and Taylor Kinney as Kate’s brother Phil offers an alternative male character to Waldau’s cheating, lying schemer.

The film’s 2.40:1 theatrical aspect ratio is vividly reproduced in this reference quality transfer that offers razor sharp clarity and bright detail, eye-popping colors which are always fully contained and which boast realistic skin tones, and contrast that is consistently maintained throughout. The film has been divided into 32 chapters.

The DTS-HD Master Audio 5.1 sound mix doesn’t do much with the rear channels apart from weaving in Aaron Zigman’s background score and an array of pop and rap tunes through the soundfield. For all its New York, Connecticut, and Bahamas locations, there isn’t a great amount of ambience offered in the rears though the front soundstage fares somewhat better.

Deleted/Alternate Scenes ((9:48, HD): eight scenes may be viewed in montage or separately.Gag Reel (3:32, HD)Giggle Fit (5:18, HD): Cameron Diaz and Leslie Mann get a case of the giggles trying to film the end of a specific scene. Some of the giggling was also contained in the gag reel.Stills Gallery (HD): a dozen color still portraits of the three primary female stars of the movie are offered in a step-through gallery.Theatrical Trailer (2:20, HD)Promo Trailers (HD): The Fault in Our Stars, Belle.Digital Copy/Ultraviolet: code sheet enclosed.

Though female empowerment gets a colorful if formulaic celebration in The Other Woman, the comedy for both genders really only works in fits and starts, and there is enough that aggravates about the movie that some won’t make it all the way through it. The Blu-ray does offer a stunning picture with the ladies and the film’s male star all shown off pictorially to great advantage.